All you need to know about Navratri! 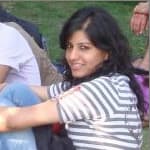 Navratri – one of the biggest Hindu festivals – is celebrated for nine nights to honour Goddess Durga, the most powerful female god of Hindu mythology. Durga invokes a plethora of feelings in her worshippers – fear, love, motherly care and beauty and so on. Much like every other auspicious festival, Navratri also has a number of legends associated with it, which is detailed in the Markandeya Purana.

According to the Hindu mythology, a demon named Mahishasur earned the favour of Lord Shiva after hard penance. Impressed with his devotion, Shiva gave him a boon that no man or deity would be able to kill him. However, there was one tricky clause to that – a woman could kill him. Pleased with this boon, Mahishasur thought that no woman in the three worlds – hell, heaven and earth – could match his might, and so he started killing and torturing everybody mercilessly.

After conquering the earth, he set his eyes upon the abode of the Gods – Indraloka, and after defeating the King of Gods – Indra – he drove all the gods out of heaven. 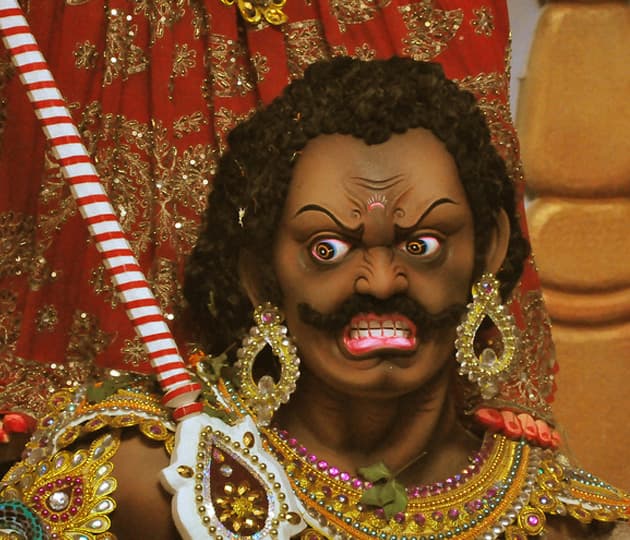 Their defeat and humiliation at the hands of Mahishasur led the gods to take refuge under Lord Brahma. Brahma took them to Lord Vishnu and Shiva. However, Shiva was totally oblivious of all the happenings because he was in a state of deep meditation.

The only solution to end the rule of Mahishasur was to create a woman who possessed the ultimate power to fight and defeat the unconquerable King of Demons. On hearing the atrocities of Mahishasur, Vishnu was furious and a brilliant and powerful energy came out of his being.

This broke Shiva’s meditation too and he angrily opened his third eye, from which emerged a strong light, which merged with the already existing light of Vishnu. Brahma and the other gods also put in their spiritual powers to the energy, which took the form of a female deity, who was radiant and extremely beautiful. 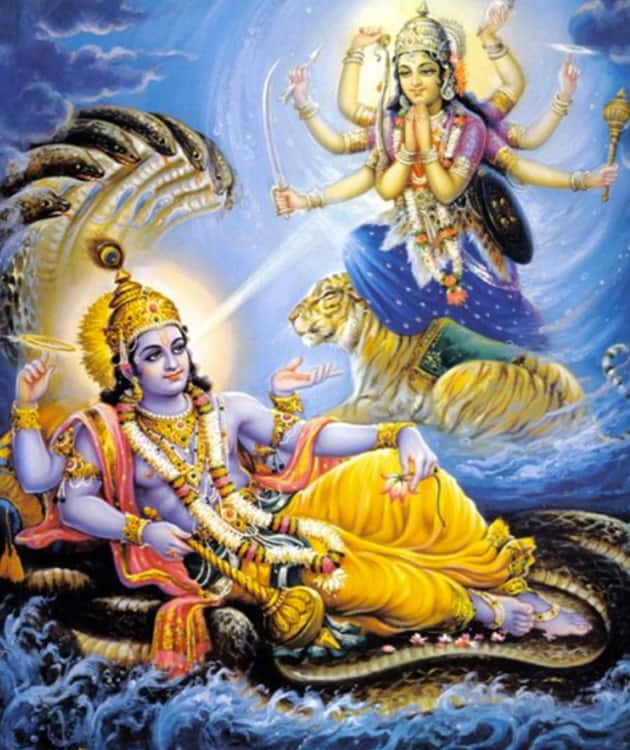 The face of this newly created deity reflected some or the other aspect of each god and possessed unique individual powers of all the ten deities. Since Durga was made from the female energies of the gods and demigods, she was aptly named Shakti. The name Durga was given to her after she had killed a demon named Durg.

When Mahishasur heard of Durga`s beauty, he wished to marry her and sent her a proposal, but she put across a condition – that she would marry him only if he defeated her in a battle first. 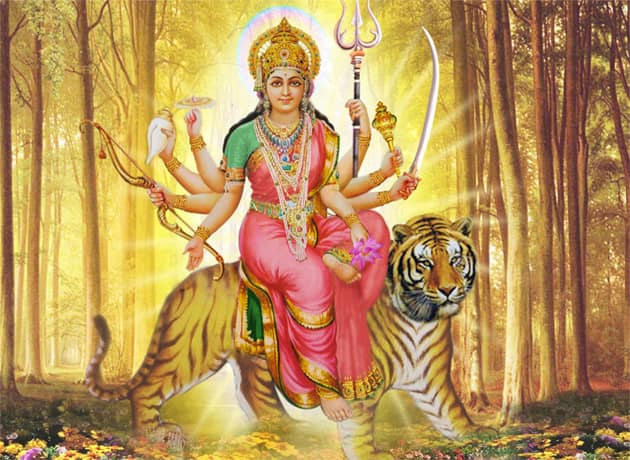 As Mahishasur`s armies were struck down effortlessly by Durga, it became obvious to him that even heaven could not shield him from the Goddess’ wrath. Durga’s power was such that merely her breath would replenish her armies, bringing back to life all her dead soldiers. A chaos ensued among the demons and they were easily defeated and captured.

Mahishasur was enraged and shocked by the disastrous events on the battlefield. He took different forms to kill Durga, but somehow each of his attempts failed. Durga pounced on Mahishasur, pushed him to the ground with her left leg, grasped his head in one hand, pierced him with her sharp trident and beheaded him with her bright sword.

The battle – which went on for nine days and nights – ended with the killing of Mahishasur on the tenth. The nine nights became renowned as Navratri, while the tenth day was called Vijaya Dashami - the day of the triumph of good over the evil. There are various legends associated with the origin of Navratri, but the most important and prevalent among them is the legend of Lord Rama. When Rama was fighting a battle with Ravana to rescue Sita – who had been abducted by Ravana – he decided to seek the blessings of Durga when neither armies stood defeated.

The prayer – which was undertaken by Rama – required 108 blue lotuses, but he could manage to get only 107. He decided not to give up due to lack of a single lotus flower, instead, he thought of offering one of his eyes – which was lotus-shaped and blue in colour – at the Goddess’ feet.

As he was about to offer his eye, Durga – who was satisfied with his devotion – appeared before him and gave him her blessings, owing to which Rama won the battle against Ravana. The season during which he had performed this prayer was spring and the tradition of celebrating Durga Puja has continued since then. 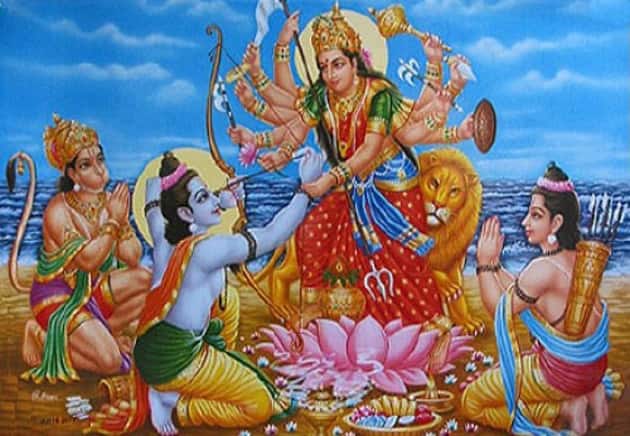 The Legend of Uma

Daksha - the king of the Himalayas - had a beautiful daughter called Uma, who wanted to marry Lord Shiva since her childhood. But Daksha disliked Lord Shiva and his appearance disgusted him. After Uma married Shiva, Daksha broke all relations with his daughter and son-in-law. He then planned a yagna, in which all were invited except for Shiva. Uma was greatly hurt by her father`s rude behaviour and she immolated herself in the yagna fire. However, she was reborn as Parvati and married Shiva again, thus restoring peace to the world. 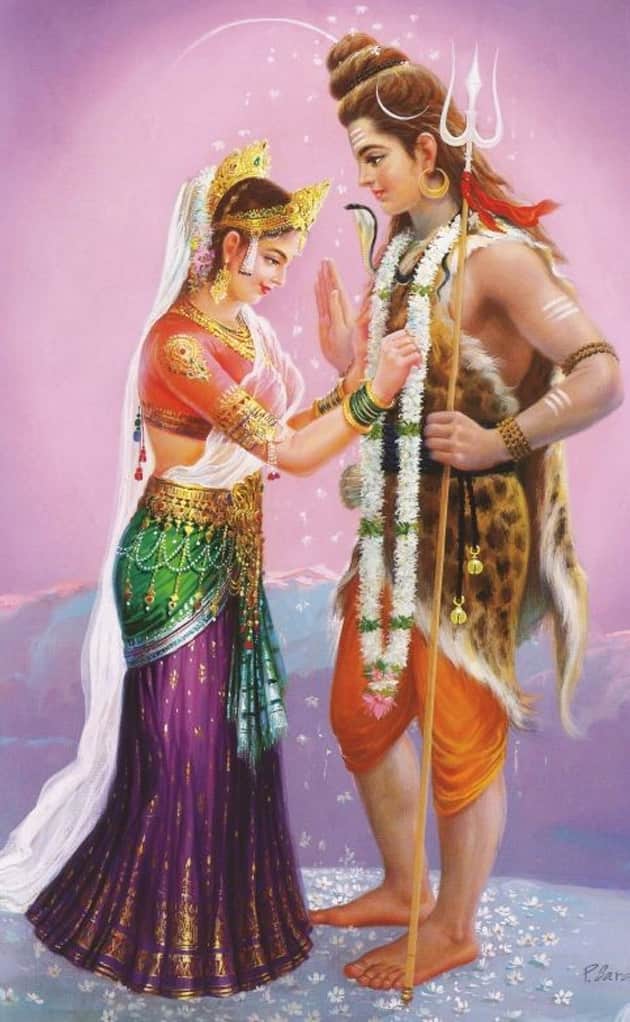 It is believed that since then, Parvati or Uma comes to the earth every year to visit her parents’ home during the nine days of Navratri.