Bayern Munich showed no mercy against fifth division outfit Bremer SV and marched to a 12-0 victory by courtesy of Eric Maxim Choupo-Moting's four goals at the close of the first round of the German Cup on Wednesday. 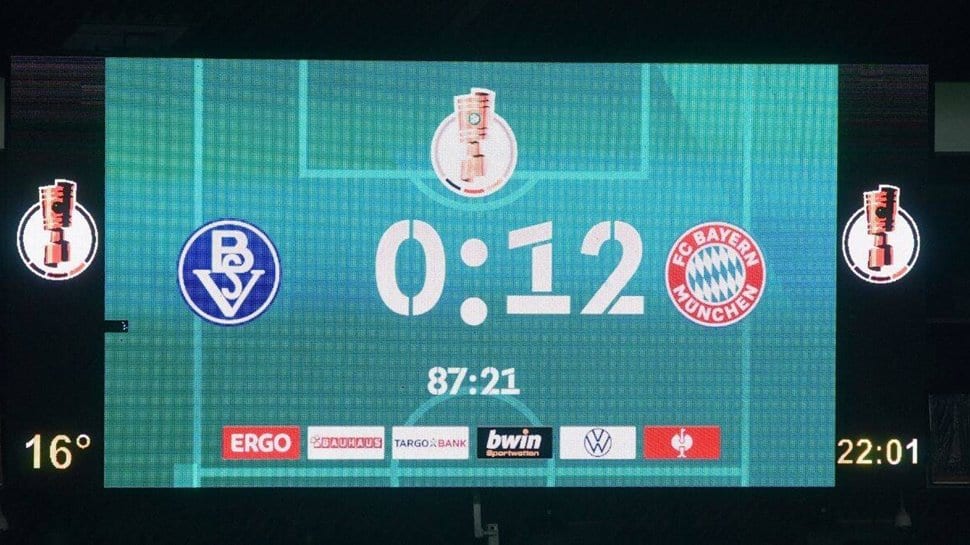 Berlin: Bayern Munich showed no mercy against fifth division outfit Bremer SV and marched to a 12-0 victory by courtesy of Eric Maxim Choupo-Moting's four goals at the close of the first round of the German Cup on Wednesday.

Germany`s richest club took the business seriously from kick-off and took a five-goal lead within 35 minutes and scored another seven in the second half left to end the demolition at 12-0.

Bayern broke the deadlock with only eight minutes on the clock after Leroy Sane assisted Choupo-Moting, who's powerful shot ended in the roof of the net.

A dozen goals see us through to the next round

Choupo-Moting remained in the thick of things and traded passes with Jamal Musiala, who penetrated the box before drilling inside the goal to help Bayern take a 2-0 advantage in the 16th minute.

Then Bremer SV helped Bayern Munich to make it three in the 27th minute as Jan-Luca Warm cleared Musiala`s attempt into his own goal. The hosts failed to endure the attack of Bundesliga champions as Choupo-Moting completed his first-half hat-trick with seven minutes still remaining in the opening half.

The German giants continued on the front foot and picked up from where they left as Malik Tillman intercepted a misplaced pass to make it 6-0 early in the second half. Two minutes later, Musiala sealed his brace after hammering Choupo-Moting`s build-work into the top right corner.

Leroy Sane then got his name registered on the scoresheet in the 65th minute.

Things went from bad to worse for the hosts as they were reduced to 10-men in the 77th minute after Ugo Nobile's foul.

Relentless Bayern remained in search of more goals as Michael Cuisance made it 9-0 before Choupo-Moting snatched his fourth goal of the night in the 82nd minute.

Ten goals were still not enough for the Bavarians as Bouna Sarr and Corentin Tolisso rounded off to make it 12-0 in the end.

"I am not fully satisfied with the first half as we gave Bremer SV too much space for counterattacks. We played way better in the second half. After the first half, we knew we would win the game, but we kept going. I like the way how we continued offensively," Bayern head coach Julian Nagelsmann said.

"I knew to play against Bayern Munich is a whole different story. We tried but we simply couldn`t hold the pace," Bremer SV head coach Benjamin Eta said.