The victory saw Madrid climb to third place on 36 points, three ahead of Sevilla who have failed to win in their last four league outings, while Barcelona, who host Leganes on Sunday, are top with 43. 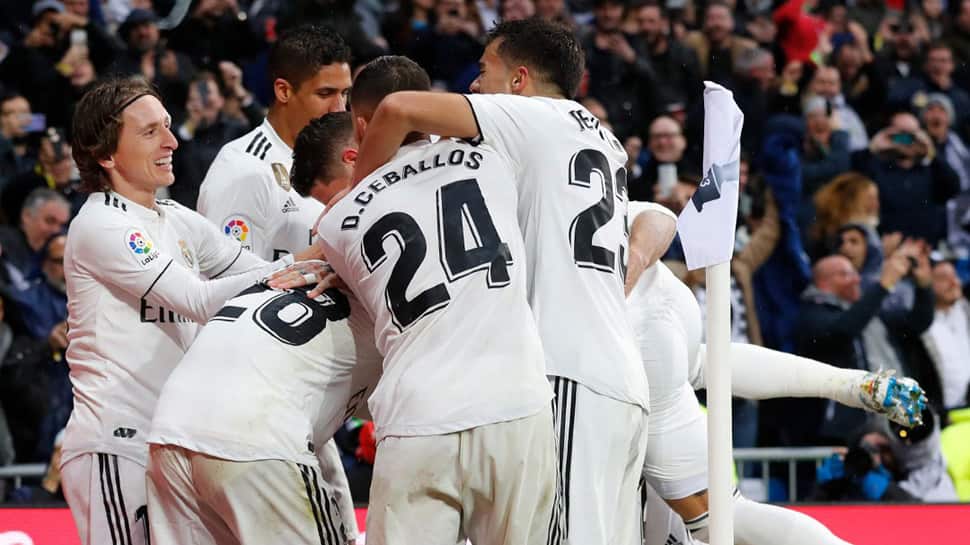 Real Madrid earned a therapeutic 2-0 victory at home to Sevilla with late strikes from Casemiro and Luka Modric as Santiago Solari`s stuttering side leapfrogged the Andalusians into the third spot in La Liga on Saturday.

Brazilian midfielder Casemiro unleashed a stinging shot from outside the area which was too powerful for outstretched keeper Tomas Vaclik, giving the European champions a deserved lead in the 78th minute after they dominated the second half.

Teenage forward Vinicius Jr was again Madrid`s most dangerous outlet and had come close to breaking the deadlock with a scooping shot that just crept wide of the post before Casemiro finally broke the deadlock.

Dani Ceballos, the match-winner in last week`s scrappy 2-1 victory at Real Betis, had also earlier hammered the bar as Madrid took the game by the scruff of the neck at a rainy and cold Santiago Bernabeu after a drab first half of few chances.

Modric finally sealed the victory in stoppage time with a cool finish, giving Solari`s team a second straight win after their poor start to 2019, having drawn at Villarreal and lost at home to Real Sociedad.

The victory saw Madrid climb to third place on 36 points, three ahead of Sevilla who have failed to win in their last four league outings, while Barcelona, who host Leganes on Sunday, are top with 43.

"We needed a game like this. It was a magnificent performance, we dominated every phase of the match," said Real captain Sergio Ramos.

"We scored the chances we needed to, we could have scored more but we`re very happy. We really wanted to win emphatically in front of our own fans. We put them (Sevilla) under pressure from the first minute and we got our rewards. This was a vital win for us," he added.

Solari again left out experienced left-back Marcelo, in favour of youngster Sergio Reguilon, and Spain midfielder Isco but was boosted by the return of Lucas Vazquez from suspension and Karim Benzema, who wore a bandage on a fractured finger.

Benzema teed up Vinicius early in the game but the Brazilian fired straight at Vaclik.

Sevilla, who have lost momentum in the new year after making an impressive start to the season, had only one chance of note in the whole game, which left back Sergio Escudero put just wide of the near post.

Sevilla midfielder Pablo Sarabia criticised his side for not showing more ambition.

"We are not feeling good, the team is feeling very down because we tried to defend but we needed to offer more in the second half, we could barely get beyond their half. His teammate Ever Banega was even more critical, saying: "In the second half we were a disaster,"Sarabia said.