Lionel Messi doubling down on Champions League pledge for Barcelona

Messi`s first act as Barcelona captain was to tell the club`s fans at a pre-season friendly in August against Boca Juniors that he and his teammates "will do everything possible so that beautiful and desired cup returns to the Nou Camp". 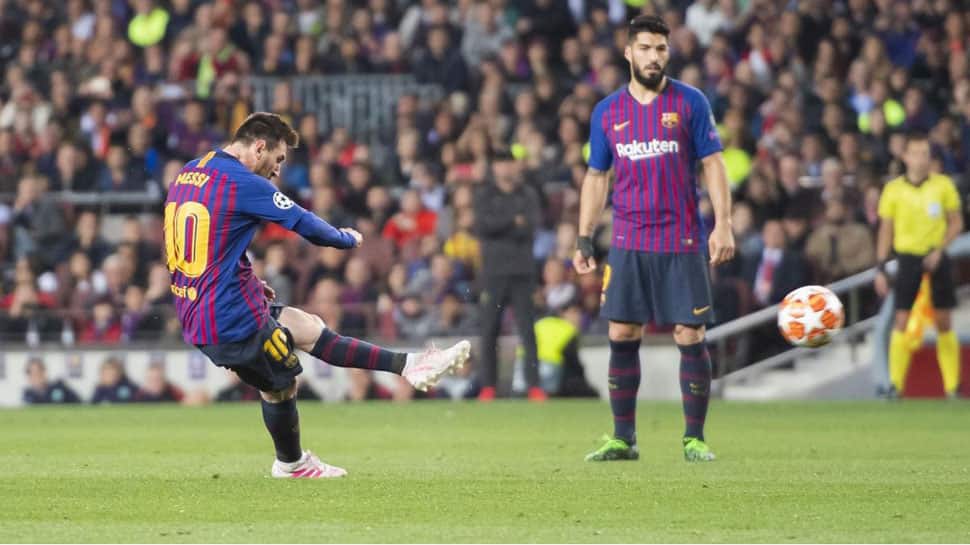 After Lionel Messi mapped out Barcelona`s path to the Champions League final with a vintage display in a 3-0 win over Liverpool in Wednesday`s semi-final first leg, few could say he is not delivering on his promise to return his side to European glory.

Messi`s first act as Barcelona captain was to tell the club`s fans at a pre-season friendly in August against Boca Juniors that he and his teammates "will do everything possible so that beautiful and desired cup returns to the Nou Camp".

Barca have not lifted Europe`s biggest prize since 2015 and have had to enviously watch on as Real Madrid have dominated the trophy since then, but Messi`s determination to end their four-year wait has been palpable throughout the campaign.

Liverpool coach Jurgen Klopp said ahead of the semi-final first leg that Messi`s now famous promise to Barca fans "sounded like a threat" and while his side gave a hugely impressive performance at the Nou Camp, they could still not tame Messi.

They had done a pretty good job of keeping Barca`s all-time top scorer quiet until he walked the ball into the net after Luis Suarez had hit the bar, but the Argentine showed his real talent with his awe-inspiring free-kick which made it 3-0.

It was Messi`s 600th goal for Barca and his 12th in this season`s Champions League in nine appearances.

It was the third time he has delivered a world-class performance in a Champions League semi-final first leg and recalled his stunning double in a 2-0 win against Real Madrid in 2011 and a 3-0 victory over Bayern Munich in 2015.

Barca went on to lift the trophy both those seasons and with the Catalans enjoying such a generous lead in the tie and with Ajax Amsterdam or Tottenham Hotspur their likely opponents in the final, few would dare to bet against them winning it again.

Messi`s free-kick strike was so good that it sent English broadcasters and former players Rio Ferdinand and Gary Lineker into a frenzied celebration, even though the goal effectively doomed their home country`s chances of reaching the final.

Klopp could only declare his admiration for Messi.

"In these moments he`s unstoppable. You cannot defend the free kick -- what a strike," said the German.

"I knew before Lionel Messi was a world-class player and now I saw it again I’m not too surprised."

Barca coach Ernesto Valverde joined Klopp in declaring his admiration for the strike but also praised Messi`s desire to win tackles and get to the ball first.

"Leo always surprises you, I didn`t think he would strike the ball to the same side as the goalkeeper. I don`t know how he does it but he always gets it right, I prefer not to think about it," Valverde said.

"He has a very high level of commitment to his club and his teammates. Liverpool are a very powerful team physically so it was vital our players fought for the ball and Leo did it the most. We know if Leo does something everyone else will follow."

Just as with his pre-season speech, Messi led the way, and everything seems in place for him to be reacquainted with "that beautiful and desired cup".