Lionel Messi, La Liga`s top scorer this season, opened his account for 2019 with his 16th goal, giving Barca a 20th-minute lead as he tucked the ball into the net from a tight angle after his initial shot was saved by Getafe keeper David Soria. 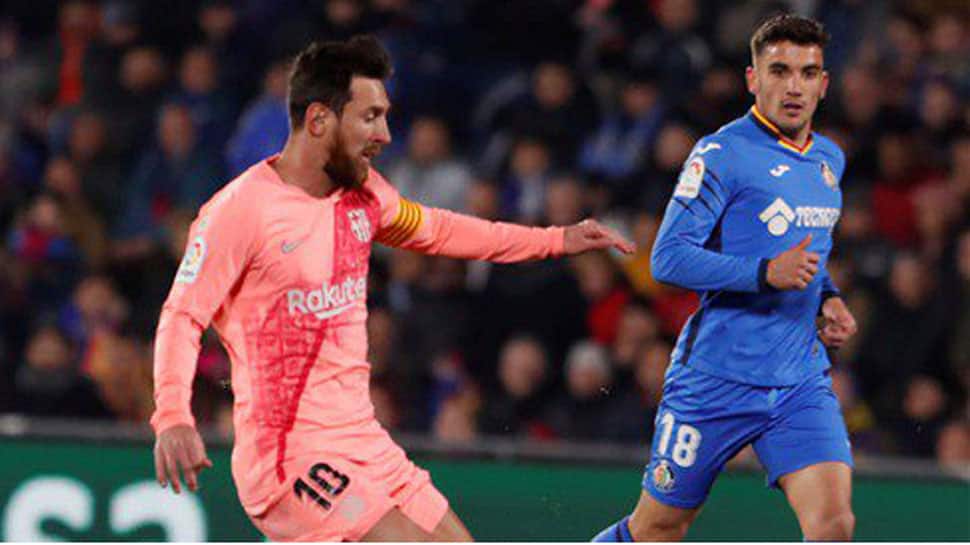 Lionel Messi scored for the seventh time in four La Liga games as champions Barcelona scrapped their way to a hard-fought 2-1 win at Getafe on Sunday that propelled them five points clear at the top of the table.

Messi, La Liga`s top scorer this season, opened his account for 2019 with his 16th goal, giving Barca a 20th-minute lead as he tucked the ball into the net from a tight angle after his initial shot was saved by Getafe keeper David Soria.

It took the Argentine`s career tally to a staggering 399 goals in La Liga before Uruguay striker Luis Suarez doubled Barca`s advantage in the 39th minute with a spectacular volley from outside the area.

Yet Getafe hit back two minutes before the interval with a close-range finish from striker Jaime Mata after a splendid team move and continued to push hard after the break.

Barcelona, who have won seven out of the last 10 La Liga titles, now lead the standings on 40 points after 18 games, stretching the gap to five points over their nearest pursuers Atletico Madrid, who drew 1-1 with third-placed Sevilla.

The Catalans are 10 points ahead of European champions Real Madrid, whose struggles continued with a 2-0 home defeat by Real Sociedad.

"We were aware of those results before going out on the pitch and were under pressure to make the most of the opportunity, and we went out to do that at a very difficult ground," Barca coach Ernesto Valverde told reporters.

"We expected it was going to be a tough game and it was. They got right back into the game with their goal but we are very happy. We`ve increased the gap with our rivals, but there`s still a long way to go."

Getafe`s Mata, who had an earlier first-half strike ruled out at 0-0 for an apparent foul by teammate Angel Rodriguez, missed a big chance in the second half, ballooning the ball over the bar with Barcelona`s goalkeeper Marc-Andre Ter Stegen stranded.

Ter Stegen then made a flying save to keep out a powerful Leandro Cabrera header, while Soria also did well to prevent both Messi, hunting that landmark 400th goal, and French defender Clement Lenglet from stretching Barca`s lead.

"These are the types of games that win you half the title, especially considering the other results before we played," said goalscorer Suarez.

"The other team plays as well, and Getafe are very strong at home so it was very difficult. There were a lot of battles out there but it all stays on the pitch. We`re feeling very positive, the title is in our own hands."