Benzema, who has been playing through the pain of a fractured finger sustained two weeks ago, got the third-placed visitors off to a dream start by pouncing on a rebound and opening the scoring in the fourth minute. 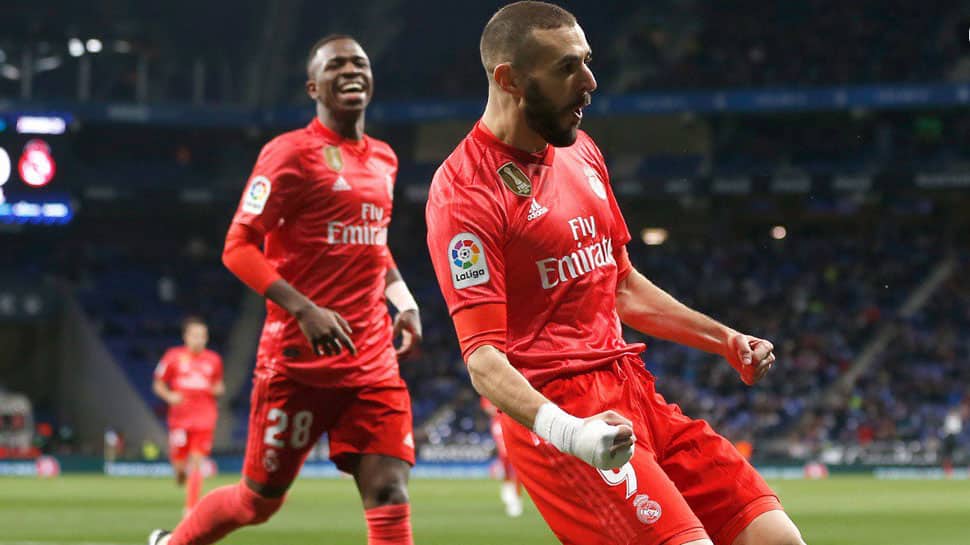 Real Madrid forward Karim Benzema is the type of player who can excite any football fan, coach Santiago Solari said after the often-maligned Frenchman scored twice and inspired his side to a 4-2 win at Espanyol in La Liga on Sunday.

Benzema, who has been playing through the pain of a fractured finger sustained two weeks ago, got the third-placed visitors off to a dream start by pouncing on a rebound and opening the scoring in the fourth minute.

The forward then made it 3-1 to Madrid just before halftime with a magnificent strike, playing a one-two with Vinicius Jr and stroking the ball into the bottom corner, and he played a role in Gareth Bale scoring the European champions` fourth.

"He had a spectacular game, Madrid fans are enjoying watching him and so would any person who likes football," Solari said after a fifth win from six games in all competitions for his side, who are hitting form after a poor start to 2019.

"Karim is such a generous player, he makes his team mates better with his play and with his efforts."

Benzema, 31, is Real`s leading scorer this term with 13 goals though he has not always enjoyed the devotion of the fans due to his inconsistent scoring record, having notched more than 20 in the league in only two of his 10 seasons with the club.

Yet with Madrid`s all-time top scorer Cristiano Ronaldo now at Juventus, and the likes of Gareth Bale and Marco Asensio struggling for consistency and with injuries, Benzema has turned into of one of their most reliable players this year.

"Today he scored twice, but he always puts in complete performances," added Solari, after the win kept third-placed Madrid within five points of local rivals Atletico, although still 10 adrift of leaders Barcelona.

"He is proving that he is the best number nine in the world," he said. "He is scoring goals, working hard and linking up with everyone. It`s wonderful to be able to play with him."

La Liga: Real Madrid get 3rd win in a row with win at Espanyol as Bale returns