Ban on sale of loose cigarettes will help cut smoking in India: Survey

WHO data reveals tobacco use kills more than 7 million people every year and costs households and governments over US$ 1.4 trillion through healthcare expenditure and lost productivity. 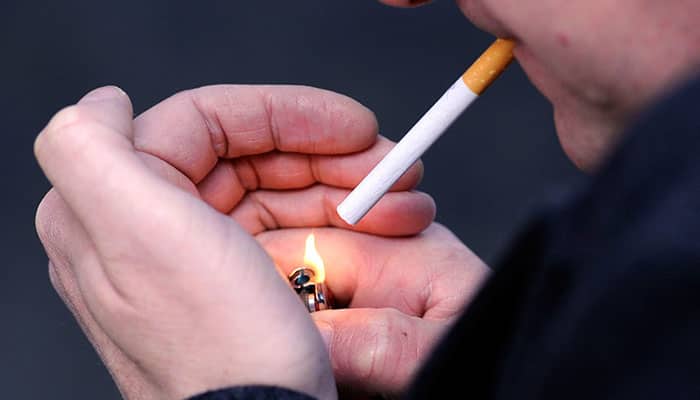 New Delhi: A survey has revealed that nearly 59 per cent of Indians feel that banning the sale of loose cigarettes may help cut down and quit smoking.

Although smoking in public places was restricted nationwide since 2008, there are approximately 120 million smokers in India.

WHO data reveals tobacco use kills more than 7 million people every year and costs households and governments over US$ 1.4 trillion through healthcare expenditure and lost productivity.

About 41 per cent participants in the survey revealed that relieving stress is the major motivation for smoking. But 28 per cent felt that the inspiration behind smoking is "to look cool".

Further, 55 per cent people feel that the freedom to consume tobacco products should be curtailed, as there are many serious health conditions associated with continuous smoking and other forms of tobacco usage.

"Tobacco consumption in any form, be it cigarettes, beedi, ghutka, pan, khaini, sheesha, or even e-cigarettes can have detrimental effects on your health," M Udaya Kumar Maiya, Medical Director, Portea Medical - a Bengaluru-based home healthcare provider, said in a statement on Wednesday.

"While cancer is by far the most prevalent side effect of tobacco consumption globally, diseases such as COPD or chronic obstructive pulmonary disease, Type 2 diabetes, fractures, premature births or still births and arthritis are also caused by tobacco usage," Maiya added.

Selling cigarettes in ones and twos rather than in a whole packet makes it difficult for smokers to quit and enables them to sneak in a cigarette at any point of the day.

Another 68 per cent participants wanted the government to make stringent rules and bring awareness programs to discourage chewable tobacco products - the leading cause of mouth cancer.

It is said that about 69 per cent Indians debunked the role of warning images on cigarette packs.

The findings were based on the "Pulse of the Nation Poll", conducted by Inshorts - a mobile news application, in association with, Ipsos Public Affairs - a global research firm.

Today, the 31st of May, is observed as World No Tobacco Day. Each year, on this day, WHO is highlighting how tobacco threatens the development of nations worldwide, and is calling on governments to implement strong tobacco control measures.