On Monday, Syed Zainul Abedin had also announced that he and his family members "will never eat beef now". 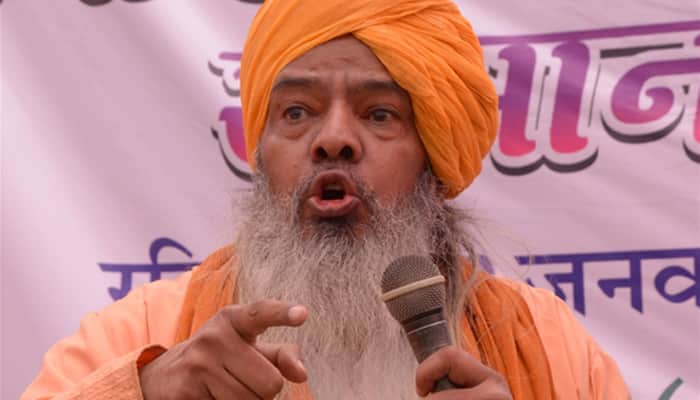 Ajmer: The spiritual head of Ajmer dargah, who had supported a ban on the sale of beef, was on Wednesday "sacked" by his brother.

On Monday, Syed Zainul Abedin had also urged the government to ban the slaughter of all bovine animals to promote communal harmony in the country.

However, his support has not gone down well with his brother who on Wednesday "sacked" him for the "blasphemous" support and declared him a "non-Muslim".

Syed Allauddin Alimi claimed he had the support of the family in sacking Abedin and anointing himself as the new "deewan", spiritual chief, of the Khwaja Moinuddin Chisti mausoleum in Ajmer -- one of the most famous Muslim shrines visited by millions of devotees from across the sub-continent every year.

However, his brother Allauddin Alimi's claim has not been recognised by the dargah committee.

Abedin said Alimi's move has no legal sanctity as per the Durgah Khawaja Saheb Act, 1955 and he will seek a legal opinion on the matter.

The post is hereditary and belongs to heirs of the 12th-13th-century Sufi priest. Deewan has no control over the management of the shrine but gets a monthly remuneration from the management committee, which is appointed by the government.

"I am the new deewan. I have the support of the entire (Chishti) clan," Alimi told news agency IANS, alleging that Abedin was an "apostate because he had spoken in violation of the Islamic law".

"I am not interested in salary. He (Abedin) can have the money. Buy I won`t allow him to enter the shrine now. Whatever he has said is blasphemous."

When Abedin was performing some rituals at the sanctum sanctorum in the dargah last evening, Alimi occupied the 'Gaddi' of Deewan at Khanqah in the dargah premises and declared himself as the new Deewan or Sajjadanashin.

Khanqah is the holy place where the saint used to sit and preach. It is now the place where the Sajjadanashin, a descendant of the Saint, sits during religious ceremonies.

"After I read my brother's statement in newspapers, I discussed with some Muftis who verbally told me that he has now become a non-Muslim due to his statement against the Quran. Thus, he has no right and authority to remain the Sajjadanashin."

"I then called an urgent meeting of the family and went to the Khanqah and declared myself as the new Sajjadanashin on the seat of the Deewan," Alimi said.

Abedin, however, said, "My younger brother has no right to declare himself as the Sajjadanashin. He is neither empowered nor eligible for this act which is totally illegal and illegitimate and I'm seeking a legal opinion for taking action against him."

CEO of the government-appointed Dargah committee, MA Khan, said Abedin continues to be the Sajjadanashin as per the provisions of the Durgah Khawaja Saheb Act, 1955.

"This is a dispute between two brothers and the Sajjadanashin cannot be sacked or removed by such a move," the CEO, who recently took charge, said.

Chairman of the Dargah committee Sheikh Alim said as per the provisions of the Act when the post falls vacant, the dargah committee notifies the vacancy after approval of the Governor and the new Sajjadanashin is appointed with his permission.

Muzaffar Bharti, the head of the hereditary staff who conduct the religious ceremonies of the Sajjadanashin in the dargah, said Alimi's claim does not hold water and he has no moral authority to take over the post.

"Abedin performed Kul ki Rasm at the sanctum sanatorium followed by Dastarbandi (turban tying) at the Khanqah last evening. He is the Deewan of the Dargah as per the law at present and he cannot be sacked in this manner," Bharti said.

Wahid Chisty, the secretary of Anjuman Committee (body of Khadims or clerics), also supported Khan, saying the legal procedure cannot be mocked by anyone in such a manner.

Abedin had been the deewan of the shrine since after the Supreme Court 1987 order, ruling him as the most direct and eldest descendant of the Sufi priest.

He sparked a controversy on Monday by asking Muslims in India to stay away from the slaughter of "bovine animals" and to stop consuming beef for communal harmony in the country.

He read his message during the 805th annual function at the shrine that was also attended by religious heads of various shrines from different parts of the country.

Abedin also announced that he and his family members "will never eat beef now".

"The government should widely impose a ban on slaughtering of all bovine animals and sale of beef. This is one of the prominent reasons for communal hatred in India. Muslims should become an example by taking a resolution to not consume beef in the interest of communal harmony in the country," he had said.

He had also welcomed the Gujarat government's move to enact a law with the provision of life sentence for those found guilty of cow slaughter, saying that the central government should declare cow as the national animal if the government wants to protect it.

"Cow is the symbol of religious belief. Not only the government, but it is also the duty of every follower of the religion to protect them," he had said.

On the practice of 'triple talaq', he had said that it is not only irrelevant today but against the sentiments of the Quran.

He said that while practising justified divorce, the side of the woman should be considered equally and detailed dialogue with her should also take place.