The bill seeks to amend the Citizenship Act 1955 to grant Indian citizenship to people from minority communities from Afghanistan, Bangladesh and Pakistan after six years of residence in India instead of 12 even if they don't possess any proper document. 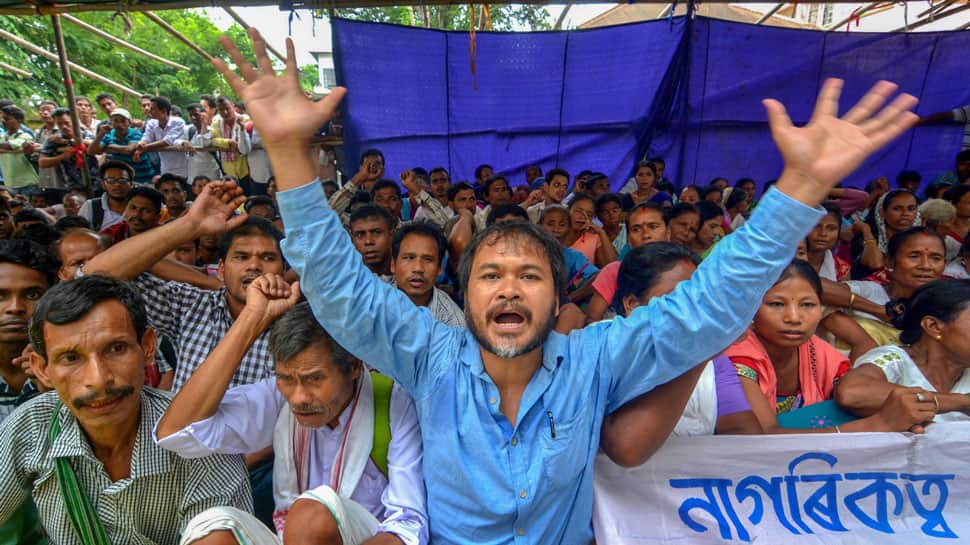 Guwahati: A number of students' organisation and political parties have called an 11-hour northeast 'bandh' on Tuesday to protest the Citizenship Amendment Bill which seeks to provide Indian citizenship to non-Muslims from Bangladesh, Pakistan and Afghanistan.

Several students' bodies of the region have decided to observe the 5 am to 4 pm 'bandh' in support of the call given by the North East Students' Organisation (NESO), an umbrella organisation of students' unions, of which the AASU is a constituent.

The All Assam Students' Union (AASU) has called for a state-wide bandh after a gap of 10 years and it is supported by the Asom Gana Parishad (AGP), which withdrew support to the BJP-led government in Assam during the day, the opposition Congress, the AIUDF, and the Krishak Mukti Sangram Samiti (KMSS).

The bill seeks to amend the Citizenship Act 1955 to grant Indian citizenship to people from minority communities -- Hindus, Sikhs, Buddhists, Jains, Parsis and Christians -- from Afghanistan, Bangladesh and Pakistan after six years of residence in India instead of 12 even if they don't possess any proper document.

The AGP and other groups in Assam have said that the provisions of the bill will nullify the 1985 Assam Accord, which provides for deportation of all illegal migrants, irrespective of religion, who had entered the state after March, 1971.

"This is a crisis for the Assamese society, and all indigenous communities of the region in general. We will not allow the government to pass the Bill at any cost," AASU General Secretary Lurinjyoti Gogoi told PTI in Guwahati.

The movement needs to be taken to all interior places across Assam and the northeast so that the BJP does not pass the Bill, he said.

Assam Director General of Police Kuladhar Saikia said, "District SPs have been instructed to ensure public peace. Appropriate forces have been deployed across the state to prevent any untoward incidents. Patrolling has also been intensified at all places."

From other parts of the region, the Mizo Zirlai Pawal (MZP), the All Arunachal Pradesh Students' Union (AAPSU), the Naga Students' Federation (NSF) and other bodies have extended their support to the 11-hour bandh called by the NESO.

The "bandh" has also been called to condemn Prime Minister Narendra Modi's recent statement that the Citizenship (Amendment) Bill, 2016 would be passed in Parliament soon, a NESO leader said.

"Despite staging various dharnas even in New Delhi by students' bodies from the northeast, the Centre is hell bent on passing the controversial bill, undermining the sentiments of the indigenous people of the region," NESO coordinator Pritambai Sonam told reporters at Itanagar.

According to a report from, the Capital of Mizoram, MZP general secretary Lalnunmawia Pautu said the people of the region were against the proposed amendment as it would grant citizenship to people on religious grounds.

In Mizoram, it would mean legalising thousands of Buddhist Chakmas who had illegally entered the state from Bangladesh, Pautu said.

"If the bill is passed, we will be left with no option but to take up arms to protect our indigenous population," AAPSU president Hawa Bagang said in Arunachal Pradesh capital Itanagar.

The Twipra Student's Federation, the student wing of the Indigenous People's Front of Tripura (IPFT), an ally of ruling BJP in the state, said in Agartala that it is supporting the bandh.

In Shillong, a conglomeration of 14 pressure groups and social organisations of Meghalaya extended its support to the "bandh" called by the NESO.

The Confederation of Hynniewtrep Social Organisation (CoHSO) also demanded that Meghalaya Chief Minister Conrad K Sangma snap ties with the BJP protest against the Centre's move to pass the bill.