The Barabanki accident that took place on Wednesay (July 28) early morning has led to the death of at least 18 people, while more than 25 are injured 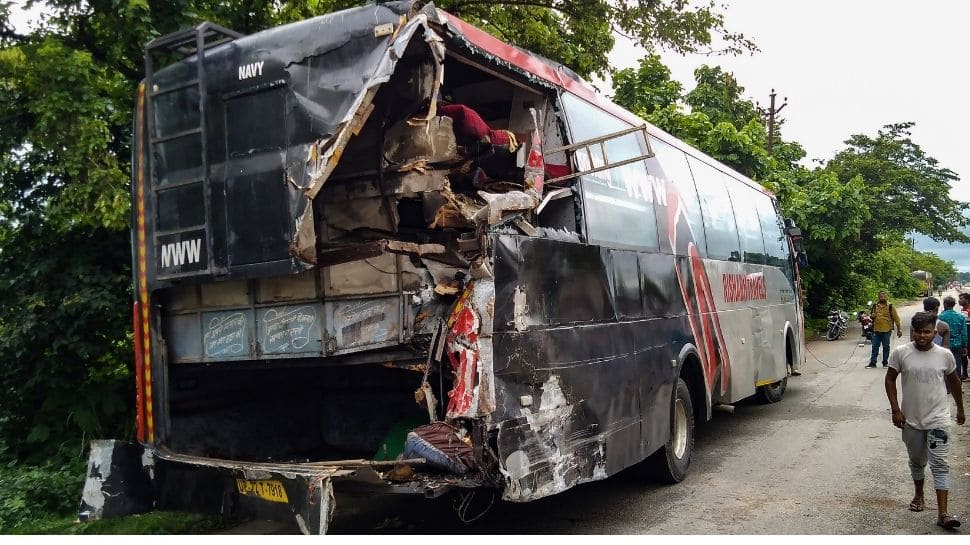 The bus which was hit by a speeding truck on Lucknow-Ayodhya road, in Barabanki (Pic courtesy: PTI)
Share:
Written By:

Barabanki (UP): The Barabanki accident on Wednesay early morning, which saw the death of at least 18 people when a speeding truck hit a broken down bus parked at roadside, has sent shock waves across the nation. Politicians joined others to express their condolence at the loss of lives. The accident also left over 25 injured.

"Deeply saddened by the news of road accident in Barabanki, UP. My condolences to the bereaved families. I have also spoken to CM Yogi ji. Arrangements are being made for proper treatment of all the injured comrades," said Prime Minister Narendra Modi in a tweet in Hindi.

The PMO handled also tweeted about help extended to those affected.

PM @narendramodi announced an ex-gratia of Rs. 2 lakh each from PMNRF for the next of kin of those who lost their lives in the tragic accident in Barabanki. The injured would be given Rs. 50,000 each.

President Ram Nath Kovind condoled the deaths and wished for speedy recovery of the injured.
"Deeply pained by the news of the untimely death of many people in a road accident in Barabanki, Uttar Pradesh. In this hour of grief, I express my deepest condolences to the bereaved families and wish the injured a speedy recovery," he said in a tweet.

Chief Minister Yogi Adityanath has expressed grief over the loss of lives in the accident and directed officials to extend all possible help to the victims.

The double-decker bus, which was hit at the National Highway 28, was parked at the roadside following a breakdown, as per media reports. The bus was travelling from Ambala to Bihar and was ferrying nearly 140 labourers, most of who were asleep when the accident took place.