Beleaguered Karnataka Chief Minister HD Kumaraswamy lost the trust vote in the Assembly by 6 votes held after a four-day long marathon debate on the confidence motion he moved on July 18. 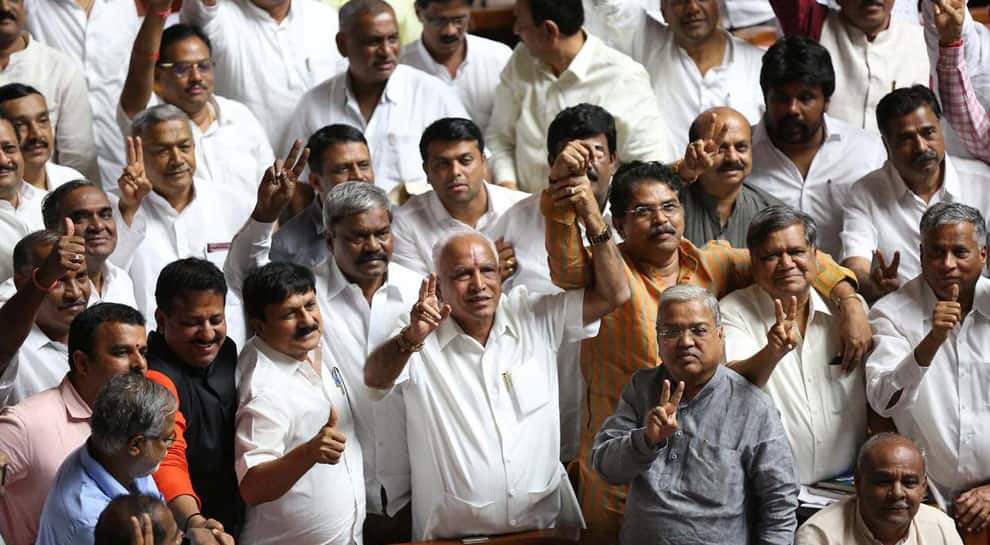 In a crucial victory for the Bharatiya Janata Party (BJP) in Karnataka, the state will soon see the lotus bloom again as the 14-month-old Congress-Janata Dal Secular coalition government on Tuesday fell after losing the confidence motion in the Assembly. Beleaguered Karnataka Chief Minister HD Kumaraswamy lost the trust vote in the Assembly by 6 votes held after a four-day long marathon debate on the confidence motion he moved on July 18.

Out of the 225 MLAs in Karnataka Assembly, 20 were absent for the floor test, reducing the House strength to 205 with 103 as the halfway mark for a simple majority. The confidence motion moved by Kumaraswamy got 99 votes as against 105 of the opposition leading to its defeat.

The 12-day political drama was triggered by the resignations of over a dozen rebel MLAs belonging to the coalition who submitted their papers at the Speaker's office and left for Mumbai where they were holed up in a hotel.

The BJP will stake claim to form the government in the state on Wednesday after meeting Governor Vajubhai Vala, said state BJP leader R Ashoka. State BJP president BS Yeddyurappa is likely to be the next CM of the state. This will be the fourth time when he becomes the CM. His stint as the CM in 2018 after the May Assembly election was for less than a week as he failed to garner majority.

Reacting after the trust vote, Yeddyurappa expressed happiness calling it a victory of democracy and assured the people of a new era of development.

"It's the victory of democracy. People were fed up with the HDK govt. I want to assure the people of Karnataka that a new era of development will start now onwards. Farmers suffering due to drought and other factors, we assure the farmers, we will give them more importance to live happily and take appropriate decisions as early as possible," said Yeddyurappa.

BJP leader Madhuswamy said for 14 months, the people were upset that the BJP was not in power. "We saw this in BJP's victory in the Lok Sabha poll. No matter what happens, this is good for the state. Would like to thank 105 MLAs for their support, without any complaints at any time. They have been patient and we have won the appreciation of the people. We will keep their faith alive once we officially take an oath."

Another leader Muralidhar Rao said, "We will discuss with central leadership and our party president and articulate our position. We will take stock of the situation. I will talk to my National President soon."

The BJP supporters celebrated at the party`s state office in Bengaluru after the coalition government lost the trust vote. Governor Vala accepted the resignation of Kumaraswamy as the chief minister and asked him to continue as the caretaker CM till alternative arrangements were made.