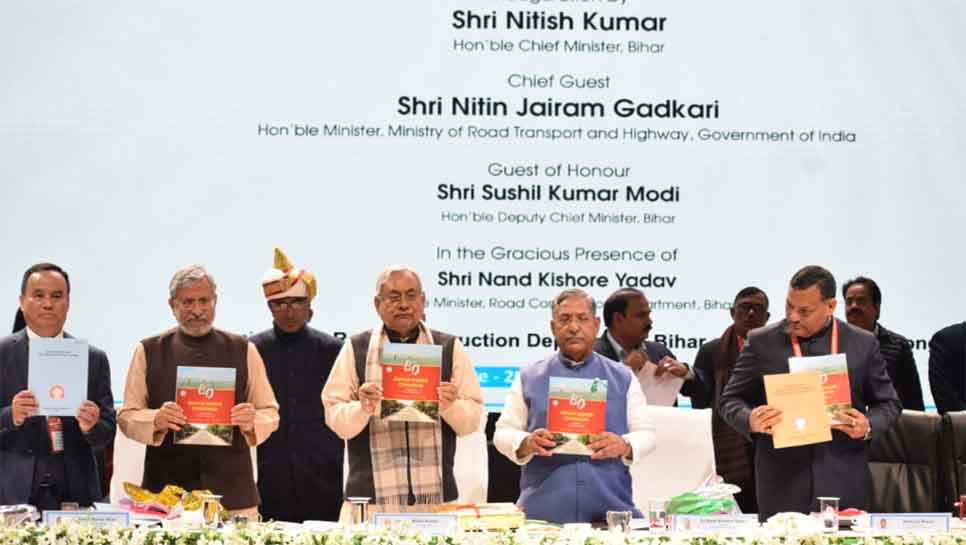 The programme was inaugurated with the ceremonial lighting of the lamp. Souvenir for the session was released on the occasion.

CM Shri Nitish Kumar said, “Maintenance of roads is equally important as the construction of roads for higher durability. For road and construction, our state focuses on three principles which include maintaining high quality, completion of work on time and regular maintenance after construction. Technology for construction should be environment-friendly.”

He also said, “Jal-Jeevan-Haryali campaign launched in Bihar focuses on increasing green cover in the next three years. Following the pattern of other countries, plantation of trees on side-lanes of roads should be done.”

“Road safety is another major issue which needs to be addressed. Though accidents have reduced in Bihar after implementation of a total prohibition on alcohol. However, it is necessary to spread awareness regarding traffic rules among drivers especially for heavy vehicles”, he added.

CM raised an issue of allocation and distribution of Central Road Fund that is collected as CESS from petroleum products because a large sum accumulated a decade ago was not granted to Bihar for utilization.

“Last IRC in Patna was hosted in Gandhi Maidan in 2009 while this year it is being organized in Samrat Ashok Convention Kendra which is equipped with world-class modern facilities.  It shows infrastructural development of Bihar in past 10 years. Roads should be constructed in an environment-friendly manner. Bihar government has made a decision for not felling trees for constructing roads. The trees can be either integrated with project design or translocation of trees from road alignment”, he added.

Shri Nitin Gadkari, Minister for Road Transport & Highways of India, sent a video message for this 80th annual session of IRC. In a video message, he said, “I would like to thank hundreds of engineers, officials and labours working day and night for building outstanding infrastructure all over India. It is not my individual achievement but it is the collective achievement of the entire team. We need to adopt new technology, design and successful practices which are cost-effective and eco-friendly.”

RCD minister Shri Nand Kishore Yadav said, “Any state cannot progress without roads. 10 years back CM Shri Nitish Kumar set a goal to construct roads so that people from the remotest area of Bihar can reach the capital city within 6 hours. Then the state had only four bridges. I am happy to share that RCD has achieved this goal. Our department has also formulated ‘Road Maintenance Policy’ for regular maintenance and repair of roads which has helped in the longevity of the roads.”

I K Pandey, DG& special secretary MoRTH, said, “We would strive to construct roads following eco- friendly measures, using local raw material giving employment to local people. We have started using waste plastic in the construction of roads.   In the last 3 months, 51 km long road has been constructed using waste plastics which will help to recycle non-biodegradable waste and also help in increase the durability of a constructed structure.”

On Friday, six sittings on the technical session were held. 16 presentations by contractors, consultant and papers published in IRC journal were made.