Congress continues to harp on the charge that democracy is under a massive threat in states like Karnataka and Goa. 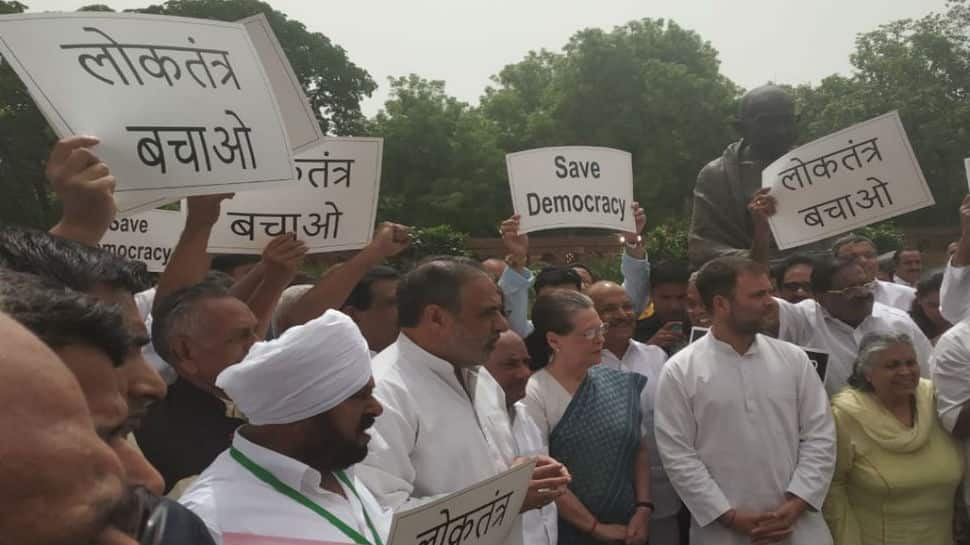 Facing an existential crisis in Karnataka and confined to the sidelines in Goa, Congress on Thursday staged a protest outside Parliament and alleged that democracy is under a big threat.

Several top leaders of Congress, including Sonia and Rahul Gandhi, participated in the protest near the Gandhi statue outside Parliament. Carrying ' Save Democracy' placards, the leaders alleged that underhand tactics are being used in both Karnataka as well as Goa to sway MLAs away. Congress had already pointed the accusatory finger at the Bharatiya Janata Party for allegedly indulging in horse-trading in Karnataka, only to be rebuked by defence minister Rajnath Singh in Lok Sabha.

The rebuke has hardly been a deterrent for Congress which has had to face massive electoral defeats in recent years. Even in a state like Karnataka where it somehow managed to combine forces with Janata Dal Secular to form a shaky government, Congress has been unable to be in control. Many of its MLAs - as well as MLAs from JDS - here have resigned, threatening the future of the HD Kumaraswamy-led state government. And despite massive efforts to win them back, not much has worked.

The tale is not much different in Goa where 10 of its MLAs had quit and joined BJP, the party in power in the state.

Political analysts, as well as critics, largely agree that Congress is rather leader-less and Rahul's decision to resign - yet to be accepted by Congress Working Committee - shows he has been unable to galvanise the party.