The defence and paramilitary forces also took part in the event with enthusiasm. 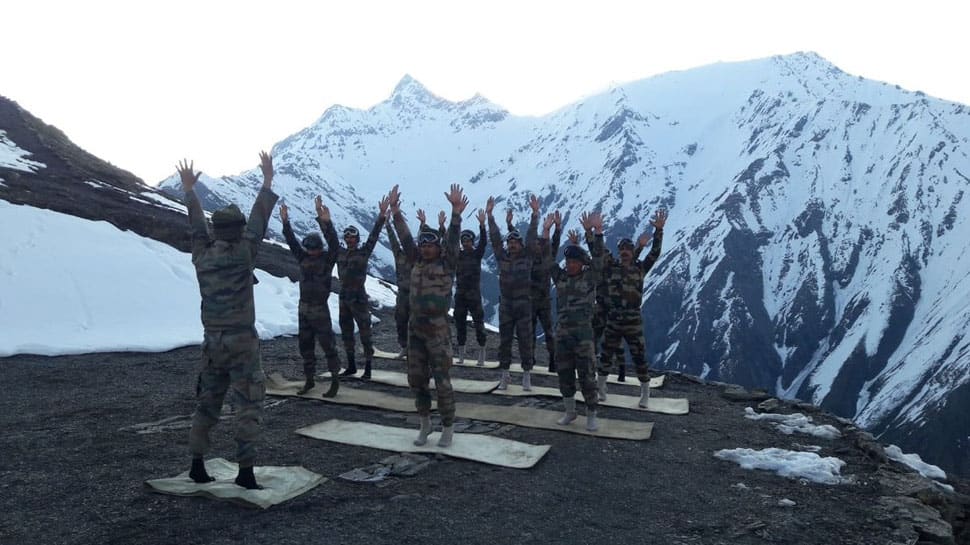 The fifth International Yoga Day is being celebrated all over the nation with zest and fervour. People from all walks of life came together on Friday morning to practice yoga across the nation. The defence and paramilitary forces also took part in the event with enthusiasm.

The Indian Army performed yoga at the Line of Control (LoC) in Jammu and Kashmir. Taking to the social media platform, Instagram, it posted pictures of practising yoga. "Every day is Yoga Day. Our fit & fearless soldiers practise Meditation Yoga to remain physically fit and mentally robust even on operational areas on Line of Control," read the post.

Troops of Assam Rifles, CRPF, Police and civilians performed yoga at the Indo-Myanmar border despite bad weather and rain. The Indian Army personnel deputed at several posts in the Himalayas also performed yoga.

The air warriors of the Indian Air Force (IAF) also enthusiastically participated at the event celebrated in the Headquarters Maintenance Command. Airwarriors and their families also performed yoga at the Air force Station in the national capital. Taking to Instagram, the IAF put up a post saying, "Life of an Air-warrior is thrilling, exciting, sometimes tough but always exhilarating. Regular practice of YOGA provides multiple rewards to the practitioner. Air-warriors join #IDY2019 to be a part of fit India."

Calling yoga a routine, the IAF said, "The Air-warriors practise Yoga before days activities. Yoga has immense benefits & the air-warriors do it as a routine."

The Western Naval Command has celebrated the event, onboard Viraat, the decommissioned aircraft carrier that was once the flagship of the Indian Navy. Traditionally, Western Naval Command (WNC) has always encouraged its Officers and men to pursue and excel in sports, adventure and physical fitness. The WNC has adopted the philosophy of Yoga - From Fitness to Wellness - to achieve synergy of mind, body, emotions and energy towards a healthy and happy living.

The Indo-Tibetan Border Police (ITBP) troops on the occasion performed yoga in some of the most difficult terrains in the country. The ITBP troops of the ATS Lohitpur, where the sun rises first in this eastern most tip of Arunachal Pradesh, commemorated this day before the break of dawn. Both men and women personnel performed yoga at 14,000 ft near Rohtang Pass on a snow-covered slope at minus 10 degree temperatures.

Prime Minister Narendra Modi led the celebrations from Jharkhand's capital Ranchi. He performed Yoga with around 40,000 enthusiasts at the Prabhat Tara ground and said everybody should practice the ancient Indian discipline lifelong. The Jharkhand capital has been selected as the venue for the main event for the 5th International Day of Yoga. Events to mark the day are being held across the country and several of them are being led by Union ministers, including Amit Shah and Rajnath Singh. PM Modi also said the government has been working to make Yoga a pillar of preventive healthcare.