The official Twitter handle of Maharashtra CM confirmed today that at least Rs 5,380 crore has been released from Maharashtra Contingency Fund for the relief to unseasonal rain-affected farmers. 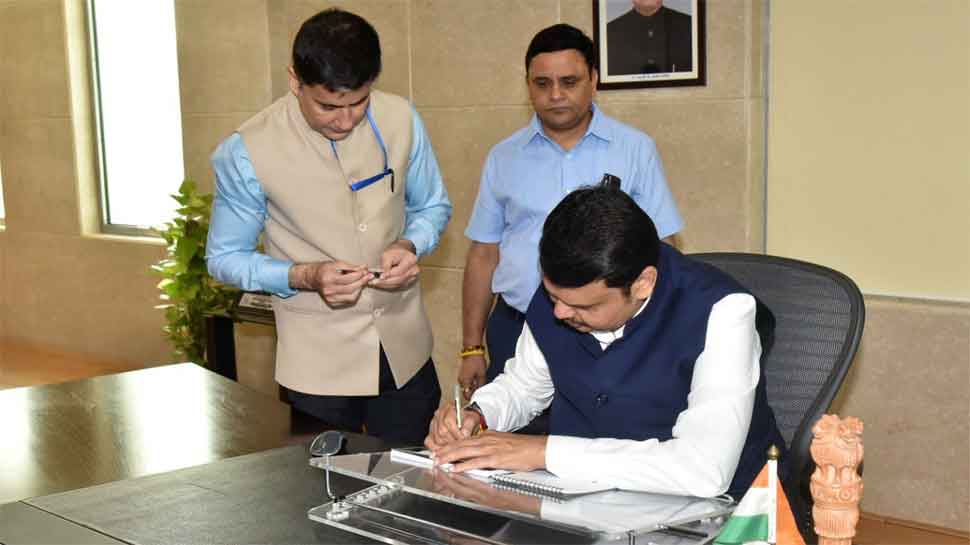 MUMBAI: Just after swearing-in as the Chief Minister of Maharashtra for a second term, Devendra Fadnavis on Monday got down to work and sanctioned Rs 5,380 crore as relief for farmers affected by unseasonal rains.

Earlier in the day, CMO Maharashtra had informed that the first thing Fadnavis did after returning to the Mantralaya, the state secretariat building in south Mumbai, was to put down his signature on a cheque for the Chief Minister's Relief Fund. The newly-appointed Chief Minister was seen handing over the cheque to a woman in the pictures tweeted by the CMO Maharashtra.

"CM Devendra Fadnavis' first signature of this tenure was done on a #CMReliefFund cheque, on reaching Mantralaya, which was handed over to Kusum Vengurlekar by CM," the Chief Minister's Office tweeted.

CM Devendra Fadnavis’ first signature of this tenure was done on a #CMReliefFund cheque, on reaching Mantralaya, which was handed over to Kusum Vengurlekar by CM. pic.twitter.com/x43LtP6cbG

Earlier in November, shortly after the results of Maharashtra assembly elections were declared, Chief Minister Devendra Fadnavis had approved Rs. 10,000 crore as a special provision to provide immediate assistance to farmers affected by unseasonal rains. The chief minister had directed the officials concerned to review the ground situation in their respective areas and finalise the details of the assistance to be provided.

"It was also decided to provide help to farmers through insurance companies. The government is in touch with insurance companies. The process of conducting ''panchnamas'' (on-the-spot assessment of crops) is being expedited and mobile photographs have been permitted. We will approach the Centre for help. But, in the meantime the state government will disburse funds from its treasury without waiting for the Central assistance," the chief minister had said.

On Monday, the BJP government in Maharashtra got a 24-hour breather after the Supreme Court reserved its judgement on the Shiv Sena, Congress and the NCP's demand seeking an urgent floor test.

The Centre had told a bench comprising Justices N V Ramana, Ashok Bhushan and Sanjiv Khanna that the governor had in absolute discretion invited the largest party to form government on November 23. It further said that the BJP had the support of all 54 NCP MLAs to form a government in Maharashtra.

The BJP is the single largest party with 105 MLAs in the 288-member state assembly followed by the Shiv Sena (56), NCP (54) and Congress (44). The Sena broke its three-decade-long ties with the BJP after the latter declined to share the chief minister’s post.