Zee News Editor-in-Chief Sudhir Chaudhary analysed how Indian products made a comeback to the markets this Diwali and China ended up incurring heavy losses. 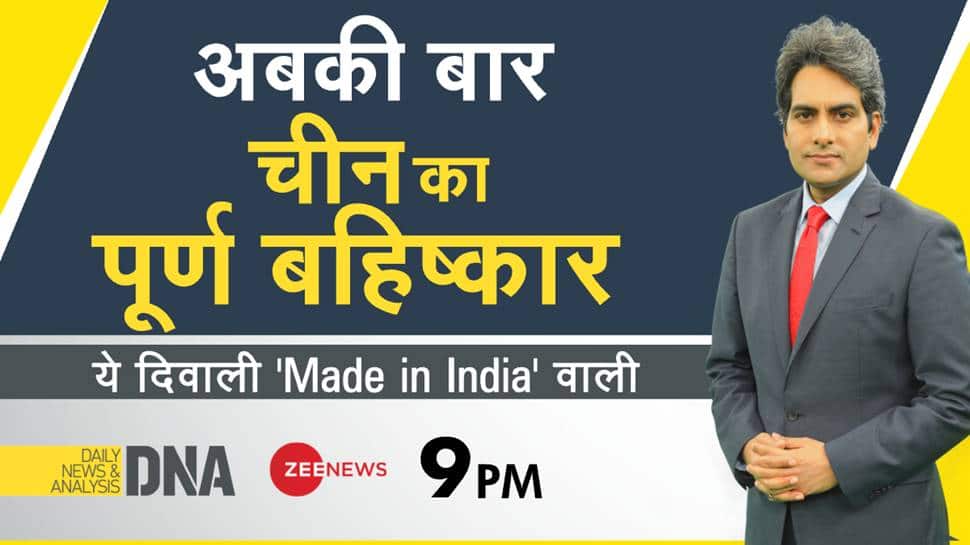 New Delhi: On the occasion of Diwali, apart from fuel prices dropping there is another happy news that there has been a massive dip in sale of Chinese goods in India. This means that on Diwali this year, people did not buy China-made products and preferred India made items including idols of Lakshmi-Ganesh. It has been estimated that Beijing has incurred losses upto Rs 50,000 crores.

The Confederation of All India Traders (CAIT) claimed that the sale of Made in China goods in India for Diwali this year has been much less due to which China has suffered a loss of Rs 50,000 crores in 2021. Also, the trade organization estimates that this time people in India spent Rs 2 lakh crore on Diwali shopping.

On Wednesday's episode of DNA, Zee News Editor-in-Chief Sudhir Chaudhary analysed how Indian products made a comeback to the markets this Diwali and China ended up incurring heavy losses.

The stance taken to boycott Chinese goods is bearing fruits and its effects can be seen since the last five months. For example, this year on Rakhi, China incurred losses of Rs 5,000 crore because people only bought made in India rakhis. Similarly, on the occasion of Ganesh Chaturthi, idols made in China did not get many buyers. Due to this, there was a loss of about Rs 500 crores to China. And on Diwali too, people are buying more made in India goods.

Notably, post the Galwan valley bloody skirmish in which several Indian soldiers were killed, Zee News had appealed to people to boycott Chinese goods. At that time, about 20 million people had taken a vow that they would not buy made in China goods and its effect can be seen.

Last year on June 30, Zee News had started a campaign called Made in India, with the aim to give a befitting reply to Made in China goods in the country. At that time, about two crore people had expressed their support in favor of Made in India campaign by giving a missed call displayed by Zee News on the channels. It was probably the largest digital referendum in the world at that time.

Zee News is happy to note that the campaign started last year was not limited to just one TV programme, rather, this campaign laid such a foundation for a social change, which has rattled China.