As widening cracks in their ongoing agitation against the three farm laws after the violence during Tuesday’s tractor parade, farmer unions have now cancelled their planned march to Parliament on February 1 when the Union Budget 2021-22 would be presented. They, however, said on Wednesday that their agitation against the farm laws will continue and public meetings and hunger strikes will be held across the country on January 30 on Mahatma Gandhi's death anniversary to emphasise on peace and non-violence. 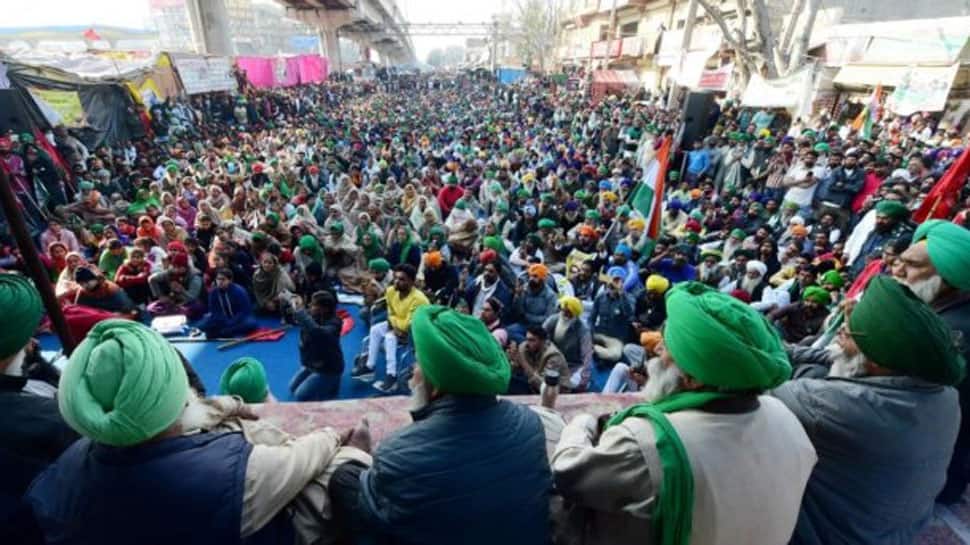 New Delhi: As widening cracks in their ongoing agitation against the three farm laws after the violence during Tuesday’s tractor parade, farmer unions have now cancelled their planned march to Parliament on February 1 when the Union Budget 2021-22 would be presented.

They, however, said on Wednesday that their agitation against the farm laws will continue and public meetings and hunger strikes will be held across the country on January 30 on Mahatma Gandhi's death anniversary to emphasise on peace and non-violence.

The decision by farmer unions came a day after massive violence during their tractor rally in the national capital that left nearly 400 police personnel injured, as the protesters deviated from the routes, clashed with the cops and laid siege to the Red Fort.

The farmer leaders, however, alleged that there was a conspiracy behind Tuesday's incidents and demanded a probe.

"The tractor parade was hit by a government conspiracy. Deep Sidhu is an RSS man. Police let him go after he hoisted a religious flag at Red Fort," farmer leader Darshan Pal, who has been accused by the police of making inflammatory speeches, alleged at a press conference.

Sidhu is a former aide of actor and BJP MP Sunny Deol. Deol had distanced himself from Sidhu in December after he supported the farmers' agitation.

"We have cancelled our plan for a march to Parliament on budget day on February 1. But our agitation will continue and there will be public meetings and hunger strikes across the country on January 30, " Pal said.

Another farmer leader Balbir Singh Rajewal claimed that over two lakh tractors and lakhs of people participated in Tuesday's parade and "99.9 percent of the protesters were peaceful".

Even as the farmer unions continued to allege that "anti-social" elements had perpetrated the violence to "torpedo" their peaceful agitation against the farm laws, Tuesday's incidents that have been widely condemned started taking a toll with Bharatiya Kisan Union (Bhanu) and All India Kisan Sangharsh Coordination Committee withdrawing from the protests on the Delhi's borders.

Swaraj India leader Yogendra Yadav, who has been supporting the farmers' agitation, said, "We regret the Red Fort incident and accept its moral responsibility. The incident should be probed. There is a conspiracy behind it."

Responding to a question on farmer leaders being named in FIR, Yadav said, "FIR, jail and torture are rewards of movements". "We have video clippings and we will expose how a conspiracy was hatched to defame our movement," Shivkumar Kakka said.

As many as 37 farmer leaders, including Rakesh Tikait, Yogendra Yadav, Darshan Pal, Medha Patkar and Gurnam Singh Chaduni, have been named in an FIR in connection with the violence during the tractor parade.

Wielding sticks and clubs and holding the tricolour and union flags, tens of thousands of farmers atop tractors broke barriers, clashed with police and entered the city from various points to lay siege to the Red Fort on the Republic Day.

Farmers, mostly from Punjab, Haryana and western Uttar Pradesh, have been camping at several Delhi border points, including Tikri, Singhu and Ghazipur, since November 28, demanding a complete repeal of three farm laws and a legal guarantee on minimum support price for their crops.

"The conspiracy to defame a peaceful movement of the last seven months is now exposed in front of the public. Along with some individuals and organizations, like Deep Sidhu and Kisan Majdoor Sangarsh Committee led by S Satnam Singh Pannu, the government made this movement violent. We clarify again that we dissociate ourselves from the violent actions which took place at Red Fort and other parts of Delhi," Pal said at the press conference.

He alleged that the incident was "orchestrated". "The parade of the farmers was predominantly peaceful and on the agreed-upon route. We strongly condemn the insult to national symbols, but the farmers' movement cannot be painted as 'violent' as violence was done by a few anti-social elements, who are not associated with us.

"Farmers from all borders reached their original place (of protest) after peacefully completing their respective parades yesterday itself," he added.

In a major blow to the farmers' protests, two farmer unions on Wednesday withdrew from the ongoing agitation on Delhi's borders against the three farm laws, a day after violence broke out in the national capital on Republic Day during the tractor parade.

Talking to reporters, Bharatiya Kisan Union (Bhanu) president Thakur Bhanu Pratap Singh said he was deeply pained by whatever happened during the tractor parade in the national capital, adding that his union was ending its protest. The union was staging the protest at the Chilla border.

VM Singh of All India Kisan Sangharsh Coordination Committee said that it is withdrawing from the ongoing agitation as they cannot carry forward a protest with someone "whose direction is something else".

In a related development, Delhi Police has named Punjabi actor and singer Deep Sidhu and gangster-turned-social activist Lakha Sidhana in an FIR in connection with the violence at the historic Red Fort. It has registered the case against them at the Kotwali police station of North district. The two have been booked under relevant sections of the IPC, the Prevention of Damage to Public Property Act and other legislations.