The maximum and minimum temperatures were recorded at 21 degree Celsius and 5 degree Celsius, respectively. Rail traffic was badly affected due to thick fog in Delhi. 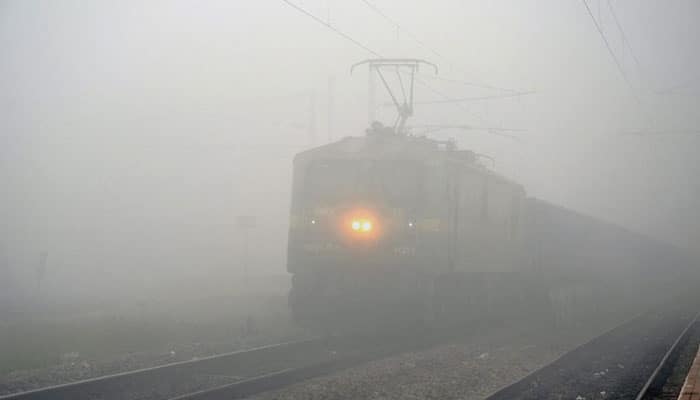 NEW DELHI: A thick blanket of fog covered Delhi and its adjoining areas on Thursday and the temperature remained below normal level, making Thursday morning cold and gloomy for the people living in the national capital.

The maximum and minimum temperatures were recorded at 21 degree Celsius and 5 degree Celsius, respectively. Rail traffic was badly affected due to thick fog in Delhi.

Indian Railways said in a statement that 11 trains were rescheduled after they got delayed for around an hour due to fog. Jayanagar- New Delhi S Sainani Express, Ghazipur-Anand Vihar Express, and Poorvottar Sampark Kranti Express were running late by 1.30-hr, 2 hours and one hour respectively.

The low visibility also affected the movement of Bhubaneswar Duronto Express, which got delayed by five hours while Poorva Express and Puri-New Delhi Purushottam Express were delayed by three hours each.

It is likely that fog and chill would continue in the Delhi and there are hopes for an improvement in the quality of air and visibility in the capital. The air quality in Delhi remained poor on Thursday morning as the Air Quality Index (AQI) at Mathura Road was at 346 in the morning with particulate matter (PM) 2.5.

"The haze and fog will continue to persist during the early morning and late evenings for the next couple of days," the Centre-run System of Air Quality and Weather Forecasting and Research (SAFAR) told ANI.

"Go for a short walk instead of a jog and take more breaks. Stop any activity level if you experience any unusual coughing, chest discomfort, wheezing, breathing difficulty, or fatigue," advised SAFAR."If the room has windows, close them. If the air conditioner provides a fresh air intake option, keep that closed. Avoid burning of wood, candles or incense. Keep the room clean - don`t vacuum. Do wet mopping to reduce dust," the SAFAR advisory further read.