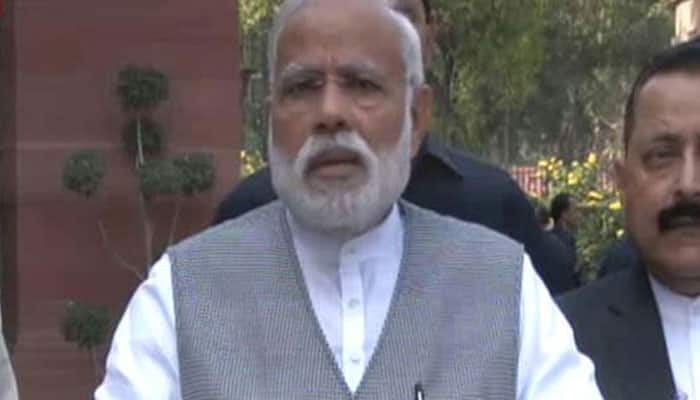 New Delhi: The government is in favour of bringing construction related material in the 5 per cent slab of GST, Prime Minister Narendra Modi said on Tuesday, while informing that changes in the tax structure will continue as there is scope for improvement.

He refused to join issue with Congress President Rahul Gandhi who has been describing GST as "Gabbar Singh Tax" and "Grand Stupid Thought", saying, "jiski jaisi soch, waise uske shabd (the way someone thinks, the same are his words).

"In an interview to ANI, PM Modi underlined that all decisions related to GST (Goods and Services Tax), a single tax regime which was rolled out two years back, have been taken through consensus in the GST Council, which has representation from state governments, including Congress ones."Are they abusing their own party leaders and party governments? ...Just creating a political hue and cry is not good," he said, attacking Gandhi for slamming the GST.

The Prime Minister emphasised that GST is a new system that is bringing about a "big transformation" and is driven technologically.

"So some small traders have faced inconvenience. We acknowledge this. But the government`s responsibility is to be sensitive to their concerns. So, whatever comes to our notice, are referred to the GST Council. We decide collectively how to simplify (GST)," he said.

Talking about providing relief to traders, Modi said the central government wanted the tax liability slab to be raised from Rs 20 lakh to Rs 75 lakh but could not do this in the last GST Council meeting as some states had reservations.

So, the issue has been sent to a Committee which has been formed by the GST Council."Once the Committee reaches a decision, it will benefit a number of people," he said.

Similarly, PM Modi said, his government wanted to bring material used for under construction and fully constructed houses in catch all 5 per cent slab, like has been done in for restaurants.

"But there were reservations by some. So GST Council could not do it. It has now gone to the Committee. We will try to ensure that the committee report is expedited," he added.

"So, continuously, we have been trying to make GST easy and ensure that interests of the consumers are safeguarded. In such a short time, in such a big nation, whatever has been achieved is not small... There is scope for improvement. We will continue to make changes," PM Modi said.

He said zero tax is being levied on 500 items, which at one time incurred high taxes."We keep doing because we take feedback. We believe in discourse," the Prime Minister said.

Before GST, the tax rates in the country were as high as 30-40 per cent with some hidden taxes and double taxes, he said, adding GST has simplified all this.

When referred to criticism of the GST by Gandhi, PM Modi asked whether GST processes have not been implemented through consensus with all political parties in the country.

Since Pranab Mukherjee was the Finance Minister, the GST process has been going on, he pointed out.

"In Parliament, the (GST) Bill was passed unanimously," he said, adding decisions are taken in GST Council where all governments and UTs along with the Centre are represented.

"All have equal position in the GST Council. Puducherry and Government of India are both equal," he said.

2019 Lok Sabha polls will be 'Janta versus Gathbandhan': PM Modi