Have got more from the country than I gave: Pranab Mukherjee on being awarded Bharat Ratna

Pranab Mukherjee served as the country's 13th President from 2012 to 2017 and is widely respected across the political spectrum. 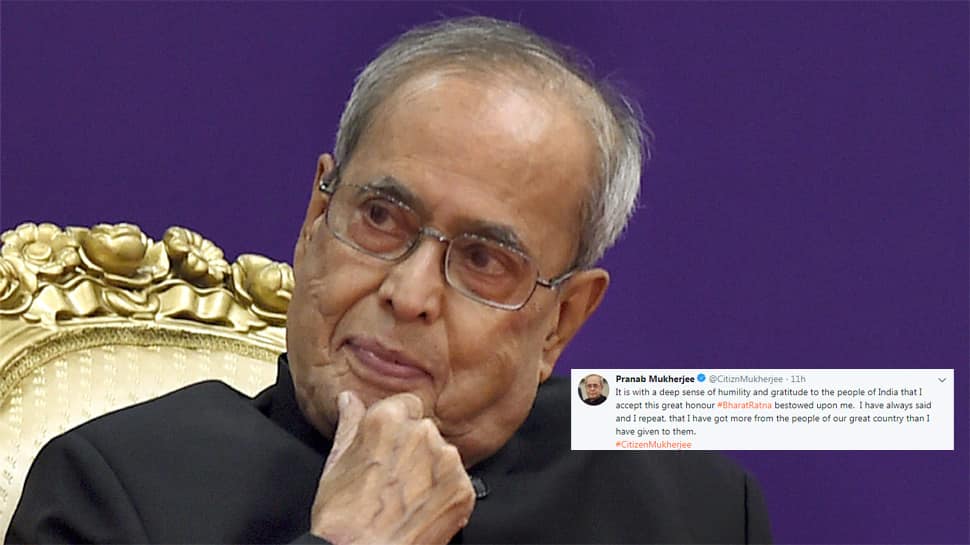 NEW DELHI: Former President Pranab Mukherjee on Friday expressed gratitude after the country's highest honour - Bharat Ratna - was conferred on him. He said that he has always got more from the country than he has given.

"It is with a deep sense of humility and gratitude to the people of India that I accept this great honour #BharatRatna bestowed upon me.  I have always said and I repeat, that I have got more from the people of our great country than I have given to them," the 83-year-old tweeted on Friday.

After the award was announced, Prime Minister Narendra Modi recalled the contributions of the former president. "Pranab Da is an outstanding statesman of our times. He has served the nation selflessly and tirelessly for decades, leaving a strong imprint on the nation's growth trajectory. His wisdom and intellect have few parallels. Delighted that he has been conferred the Bharat Ratna," he tweeted.

Mukherjee served as the country's 13th President from 2012 to 2017 and is widely respected across the political spectrum for his political career spanning over five decades. He has held various key posts in the Congress as well as in the governments led by Indira Gandhi, Rajiv Gandhi, PV Narasimha Rao and Manmohan Singh.

He served as a deputy minister and Minister of State for Finance in 1973-74 and became Finance Minister in 1982.

He was earlier honoured with Padma Vibhusan, India's second highest civilian award, in 2008. He has also been given the Best Parliamentarian Award in 1997 and Best Administrator in India Award in 2011.

I didn't cry when told he is no more, says wife of Ashoka Chakra awardee Lance Naik Nazir Ahmad Wani