The order was passed by Mandal Executive Magistrate at Shadnagar Police Station as the accused could not be produced in fast-track court at Mahabubnagar due to the non-availability of the judge and huge protest by the public outside the police station. 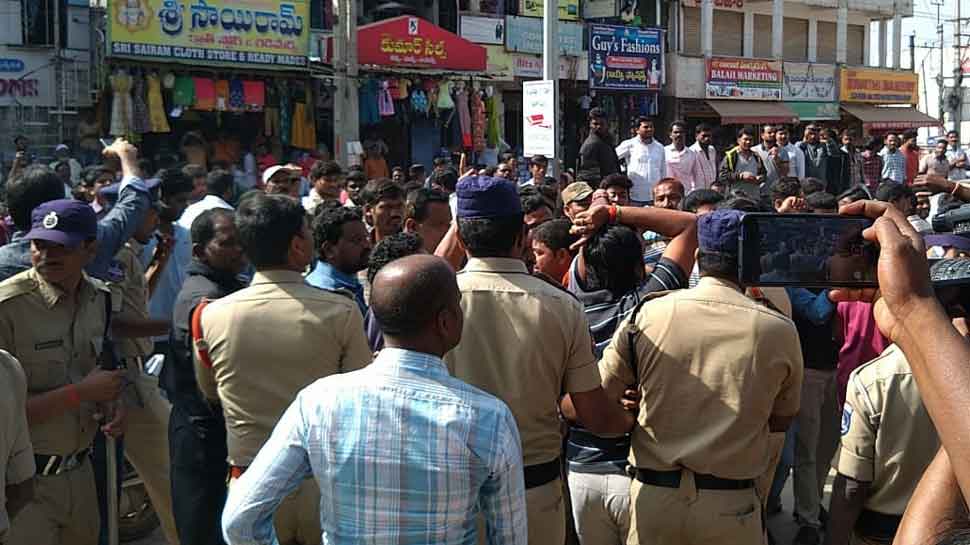 Hyderabad: A local court in Telangana's Shadnagar town sent all four accused in the gruesome gangrape and murder of a young government veterinary doctor to judicial custody for 14 days on Saturday. The order was passed by Mandal Executive Magistrate at Shadnagar Police Station as the accused could not be produced in fast-track court at Mahabubnagar due to the non-availability of the judge and huge protest by the public outside the police station.

All four accused - Mohammed Arif, Chintakunta Chennakeshavulu, Jollu Shiva and Jollu Naveen - were later shifted to Chanchalguda Central Jail. Earlier, three doctors of a government hospital were also brought to the police station as protests by local residents in front of the police station intensified.

After repeated requests by officials failed to pacify the crowd, the police resorted to lathi-charge to disperse the protestors. Even the magistrate was brought to the police station from the back door. Demanding that the accused be publicly hanged, hundreds of citizens staged a protest at the police station since morning.

Raising slogans of "we want justice", hundreds of angry residents, including members of women's groups and students, squatted in front of the police station in the town, about 50 km from Hyderabad.

They were demanding that the accused be hanged immediately without inquiry and trial. Some protestors said these criminals had no place in society and hence they should be killed.
Police tightened the security and deployed additional force around the police station to prevent violence.

Later, in the evening, three police officials were suspended for negligence in duty in the aftermath of the heinous crime. Those who were suspended are -  S-I Ravikumar, Head Constable Satyanarayana Goud and Head Constable Venu Gopal Reddy. The action against them was taken after the victim's parents told the National Commission of Women about police negligence.

The 25-year-old veterinarian was gang-raped and killed allegedly by two truck drivers and two cleaners near a toll plaza on Outer Ring Road (ORR) at Shamshabad on the outskirts of Hyderabad on the night of Wednesday.

They later shifted the body to a place near Shadnagar town and set it afire. The charred body of the victim was found the next day.
Cyberabad Police on Friday night announced the arrest of the four accused, who allegedly trapped the victim by deflating a tyre of a scooty parked near the toll plaza.

The accused, two truck drivers and two cleaners, hail from Narayanpet district of Telangana. Police took the accused to crime scenes on Friday night to reconstruct the crime and record their statements. It is likely to seek custody of the accused for questioning.

Meanwhile, Union Minister of State for Home G Kishan Reddy is expected to visit the house of the victim and meet her family members. The National Commission for Women (NCW) is also expected to hold a press conference on the issue later today.