The MiG-35, which is produced at Russian Aircraft Corporation MiG factory in Lukhovitsy near Moscow, is in the race for the 114-fighter jet deal for the IAF. The other combat aircraft in the race for the mega IAF fighter deal are Dassault Aviation’s Rafale, F/A-18E/F Super Hornet built by Boeing, Lockheed Martin’s F-16 Fighting Falcon, Eurofighter Typhoon and Saab’s Gripen. 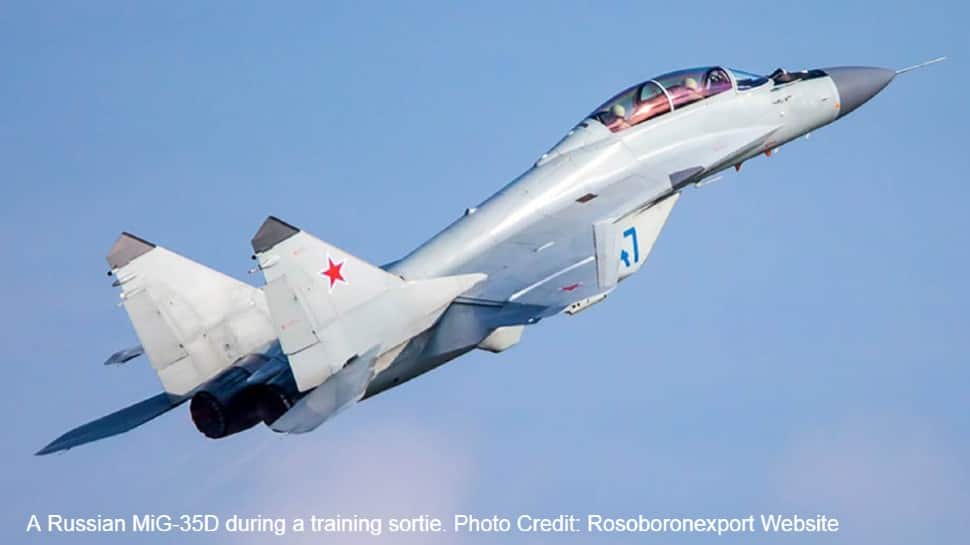 IAF Chief Air Chief Marshal Birender Singh Dhanoa has called Russia's MiG-35 4++ Generation combat plane "a completely new aircraft" but added that the force will select a new fighter only after following the due process of tender, evaluation and test flights. The IAF chief, who was in Russia from July 9 to 12, went to Russia's Kubinka air force base where he saw the MiG-35 jet.

"In Kubinka, I happened to see the MiG-35, which has undergone major changes and upgrades. This is a completely new aircraft - very interesting. But for us, the procurement system remains the same. If there is a need for any type of aircraft, we hold a tender for compliance with all the declared characteristics. And we proceed to consideration at the next stages only after our test pilot makes an introductory flight on the proposed aircraft," the IAF chief told Krasnaya Zvezda, the official newspaper of the Russian Ministry of Defense.

The MiG-35, which is produced at Russian Aircraft Corporation MiG factory in Lukhovitsy near Moscow, is in the race for the 114-fighter jet deal for the IAF. The other combat aircraft in the race for the mega IAF fighter deal are Dassault Aviation’s Rafale, F/A-18E/F Super Hornet built by Boeing, Lockheed Martin’s F-16 Fighting Falcon, Eurofighter Typhoon and Saab’s Gripen.

The Russian fighter comes in two variants - MiG-35 (single-seat) and MiG-35D (double-seat, can be used as a trainer). Built on the MiG-29K/KUB and MiG-29M/M2 fighters, the MiG-35 is the most advanced 4++ Generation multirole jet, according to Russian defence officials with a maximum g load of +10.

With nine hardpoints to carry missiles and bombs, and one 30 mm Gryazev-Shipunov GSh-30-1 autocannon with 150 rounds, the MiG-35/35D can engage stationary as well as mobile targets in any weather, day or night, in air and on the ground. The combat aircraft can be armed with a range of short and medium-range air-to-air missiles, air-to-surface missiles, guided aerial bombs, unguided rockets and bombs.

There are plans to make the MiG-35 capable of firing the Kh-36 Grom-1 AS-23 tactical air-to-surface cruise missile with 130-260 kilometre range. Slyusar had in January 2017 told Russian President Vladimir Putin that the MiG-35 could also be equipped with laser weaponry in the future.

Two FADEC RD-33MK Morskaya Osa engines power the fighter and can be equipped with a thrust vectoring nozzle to increase manoeuverability. Phazotron Zhuk-A/AE active electronically scanned array (AESA) radar, mounted on the MiG-35 has a range of 250 km and can detect 30 targets simultaneously, and engage up to 6 air targets and 4 ground targets together.

The MiG-35 has OLS-UEM (13SM-1) electro-optical targeting station to detect ground, sea and air targets. The infrared (FLIR) sensor fitted on the plane can see aerial threats from 55 km away while the multimode laser range finder has a range of 20 km. Its OLS-K/OLS-KE podded electro-optical targeting system can find ground targets up to 20 km and sea targets up to 40 km.