Though the Rafale planes would be officially inducted into the Indian Air Force (IAF) with the Defence Minister`s visit, they would start arriving in India only in May 2020 after training of pilots and personnel on it. The Defence Minister is scheduled to visit France to receive Rafale fighter jets on October 8, which is also the Indian Air Force Day. 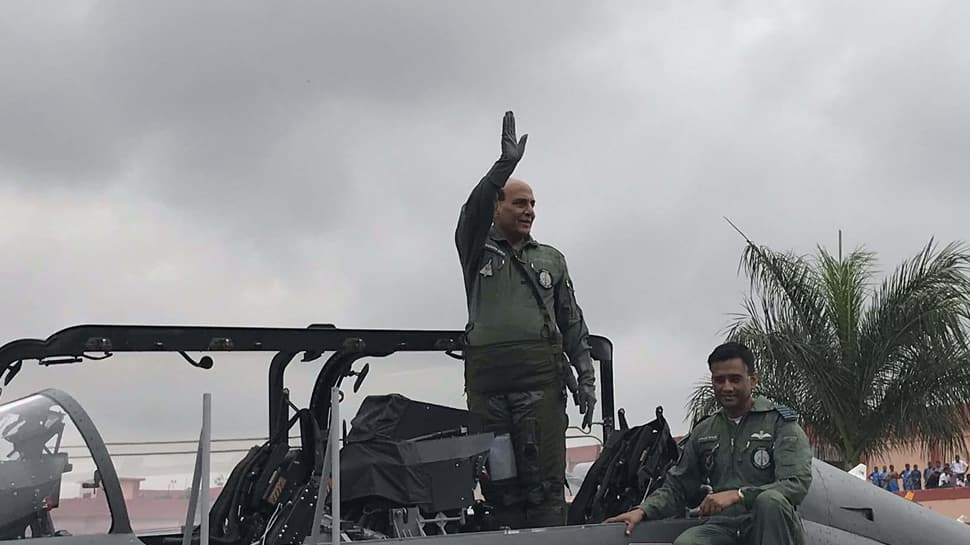 New Delhi: Union Defence Minister Rajnath Singh is scheduled to fly in the first Rafale combat aircraft manufactured for India in France during his visit there on October 8. Though the Rafale planes would be officially inducted into the Indian Air Force (IAF) with the Defence Minister`s visit, they would start arriving in India only in May 2020 after training of pilots and personnel on it. The Defence Minister is scheduled to visit France to receive Rafale fighter jets on October 8, which is also the Indian Air Force Day.

"As per plans, a French pilot will fly in the front cockpit while Rajnath Singh will sit in the rear cockpit. The first Indian Rafale aircraft with tail no RB-01 will be used for the sortie," sources in IAF said. The tail number has the initials of newly-appointed IAF chief Air Chief Marshal RKS Bhadauria in recognition of his role in the around Rs 60,000 crore deal signed in 2016 for 36 planes.

After receiving the Rafale fighter jets, the Defence Minister will hold talks with the French government on further strengthening the military ties. The Defence Minister will land in Bordeaux for officially receiving the plane on October 8 and then leave for Paris to hold talks on defence ties with his French counterparts on October 9, sources added.

From the IAF, newly appointed Vice Chief Air Marshal HS Arora is scheduled to accompany the Defence Minister for receiving the aircraft.

Earlier, the Air Chief was also supposed to travel along with the Minister but due to change in programme, he would now be busy with the Air Force Day celebrations in the national capital region on October 8. Top French military brass as well as senior officials of the Dassault Aviation, the makers of Rafale, will also be present at the handing over ceremony. The Indian planes have been equipped with a lot of India-specific enhancements, which have been fitted at a cost of around one billion euros.

The Defence Minister created history on September 19 by becoming the first defence minister to fly in indigenously developed Light Combat Aircraft (LCA) Tejas in Bengaluru. Shortly after landing, the Union defence minister posted a tweet saying flying on LCA Tejas was an amazing and exhilarating experience. He added that Tejas is a multi-role fighter with several critical capabilities and it will strengthen the air defence capabilities of the country.

Talking about his experience, Rajnath Singh said that it was very smooth and comfortable and he enjoyed the sortie. The Union defence minister congratulated HAL, DRDO and other agencies who are involved in development of Tejas. "It was very smooth&comfortable. I was enjoying. I want to congratulate HAL, DRDO&several concerned agencies. We have reached a level where we can export fighter planes across the world," said Rajnath Singh. Rajnath Singh took off from HAL Airport in Bengaluru and landed after a 30-minute sortie. The 68-year-old Rajnath Singh sat in the rear seat behind the pilot in the cockpit of the two-seater fighter jet.

Monsoon rains lash Delhi, operations at IGI Airport suspended for half an hour