If enemy attacks us, we'll give befitting reply like every time: Defence Minister Rajnath Singh

Addressing the armed forces of the country, he added that if the enemy country ever attacked India, like every time India will give it a befitting reply. 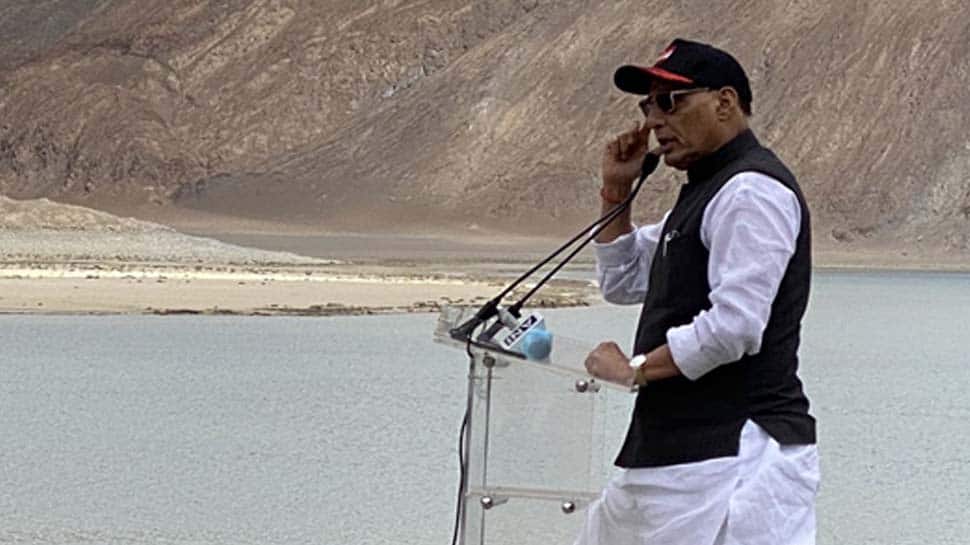 Union Defence Minister Rajnath Singh on Friday stated that whatever step India takes in the realm of national security, it is always for self-defence and not for attacking others. Addressing the armed forces of the country, he added that if the enemy country ever attacked India, like every time India will give it a befitting reply.

History is a witness to the fact that India has never attacked anywhere and anytime to capture the land of another country. India believes in winning hearts, not land. But this does not mean that we will let our self-esteem come. Whatever we do in the realm of national security, we always do it for self-defence and not for attacking others. If the enemy country ever attacked us, like every time we will give it a befitting reply," Singh tweeted in Hindi.

He also said, "Our forces are pioneers in the defence of the nation, so I assure you that the government is doing all that is necessary to maintain your high morale and fulfill your Operational Requirement.

The Defence Minister paid special tribute to the soldiers who sacrificed their lives in Galwan Valley. "This country can never forget his bravery and his supreme sacrifice. I want to assure their families that they are not alone but the whole country stands with their families," he said.

"Today the country is confident that no force can occupy our one inch of land while you are deployed. If someone dares to do this, then he has to suffer heavy consequences and will have to suffer even further," Singh said to the armed forces.

"My dear brothers and sisters of the armed forces, India is going to celebrate 74th Independence Day from midnight tonight. On this auspicious occasion, I extend my heartiest congratulations to all the soldiers and military officers working in the armed forces on behalf of the grateful nation. I wish all the serving personnel as well as ex-servicemen of the Army, Navy, Air Force and Coast Guard. I also congratulate the families whose loved ones are far away from them not only in difficult and inaccessible areas but also in the deep sea, said the Defence Minister.

"Prime Minister Narendra Modi while accepting the demand for reform in the field of defence, made a historic announcement on the Independence Day last year to form the CDS from the ramparts of Lal Qila. The formation of the CDS has also ensured better coordination between the armies. It will have far-reaching results," said the Defence Minister.

"You will remember that for a long time there was a lack of new modern combat aircraft in the Indian Air Force. As soon as our government arrived, respected Prime Minister, Narendra Modi, started a government-to-government agreement with France to procure 36 Rafale as soon as possible. It is good news that Rafale's consignments have started arriving. Five Rafale aircraft arrived at Ambala Air Base two weeks ago. The rest are also coming soon. Touch down of Rafale fighter aircraft in India marks the beginning of a new era in our military history," he stated.

He added, "In addition, 222 Squadron of Sukhoi MKI has been stationed at Thanjavur in Tamil Nadu which is equipped with BrahMos missile. This gives us Strategic Depth in the Indian Ocean."

"On May 2020, the 18th Squadron of Air Force Station Salur has been revived through the second camp of LCA Tejas. This is a major step towards self-sufficiency. Also, to make the Air Force's capability stronger, it has also been approved to purchase 21 MiG-29 aircraft," Singh stated.

Speaking on the coronavirus pandemic, he said, "The Armed Forces have always played a decisive role in any kind of disaster in the country from time to time. The year 2020 will be known as COVID-19 year in the pages of history. The whole world has stopped because of this epidemic. India is also not untouched by this. Ministry of Defense and its various organs viz. Armed Forces, AFMS, DRDO, DPSUs, OFB, Cantonment Council, Ex-Servicemen Welfare Board, National Cadet Corps and other autonomous units of the Ministry have been active from the very beginning for the prevention of coronavirus."

"The service work that the armed forces have done in times of crisis fills us with pride. DRDO in collaboration with Ministry of Home Affairs, Ministry of Health and Family Welfare, Armed Forces, and industry groups built the Sardar Vallabhbhai Patel COVID Hospital in New Delhi in a record time of 12 days. Border Road Organization personnel also deserve congratulations, who started a new era by establishing Kailash-Mansarovar Yatra and border area connectivity even in the most inaccessible conditions," said the Defence Minister.

"Last year, in honour of former prime minister Atal Bihari Vajpayee, on his birthday, Prime Minister Narendra Modi named the Rohtang Tunnel as 'Atal Tunnel'. This 8.8 km long tunnel is likely to be completed by September 2020. Due to its construction, the road distance between Manali and Leh will be reduced by 46 kilometres and the road will remain open for twelve months between Lahaul and Spiti," he further said.

Singh said, "Empowerment of women in the armed forces has been a major focus in the last five years. Prime Minister Narendra Modi has always supported the idea of the permanent commission of women and during his Independence Day speech of 2018, he also announced this. The Ministry of Defence has issued a formal government approval letter to provide a permanent commission to women officers in the Indian Army on July 23 and thus paved the way for empowering women officers to discharge large roles in the organization."

"The government has also decided to give invalid pension to our Armed Forces personnel who become disabled during the unequalled service of the nation under 10 years. Earlier this pension was only given to Armed Forces personnel serving 10 years or more. Apart from this, the amount of ex-gratia has been increased four times per Battle Casualty (fatal) and Battle Casualty (Disability 60 per cent and above) has been increased from the current Rs two lakh to Rs eight lakh," he added.

He concluded saying, "With these words, I once again extend my heartfelt congratulations to you and your family on the eve of the 74th  Independence Day. We have got this freedom after hundreds of years of efforts and the sacrifice of our lives of millions of young people."