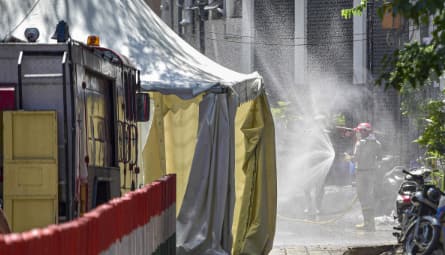 New Delhi: India saw a steady rise in the number of coronavirus COVID-19 positive cases on Thursday (April 2, 2020) with the figure rising above 2000 to touch 2069 with 53 deaths. Acting tough against the Tablighi Jamaat, whose congregation at Delhi's Nizamuddin is one of the reasons for the jump in the number of positive cases in the last few days, cracked the whip on the Muslim religious body.

According to the latest Ministry of Health and Family Welfare data, the numbers of active cases in India are 1,860 while 156 patients have been cured, discharged or migrated and 53 died. In the total tally, about 400 positive COVID-19 cases have been found whose epidemiological linkage can be traced to the Tablighi Jamaat cluster, said the Union Health Ministry while asserting that there was no evidence of widespread community transmission. Notably, 20 existing and 22 potential hotspots have been identified across the country.

A Home Ministry official stated that 9,000 Tablighi Jamaat members and their primary contacts have been quarantined till now across the country following "massive efforts" to check the outbreak. The Centre also directed all the states and union territories that "lockdown measures should be implemented in letter and spirit".

The Home Ministry also informed that at least 960 foreigners linked to the Tablighi Jamaat have been blacklisted and their tourist visas cancelled after they were found to be involved in activities related to Jamaat in the country in violation of the norms. It directed Delhi Police and the Director Generals of Police (DGPs) of concerned states to take necessary legal action against the 960 foreigners for violating provisions of the Foreigners Act, 1946, and the Disaster Management Act, 2005.

The action comes after the Tablighi Jamaat's congregation at south Delhi's Nizamuddin emerged as one of the coronavirus COVID-19 hotspots in the country.

Punya Salila Srivastava, a joint secretary in the Union Home Ministry, stated that out of about 2,000 Tablighi Jamaat members in Delhi, 1,804 have been shifted to quarantine centres while 334 symptomatic persons admitted to hospitals.

She added that among the ones in Delhi, 250 are foreigners. "The home ministry along with states and union territories launched a massive effort and about 9,000 Tablighi Jammat workers and their primary contacts were identified and quarantined. Among these, 1,306 people are foreigners."

Union Home Secretary Ajay Bhalla also wrote to all chief secretaries of the states and union territories to take action against those violating the lockdown or making false claims under the Indian Penal Code and the Disaster Management Act. Bhalla averred those violating these laws can be punished with a jail term of up to two years and fine.

Delhi Chief Minister Arvind Kejriwal pointed out that there are 208 COVID-19 patients in the national capital, of which 108 were evacuated from the Tablighi Jamaat's Nizamuddin Markaz. He said two people who had attended the congregation died due to COVID-19 on Thursday and cautioned that the number of positive cases may shoot up in the national capital in the coming days.

Violence against doctors and others involved in tackling the coronavirus outbreak was reported from several parts of the country. Seven persons were arrested for the alleged attack on health workers in Madhya Pradesh's Indore while they were trying to quarantine the relatives and acquaintances of a COVID-19 patient. They were attacked with stones by an unruly mob leaving two women doctors injured. A video of the attack went viral on social media.

In Bengaluru, too, ASHA (Accredited Social Health Activist) workers were threatened, abused and assaulted while trying to carry out a survey in Sadiq area to trace those showing symptoms of coronavirus.

Several states including Maharashtra, Tamil Nadu, Andhra Pradesh and Kerala reported a significant rise in the number of positive cases.

In Maharashtra, at least 81 more tested positive during the day, taking its tally to 416, while two more patients succumbed to the infection taking the death toll to 19. The death of a COVID-19 patient from Mumbai's Dharavi, one of the biggest slums in Asia, sparked fears of its spread in the highly congested area.

Prime Minister Narendra Modi also hinted at a "staggered" exit from the ongoing lockdown after the 21-day period ends on April 14 while pitching for efforts on a war footing to identify and isolate COVID-19 hotspots.

The Prime Minister, who will share a video message with people on Friday morning, interacted with chief ministers through a video conference and told them to focus on COVID-19 containment measures -- testing, tracing, isolation and quarantine -- and said it was imperative to work on a war footing, identify hotspots, encircle them and ensure that the infection does not spread out.