India will use all its might to protect its sovereignty, says President Ram Nath Kovind amid Indo-Pak tensions

The President said that the country's armed forces, exemplified by the air warriors, "reflect our firm resolve to defend our nation". 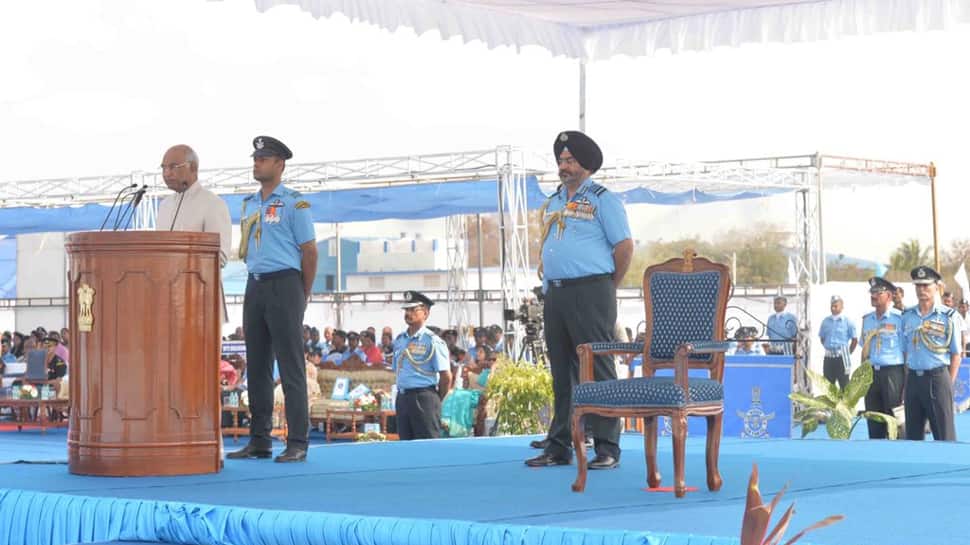 COIMBATORE: President Ram Nath Kovind on Monday said that India will use all its might to protect sovereignty of the nation. He was referring to the airstrikes by the Indian Air Force on the terror camps in Pakistan following the Pulwama terror in which 40 CRPF personnel were martyred on February 14.

"India remains firmly committed to peace, but in case the need arises, we will use all our might to protect the nation's sovereignty. I am confident that our valiant men and women in uniform will rise to the occasion," Kovind said.

The President added that the country's armed forces, exemplified by the air warriors, "reflect our firm resolve to defend our nation".

"Their valour and professionalism was on display very recently, as the Indian Air Force carried out pre-emptive strikes on a known terrorist camp," the President said.

President Kovind presents Colours to Air Force Station Hakimpet and 5 Base Repair Depot at Air Force Station Sulur; says the resilience and tenacity displayed by our valiant air warriors is a great source of pride for the nation pic.twitter.com/btqS1igzzh

Tensions between India and Pakistan have been heightened after 40 CRPF personnel were martyred in a suicide bombing attack by Jaish-e-Mohammed. Thirteen days after the terror attack, Indian fighters bombed the Pakistan based terror group's biggest training camp near Balakot, deep inside Pakistan. A day later, Pakistan retaliated by attempting to target Indian military installations. However, the IAF thwarted their plans.

Electronic surveillance of Indo-Bangladesh border to begin on Tuesday