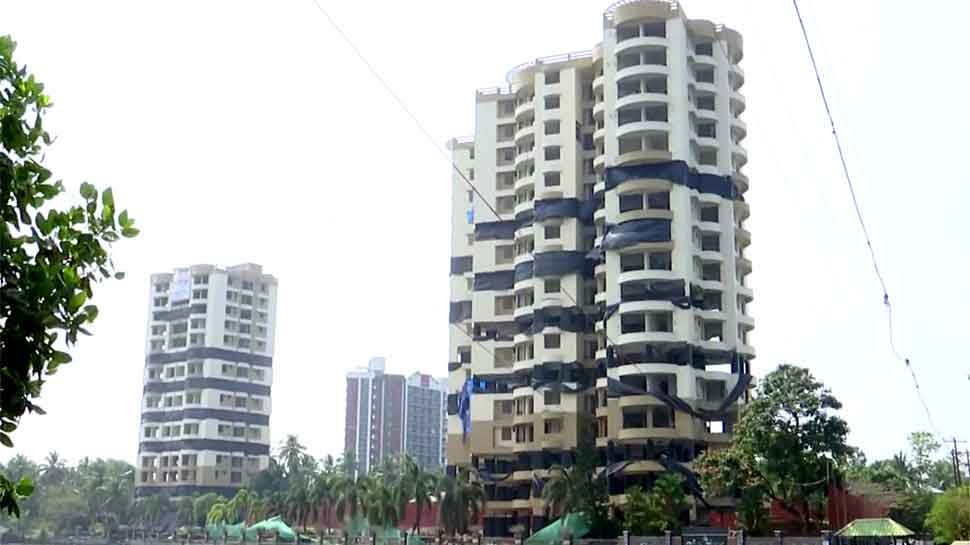 Kochi: Two out of four illegal high-rise apartment complexes in Kerala's Maradu were demolished on Saturday (January 11) for violating coastal regulation zone norms after a Supreme Court ruling last year. The illegal structures were brought down by the use of implosion technology amidst tight security.

Watch the demolition of illegal apartment towers through controlled implosion below:

#WATCH Kochi: Alfa Serene complex with twin apartment towers in Maradu also demolished.2 out of 4 illegal apartment towers have been demolished through controlled implosion,final round of demolition to take place tomorrow.Sec 144 of CrPC is enforced on land, air&water in the area pic.twitter.com/WsadhqPuDF

Ahead of the demolition prohibitory orders were put in place on both land, air and water in the area.The district administration has imposed Section 144 of the Code of Criminal Procedure (CrPC) in the 200-meter radius of the apartment complexes.

Half an hour before the implosion, the first siren was sounded for one whole minute to ensure that people have left the demolition zone. A police team then searched for the evacuation area.

At 10.55 am, another one-minute siren alerted motorists and all traffic movement on major roads was stopped. Following this, the flats were razed down.

After more than a decade of litigation, the four apartment complexes in Maradu were ordered to be demolished by the Supreme Court for violation of CRZ norms. The rest two buildings, Golden Kayaloram and Jain Coral, will be razed on Sunday. The complexes housed a total of 343 flats.