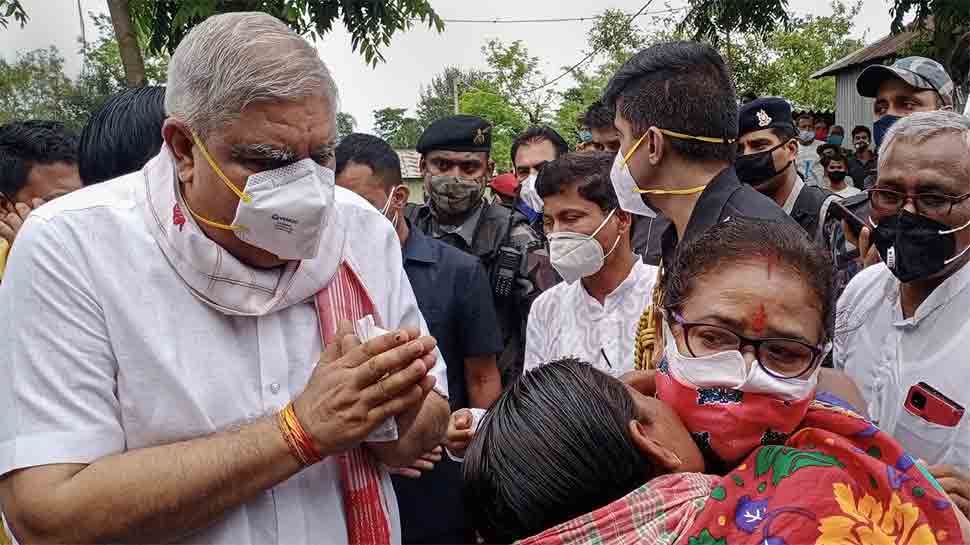 Dhubri: West Bengal Governor Jagdeep Dhankar on Friday (May 14) accused Chief Minister Mamata Banerjee of remaining 'silent when there was bloodshed' during alleged post-poll violence in the state. Dhankhar said that the Trinamool Congress government could have easily prevented the situation from deteriorating by providing compensation and rehabilitation to affected families and through area domination to prevent violence.

"There was bloodshed in the state. I should not say much as the matter is under investigation but the Chief Minister's silence is a matter of concern and worry for me", the Governor said after visiting the Ranpagli camp in Assam's Dhubri district where people from Cooch Behar in West Bengal have allegedly taken shelter after announcement of election results.

On May 13, Governor Dhankar had visited villages affected places in Cooch Behar district. During his visit, he was shown black flags at Sitalkuchi, where four villagers died after firing by central forces during the elections, while 'Go back' slogans were raised at Dinhata during his visit to Cooch Behar district to meet people allegedly affected in post-poll violence. "He is trying to instigate unrest when the situation in the state is peaceful since May 9," TMC Rajya Sabha MP Sukhendu Sekhar Roy said.

"Apprehending that the administration will not help them, these people had to flee from their homes and there cannot be anything more shameful for me and the government than people having to take shelter in another state to save their lives," Governor Dhankar said.
People at the shelter claimed to have fled their homes in Bengal after the poll results were out on May 2. They also alleged that their houses were "ransacked by Trinamool Congress goons".

Post-poll violence in West Bengal has claimed 16 lives, with all parties including the ruling TMC complaining of attacks by rivals. Chief Minister Mamata Banerjee has promised strict corrective action and announced a compensation of Rs 2 lakh for each of those killed, after assuming office on May 5.

She has blamed a lax administration under the watch of the Election Commission compounded by a series of transfers of state and district police chiefs ordered by the electoral watchdog, for the state of affairs.