On the last day of his week-long visit to the United States of America, Prime Minister Narendra Modi met the leaders of Bangladesh and Bhutan on the sidelines of United Nations General Assembly (UNGA). 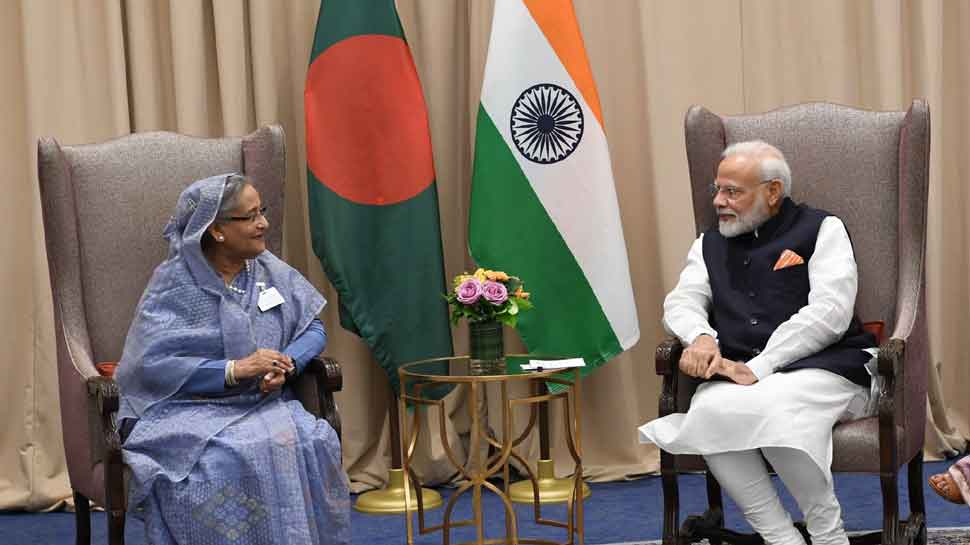 New York: On the last day of his week-long visit to the United States of America, Prime Minister Narendra Modi met the leaders of Bangladesh and Bhutan on the sidelines of United Nations General Assembly (UNGA).

This was the first meeting of PM Modi with Bangladesh Prime Minister Sheikh Hasina during which "the two leaders reviewed the excellent state of bilateral relations and cooperation, and agreed to maintain the momentum to take the India-Bangladesh relationship to new heights", an official release by Ministry of External Affairs said.

According to the statement, both the world leaders "reiterated their zero-tolerance approach to terrorism and violent extremism" and "agreed that a strong partnership in security had built trust and mutual confidence between the two countries."

Bangladeshi Prime Minister is likely to visit India in the first week of October. Sheikh Hasina also participated in the special commemorative event organized by India to mark the 150th anniversary of the birth of Mahatma Gandhi at the United Nations.

On meeting the Bhutanese Prime Minister Dr Lotay Tshering, PM Modi discussed the progress made in sectors like hydropower cooperation and digital connectivity among others.

Deepening the bond with a valued neighbour.

Excellent meeting between PM @narendramodi and @PMBhutan in New York. A variety of issues were discussed during the meeting. pic.twitter.com/HpJPGo4flV

PM Modi had visited Bhutan a month ago where he inaugurated the Mangdechhu hydroelectric project. Bhutan is the founding member of Coalition for Disaster Resilient Infrastructure (CDRI) which was launched at the UN by Prime Minister on Monday during the Climate Action Summit.

Earlier in the week, PM Modi met Maldives President Ibrahim Mohamed Solih. The Maldives was the first country where PM Modi had visited after taking charge in the second term post BJP's thumping victory in the Lok Sabha elections 2019.

New Delhi will be training Maldivian cricket team from next month as part of increasing people to people exchanges' initiative with the neighbouring countries.