Veteran BJP leaders LK Advani and MM Joshi will not be able to attend the Bhoomi Poojan due to their old age amid COVID-19 situation. 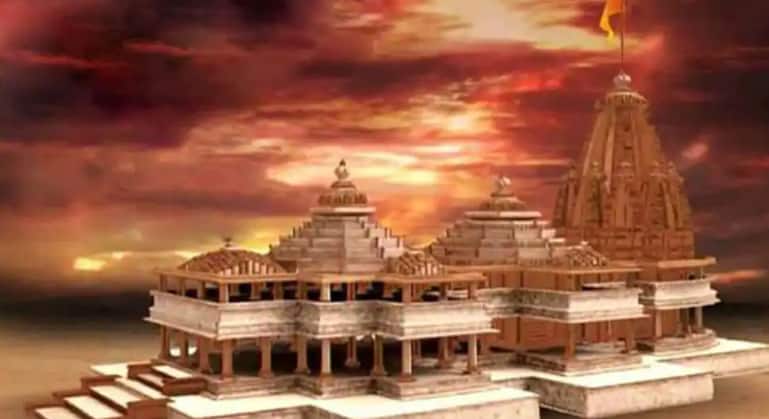 New Delhi: Sri Ramjanmbhoomi Teerth Kshetra Trust has invited only 175 guests in the Bhoomi Pujan ceremony for the Ram temple in Ayodhya on August 5. The esteemed gathering will attend the historic occasion when Prime Minister Narendra Modi will perform the ceremony.

Of these 175 guests, 135 Sadhus and saints have been invited and this included saints from Nepal to participate in the Bhoomi Pujan. The invitation has also been sent to family members of some kar sevaks including Kothari brothers' sister Purnima Kothari.

The Prime Minister is the first invitee, while Rashtriya Swayamsevak Sangh (RSS) chief Mohan Bhagwat will also participate. PM Modi will worship 9 shilas (stones), associated with Ram temple movement during 1989-90, to be placed during the Bhoomi Pujan. One of these shilas will be kept in the sanctum sanctorum, while the rest will be placed in other places of the temple.

The contribution of Ashok Singhal, who is known as the key architect of the Ram Mandir movement, will also be remembered during the Bhoomi Poojan. Ashok Singhal, who was the Vishwa Hindu Parishad’s international working president for over 20 years, passed away in November 2015.

Mahesh Bhagchandka and Pawan Singhal will participate in the Bhoomi Pujan representing the family of Ashok Sinhal. They will reportedly sit with the Prime Minister in the ceremony.

Uma Bharti, who was also at the forefront of the Ram temple movement, today tweeted that she will not be able to attend the Bhoomi Pujan ceremony due to coronavirus pandemic situation. She has urged the officers of Shri Ram Janmabhoomi Nyas of Ayodhya and Prime Minister's Office (PMO) to remove her name from the list of invitees.

Uttar Pradesh DCM Keshav Prasad Maurya, who was closely involved in the Ram temple movement, received an invitation from the Trust general secretary Champat Rai today to attend the ceremony.

Meanwhile, soil and water from 2000 different holy places across have reached Ayodhya for the ceremony. This includes holy water from 100 rivers, of these key rivers, are Ganga, Yamuna, Narmada, Godavari, Krishna, Kaveri, Indus, Brahmaputra, Jhelum, Sutlej, Ravi, and Vyas.

Ahead of the Bhoomi Pujan of Ram temple, there will be Ram Archana on August 4 at 8:30 am in the Ram Janmabhoomi campus in which Lord Rama, King Dasharatha, Queen Kaushalya will be worshiped for about 5:30 hours. Those who helped Lord Ram in his fight against Lanka King Ravana will also be worshiped. They include Hanuman, Nal-Neel, Sugriva, Jamwant, Vibhishan along with others.

The rituals preceding Bhoomi Pujan have already started in Ayodhya with 'Gauri Ganesh' puja on Monday at 8 am today amid chanting of mantras by 11 priests. Priests from Kashi, Kanchi, and Delhi performed the 'Gauri Ganesh' puja. 'Ramayana path' was also organised in various other temples.