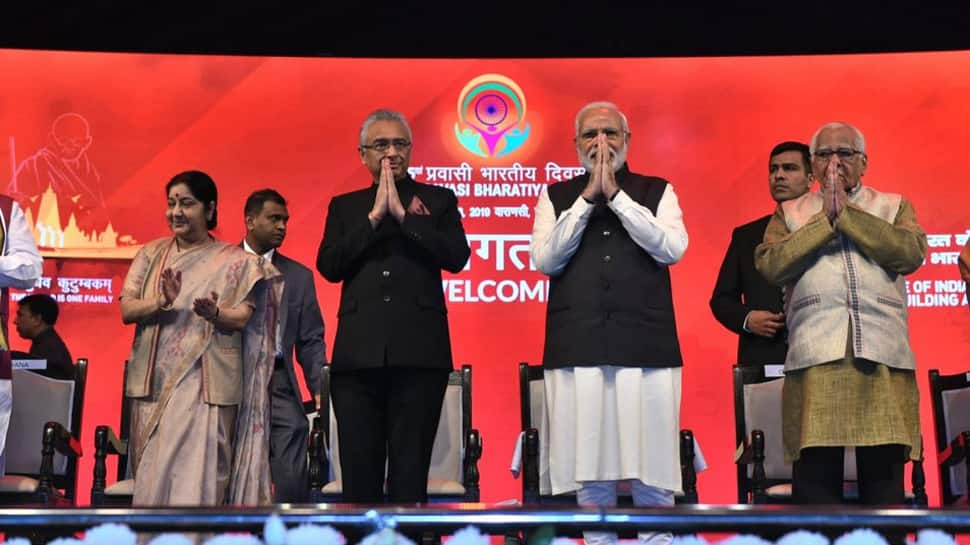 Varanasi: Prime Minister Narendra Modi on Tuesday inaugurated the 15th Pravasi Bharatiya Divas in his parliamentary constituency Varanasi. He will also hold talks with his Mauritian counterpart Pravind Jugnauth after the inaugural session.

For the first time, the three-day-long convention is being organised from January 21 to 23 instead of January 9 to allow participants to visit the Kumbh Mela in Allahabad and attend the Republic Day parade. The theme of this year's convention is 'role of the Indian diaspora in building new India'.

PM Modi: I have said earlier on this forum, I want to repeat this today that in whichever country you live in, motivate at least 5 families around you to come to India. Your efforts will play an important role in enhancing tourism in the country

PM Modi: You can play a big role in Research, Development and Innovation. The government is also trying to bring India's Start-ups and NRI Mentors together on one platform. Defence manufacturing can also be a key sector for you to work in.

One with the young minds!
PM @narendramodi & EAM @SushmaSwaraj with the winners of 'Bharat Ko Janiye Quiz', organised by @MEAIndia. pic.twitter.com/Ff4JLhyBn6

PM Modi: Along with the passport, the rules related to visa are also being simplified. With the convenience of e-VISA, you are able to save time and your problems have also been reduced. Still, if there are any problems, steps are also being taken to improve it. Out government has also made the process of converting PIO cards into OCI cards easier

PM Modi: Today is a special day for me. Along with being present here as the Prime Minister, I am also here as the host of the event as an MP from Varanasi. I hope that the blessings of Baba Vishwanath and mother Ganga remain on all of you.

PM Modi: I consider NRIs India's brand ambassadors. They are the symbols of our capacities and capabilities. People of Indian origin are in leadership roles in countries such as Mauritius, Portugal and Ireland.