Prime Minister Narendra Modi described  Moshe's story as a "miracle" which continues to inspire everyone. Moshe was two years old when his parents were killed in a terror attack at the Nariman House in Mumbai on November 26, 2008.

New Delhi: Prime Minister Narendra Modi on Monday (December 2) congratulated 26/11 Mumbai terrorist attack survivor Moshe Holtzberg on the occasion of his bar mitzvah. The Prime Minister described his story as a "miracle" which continues to inspire everyone. Moshe was two years old when his parents were killed in a terror attack at the Nariman House in Mumbai on November 26, 2008.

Bar mitzvah is said to be the initiation ceremony of a Jewish boy who reaches the age of 13, and is considered to be ready to observe religious precepts, besides being eligible to take part in public worship.

In a letter to Holtzberg, Modi said the prayers of the people of India would continue to bless him for a long, healthy and successful life. He added that the perpetrators of the "cowardly terrorist attack" clearly failed in their intent as they could not subdue India's vibrant diversity or dampen its spirit to march forward.

Referring to his meeting with Moshe Holtzberg in Israel back in 2017, the Prime Minister expressed hope that his wish to return to Mumbai as the director of the Chabad House comes true. 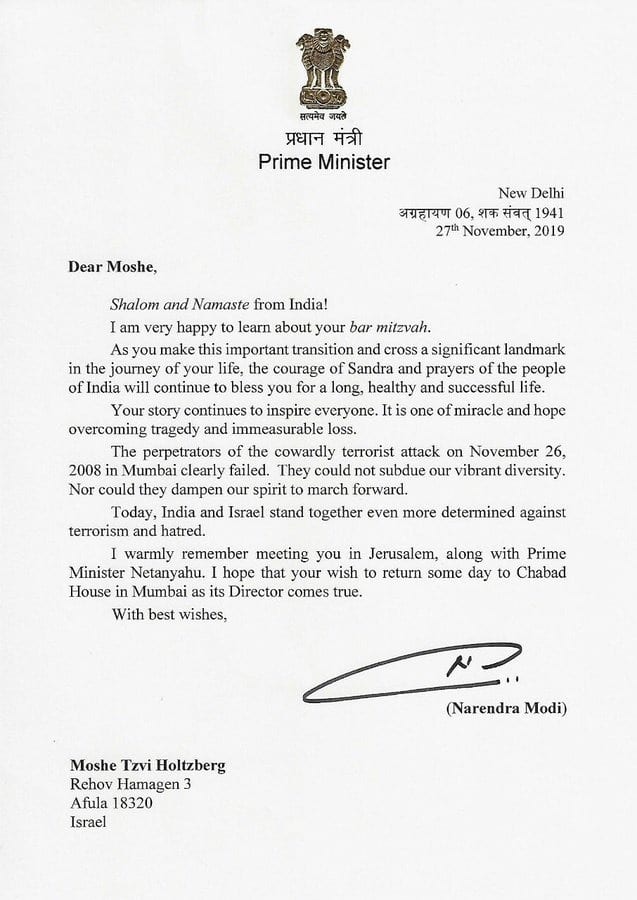 Mumbai had come to a standstill 11 years ago on November 26 when 10 Lashkar-e-Taiba (LeT) terrorists, who came to the city via sea route from Pakistan, carried out a series of coordinated shooting and bombing attacks that killed 166 people and injured over 300 in India`s financial capital.

Moshe had survived the terror incident and became the face of the innocent victims of ruthless terrorism.