These 44 women, hailing from different backgrounds, had broken barriers in various streams ranging from social development to technological innovations and medical excellence. 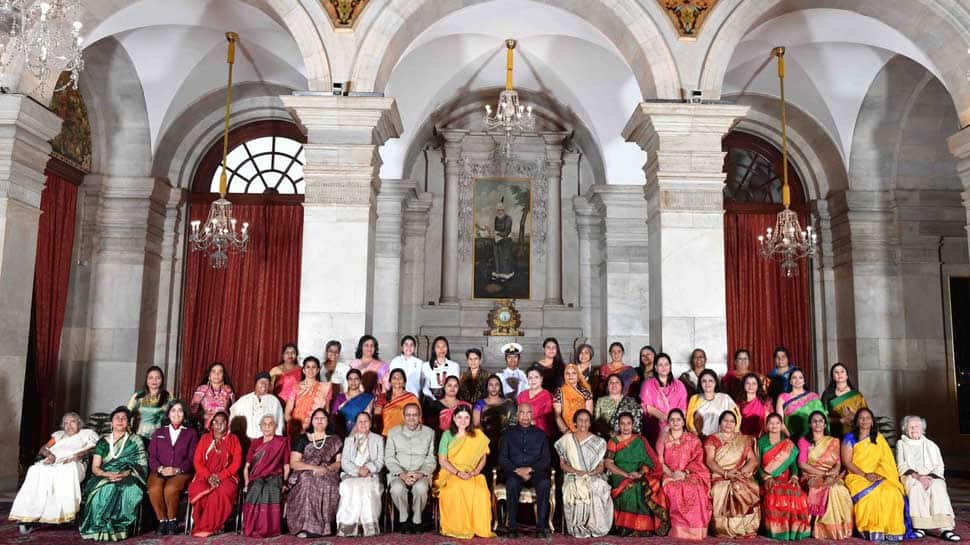 New Delhi, March 8 (IANS) It was women power all the way at Rashtrapati Bhavan on Friday evening when as many as 44 women were honoured by the President of India with the prestigious Nari Shakti Awards, the highest civilian honour for women in India, on the occasion of International Women's Day.

These 44 women, hailing from different backgrounds, had broken barriers in various streams ranging from social development to technological innovations and medical excellence.

For 30-year-old Ruma Devi, who hails from Barmer in Rajasthan, receiving an award from the President was something she had never imagined till date.

"The award is a huge boost not just for me but for the society as well," Ruma told IANS.

Married at the age of 17, it was not a cake walk for Ruma. With skills in stitching and embroidery, she gathered some women to form a self help group that would make bags and other handcraft items.

"It was not easy in the beginning, had to convince my husband and in-laws. But now, they are very supportive. I have only been doing my work and didn`t expect such a prestigious recognition," she added.

Like her, for acid attack survivor Pragya Prasun, the award is a hope to change society`s approach towards those who have been victims of acid attacks.

"Acceptance and love from the society is the biggest challenge. People still judge an acid attack survivor on how they look. We are not welcomed easily," Pragya noted.

Pragya was attacked in 2006, just 12 days after her marriage. She said her life had turned upside down but the incident failed to deter her.

"The attack had deeply affected me, psychologically mostly. But then I decided not to remain as a victim. I made a point to fight back and now I offer free surgeries to those who have been victims of acid attacks," she stated.

Pragya runs an NGO, Atijeevan Foundation, that helps survivors of acid attacks become economically independent. Her NGO has so far helped more than 200 such survivors.

The One Stop Centre (OSC) of Lucknow also received the award for its exceptional progress in improving child sex ratio at birth under the Beti Bachao Beti Padhao scheme.

According to the Women and Child Development Ministry, the selections from the nominations were finalized after considering their contribution in empowering vulnerable and marginalized women.

This year, among the awardees are scientists, entrepreneurs, environmentalists, social workers, farmers, artists, masons, woman marine pilot, woman commando trainer, journalists and film-makers and many others, who have faced their own unique challenges, but have not been deterred from achieving their dreams.