Rajnath Singh, 68, sat in the rear seat behind the pilot in the cockpit of the two-seater fighter jet. 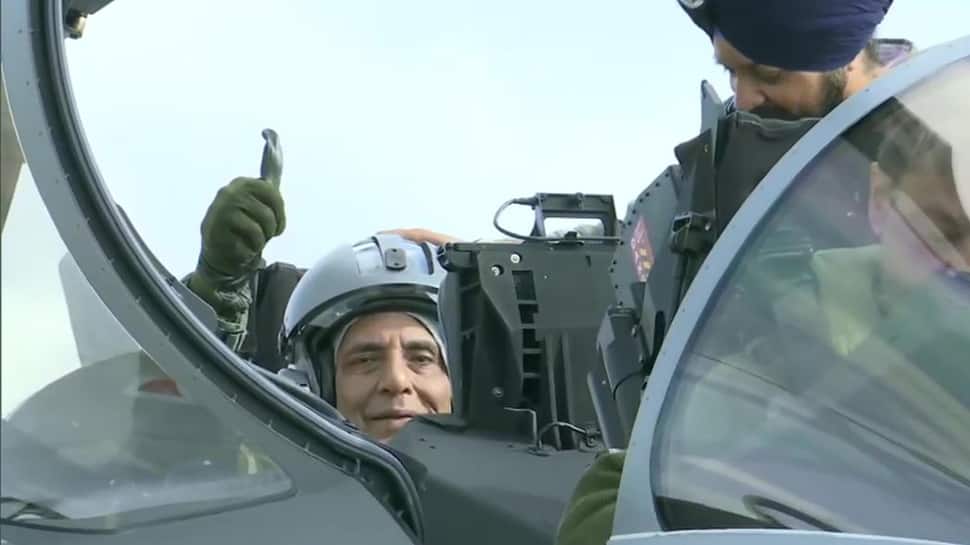 Union Defence Minister Rajnath Singh on Tuesday created history by becoming the first defence minister to fly sortie in Rafale fighter jet from Dassault Aviation Mérignac facility in France. Rajnath Singh, 68, sat in the rear seat behind the pilot in the cockpit of the two-seater fighter jet. The head test pilot of Dassualt Aviation, Philippe Duchateau, flew the fighter jet.

Earlier on Tuesday, the Defence Minister received the first of the 36 Rafale fighter jets on behalf of the Indian Air Force (IAF) at Merignac in France. Rajnath Singh also performed a 'Shastra Puja' on the occasion of Dussehra.

"I am told that Rafale is a French word meaning gust of wind. I am sure the aircraft will live up to its name. I believe Rafale will boost India's air dominance exponentially to ensure peace and security in the region," the defence minister said after receiving the Rafale jet.

"I am happy that the delivery of Rafale aircraft is on schedule, I am confident that this will add further strength to our Air Force. I wish cooperation between our two major democracies further increases in all sectors," added Rajnath Singh.

Along with the air dominance Sukhoi Su-30MKIs, Rafale omnirole fighter will give the IAF an extremely potent combination to deal with any threat from across India's western as well as northern borders.

The French combat aircraft is not only one of the most advanced 4++ Generation fighter but also packs a lethal punch with an array of missiles and bombs, including MBDA's deadly Meteor and Scalp as part of the Rafale weapons package. While Meteor is the world's best Beyond Visual Range Air-to-Air Missile (BVRAAM), the fire-and-forget Scalp is a long-range, air-launched, stand-off attack missile which can penetrate deep into hard rock and fortified targets.  It is to be noted that India had inked a deal worth Rs 59,000 crore with France in September 2016 for 36 Rafale fighter jets.