Besides PM Modi, Lok Sabha Speaker Om Birla was among several dignitaries present during the 82nd All India Presiding Officers’ Conference in Shimla that would dwell on the decay in the discipline and decorum of legislatures. 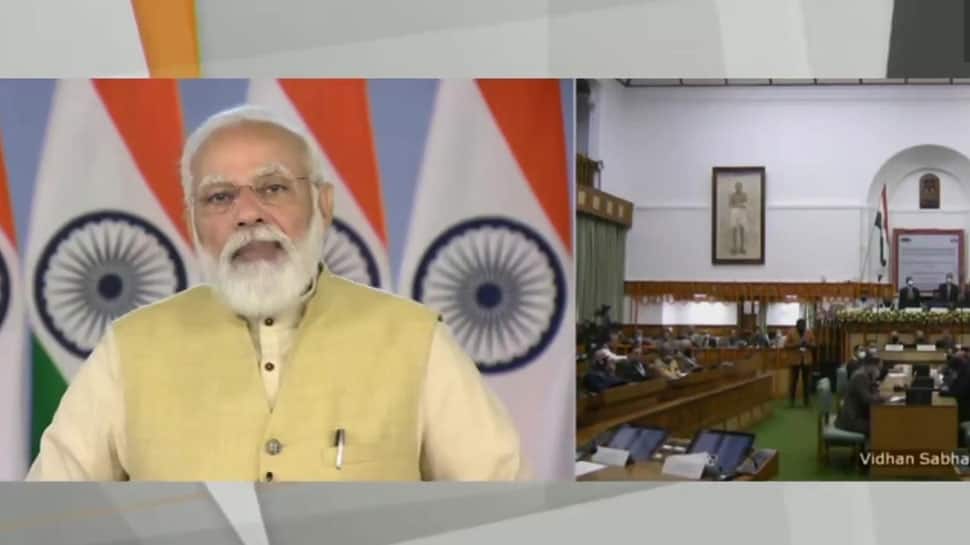 SHIMLA: Prime Minister Narendra Modi on Wednesday said that democracy in India is more than just a system and that the role of states in very important in the country’s federal democratic setup.

Sharing his thought with the presiding officers, PM Modi said that doing one's duty should be the mantra for the country for the next 25 years as India heads towards the centenary of its Independence, and this message should go out from its Parliament and state legislatures.

PM Modi also asserted that it is our legislatures' responsibility to be vigilant about any discordant voice about the country's unity and integrity. It is our unity that preserves our diversity, he added.

The Prime Minister also pushed the idea of having a separate time for a quality and healthy debate in legislatures which should be serious, dignified and devoid of political potshots at others.

With Parliament often witnessing disruptions over a variety of issues, PM Modi said the conduct of lawmakers should be in line with Indian values.

“For India, democracy is not just a system. Democracy is India's nature and its natural tendency,” PM Narendra Modi said while speaking at the inaugural session of 82nd All India Presiding Officers’ Conference (AIPOC) in Shimla, via video conferencing.

For India, democracy is not just a system. Democracy is India's nature and its natural tendency: PM Narendra Modi at the inaugural session of 82nd All India Presiding Officers’ Conference in Shimla, via video conferencing pic.twitter.com/EzC7G3Bp0X

The AIPOC will discuss a range of issues - the journey of a century and the responsibility of presiding officers towards the Constitution, the House and the people.

The PM while lauding the nation’s collective fight against the coronavirus pandemic, said, “The nation fought this big battle in unity by bringing all the states together, this is historic in itself. Today India has crossed the milestone of 110 crore vaccine doses. Something that seemed impossible once, is now becoming possible.’’

The PM while resolving to take the nation to unparcelled heights in the years to come, said, “We've to take the nation to new heights. We've to achieve extraordinary goals. This resolve can be completed only with the efforts of everyone. When we talk of everyone's efforts in democracy, in India's federal system, the role of all states is its major foundation.’’

“The gradual decay in the discipline and decorum in the legislatures is a matter of concern and Shimla Conference would ponder over that,” he said.

Birla said there was an urgent need to rationalise the powers and jurisdiction of the Presiding Officers for putting in place a robust system for the implementation of the Anti-Defection Law.

Speaking on the financial autonomy of the state legislatures, Birla informed that this matter assumes significance in the functioning of legislative bodies and AIPOC has discussed the matter on several occasions. AIPOC is celebrating its hundred years in 2021.

Not asking employees to work from home, Centre tells SC in affidavit on air pollution