Around 1,400 members of the 'sabha', including the Hindutva organisation's chief Mohan Bhagwat and 'sar karyavaha' (general secretary) Bhaiyaji Joshi, are taking part in the three-day event. 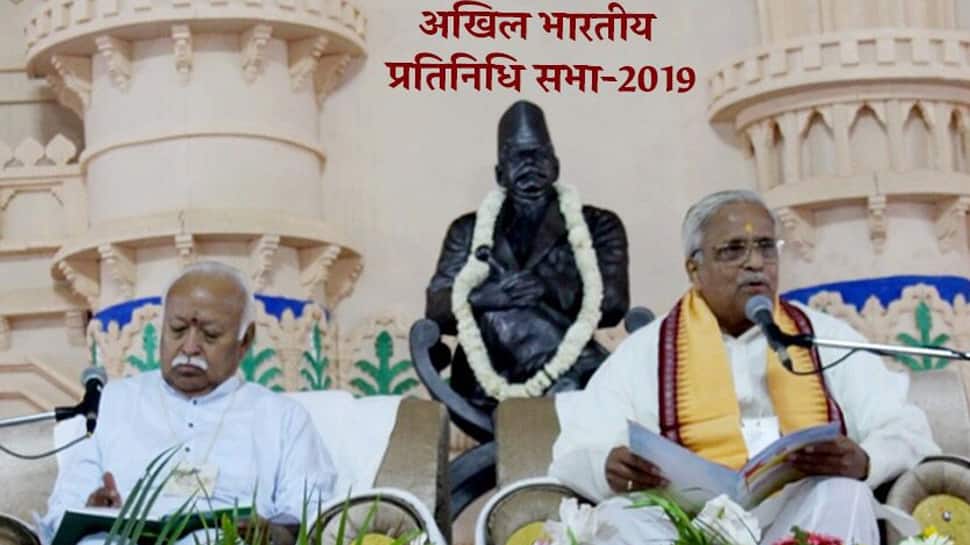 Gwalior: The RSS, on the second day of its Akhil Bharatiya Pratinidhi Sabha meet in Madhya Pradesh's Gwalior on Saturday resolved to "rebuild" the Indian family system which is "torn by social change".

The 'sabha', the highest decision-making body of the Rashtriya Swayamsevak Sangh, also called for organising various events to make the people, especially youths, aware of the history of the "Azad Hind government", which was formed by Netaji Subhash Chandra Bose to secure independence of India from the British.

Around 1,400 members of the 'sabha', including the Hindutva organisation's chief Mohan Bhagwat and 'sar karyavaha' (general secretary) Bhaiyaji Joshi, are taking part in the three-day event which began Friday.

RSS 'saha karyavah' (joint general secretary) Dattatrey Hosabale told reporters that a resolution to save the family system in India was passed at the meeting.

"The world has learnt family system and values from India but due to social change it is crumbling. Joint families have given way to nuclear ones and the number of old age homes have swelled in India.

"Disrespect to parents has grown and crime has crept into families. To ensure that the family system, an important social fabric in India, remains intact, the meeting passed a resolution," he said. Hosabale said the RSS is working for consolidation of the family system for the last couple of years under which a family stays connected with five other families.

Referring to the formation of the "Azad Hind Sarkar" by Subhash Chandra Bose in 1943 to overthrow the British, Hosabale called for organising events to spread awareness about this glorious episode in history.

Seventy-five years have been completed after the formation of the 'Azad Hind Sarkar' in exile by Subhash Chandra Bose on October 21, 1943, which was an important event in the attainment of freedom for Bharat, he said.

"After Netaji assumed leadership of the Azad Hind Sena, a formal government was established at Singapore following which war was declared against the British, This was an important step in view of international law," Hosabale added.

He hailed various steps being taken by the Central government in "recognising" the contribution of the Azad Hind Sarkar.

"We appeal to all to organise events that will make the citizens of the country, especially youths, aware of this inspiring and glorious history," he said.