It took  36 hours for the food artist to prepare the three colossal idlis weighing 107 kilograms in total. 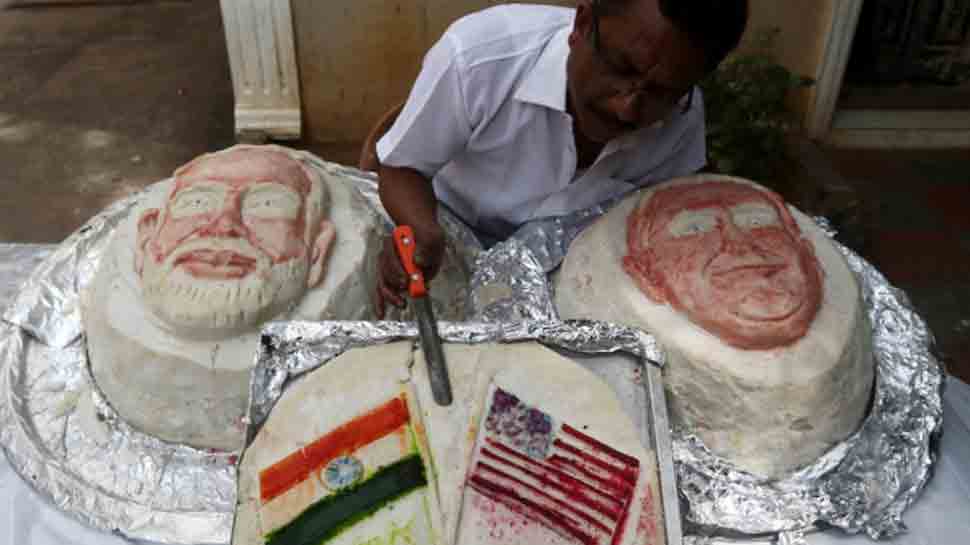 Chennai: As a welcoming gesture to US President Donald Trump, Tamil Nadu Chef-prepared 100-kilo idlis with the picture of Prime Minister Narendra Modi and Donald Trump painted in it. Along with the two idlis weighting 50-kilos each, the food artist also made other seven-kilo idli painted with the flags of both India and the US.

It took 36 hours for the food artist to prepare the three colossal idlis which weight 107 kilograms in total.

President Donald Trump arrived in India on February 24 for his two-day maiden visit here. Trump was received by PM Modi as he landed at Ahmedabad's Sardar Vallabhbhai Patel International Airport after which both of them attended the grand event 'Namaste Trump' at Motera stadium which is the world largest cricket stadium.

After his grand event at Ahmedabad, US President along with First Lady Melania, daughter Ivanka and son-in-law Jared Kushner and a high-level delegation visited Agra where he was welcomed by UP CM Yogi Adityanath and Governor Anandiben Patel. Several artists perform, students waved flags in the streets to greet and welcome the US President in Agra.

US President wrote in the visitors' book and jointly signed it with the First Lady, "The Taj Mahal inspires awe, a timeless testament to the rich and diverse beauty of Indian Culture!' Thank You, India."

Trump will meet President Ram Nath Kovind at the Rashtrapati Bhavan in the national capital at 7:30 pm before leaving for the United States by his special flight on the night of February 25.