Mehbooba Mufti calls local terrorists 'sons of soil'; says Centre should engage with them for peace in J&K

The PDP chief, however, said that it was "too early (for talks with terrorists)". 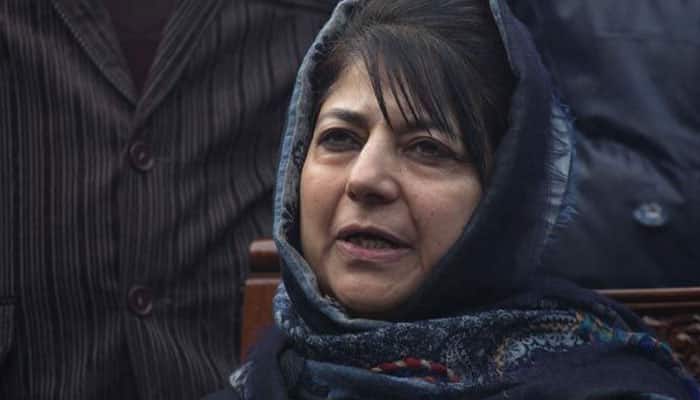 SRINAGAR: PDP chief and former Jammu and Kashmir chief minister Mehbooba Mufti on Tuesday hailed the local Kashmiri terrorists as "sons of soil" and said that sincere attempts should be made to save them.

The PDP chief also appealed to the Centre to engage with the local Kashmiri terrorists to end the "gun culture" in the terrorism-hit state.

"Right now, talks should be held with Pakistan and separatists. Similarly, the terrorist leaders should also be called for talks as it is they who have the guns and only they can end the gun culture," she told reporters in Anantnag after a party function.

PDP Chief and former J&K CM Mehbooba Mufti: I've always said that the local militant is the son of the soil. Our attempts should be to save him. I believe, in Jammu and Kashmir, not only Hurriyat but those with the guns should also be engaged with, but not at this time. pic.twitter.com/zMcMGp3jda

"I believe at some stage, talks will have to be held with Hurriyat Conference and terrorists as well," she said.

The PDP chief, however, said that it was "too early (for talks with terrorists)".

Mehbooba said it was everyone's duty to prevent local terrorists from walking on the path of violence.

"Right from the time I came into politics in 1996, I have been saying that local terrorists are sons of the soil and our maximum efforts should be to save them because they are assets. If an encounter breaks out, the two people (terrorists and security forces) come face to face and no one can do anything about it then," she said.

The PDP president had on Monday questioned the timing of filing of chargesheet in the 2016 JNU sedition case, in which seven Kashmiris have been named, saying the students were being used to score political points ahead of Lok Sabha elections.

"No surprises here. We are months away from the 2019 general election and like always, using Kashmiris to score extra political points with the Indian electorate has become somewhat of a pre-requisite," she had said in a series of tweets.

"Timing of the charge sheet couldn't be any more suspicious. When UPA was in power, it decided to send Afzal Guru to the gallows and to this day, J&K is paying a price," she said.