The Congress accused the BJP of destabilising the Karnataka government, a charge denied by it. 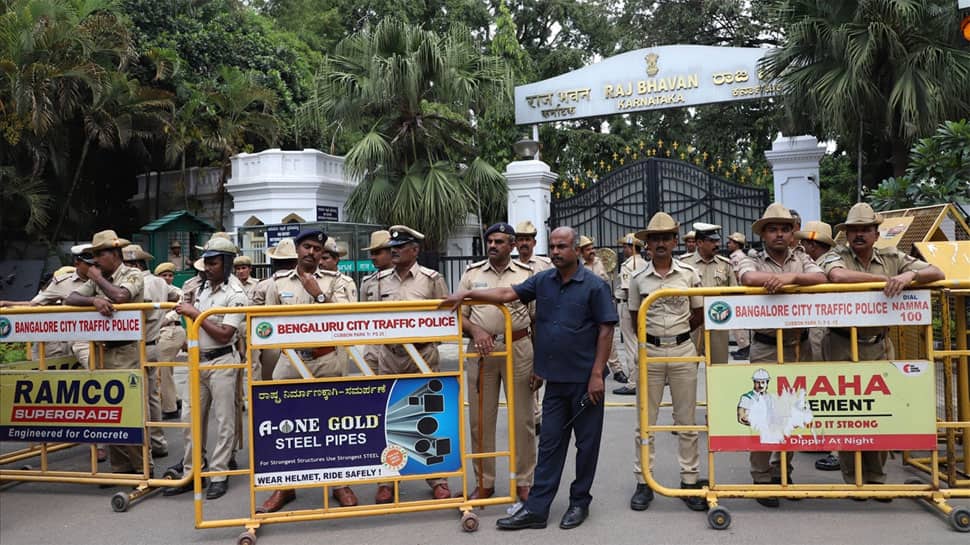 Security beefed up outside Raj Bhawan in Bengaluru (Photo: IANS)
Share:
Written By:

BENGALURU: The fate of the Karnataka coalition government is likely to be sealed Tuesday after Assembly Speaker Ramesh Kumar takes a final call on the resignation of the rebel Congress and Janata Dal (Secular) MLAs. The political crisis in the state further deepened on Monday night after two Independent MLAs – R Shankar and H Nagesh – resigned from Chief Minister HD Kumaraswamy's cabinet and pledged their support to the BJP. Twenty-one Congress and nine JD(S) ministers decided to resign ‘voluntarily’ Monday to accommodate the disgruntled MLAs and save the Congress-JDS coalition government in the state.

The Congress accused the Bharatiya Janata Party of destabilising the Karnataka government, a charge denied by the saffron party. “BJP is doing Horse Trading of our MLA's which is unconstitutional and dirty politics,” said Congress in a statement. To protest against it, the Karnataka Pradesh Youth Congress Committee (KPYCC) will launch a padayatra (foot march) on Tuesday. The march will begin at 11.15 am from Cubbon Park Metro Station to Rajbhavan, where party members will meet and submit memorandum to Karnataka governor “to stop Devil Acts of BJP and safeguard the democracy in Karnataka.”

With the resignation of the two Independent MLAs, the strength of the ruling coalition has come down to 103, while the BJP has 105 MLAs on its side. Staring at a political crisis, the Congress made all its 21 ministers resign from the government to pave the way for Cabinet reshuffle so that the disgruntled MLAs can be accommodated. The JD(S) also made its ministers follow suit. “All JD (S) ministers have resigned, like the 21 Congress ministers who had resigned," tweeted the CMO from its official Twitter account.

There was no word from the rebel camp of 14 MLAs on the move to reshuffle the Cabinet in a bid to save the wobbly 13-month-old government. Kumaraswamy, who returned from the US on Sunday, told reporters he had "no fear" about the happenings and was concentrating on fulfilling his responsibilities

By Monday evening, 14 rebel MLAs – including 10 from Congress, two from JDS and two Independents – left for Goa from Mumbai. The president of Mumbai unit of Bhartiya Janata Yuva Morcha, Mohit Bhartiya, accompanied these MLAs from Mumbai to Goa.

Meanwhile, former Karnataka CM and BJP leader BS Yeddyurappa said that his party now has the support of 107 MLAs and CM Kumaraswamy must resign because he has lost the majority. BJP has already made it clear that Yeddyurappa will be the party's CM candidate.