We are not safe: Kerala nuns write letter to CM Pinarayi Vijayan, plead for help

The four Kerala nuns have written a letter to CM Vijayan against their transfer orders. 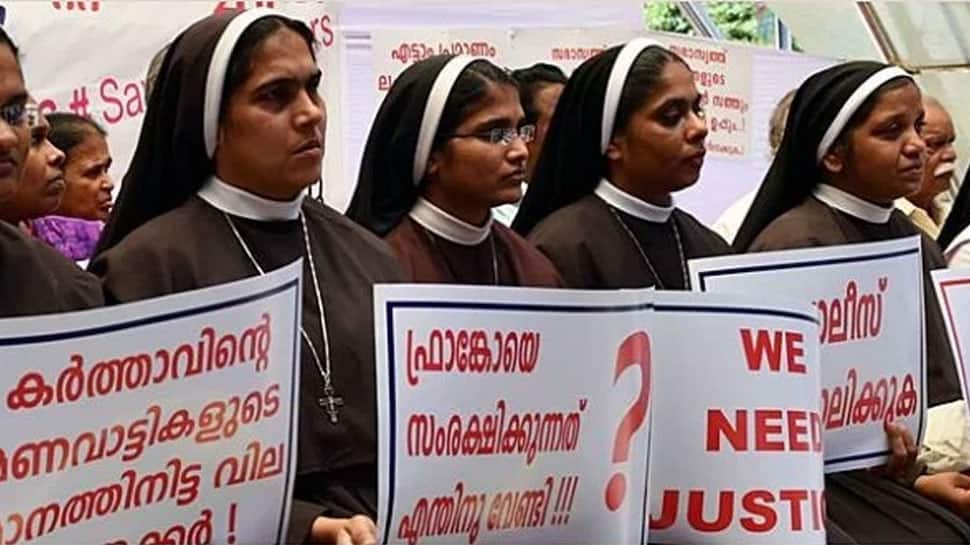 File Photo of protests by Kerala nuns
Share:
Written By:

KOCHI: In yet another twist to the Kerala nun rape case, four nuns, who took part in a protest demanding the arrest of rape-accused Bishop Franco Mulakkal, have written to the Chief Minister Pinarayi Vijayan, raising concerns regarding their safety.

According to news agency ANI, in their letter to the Kerala CM, the nuns had sought his urgent intervention to ensure that they are not transferred till the trial of the case gets over.

The nuns wrote the letter to the Kerala CM after they were directed to leave their convent in Kottayam district, in compliance with a transfer order issued by their congregation last year.

The nuns from Kuravilangad convent, including the victim have written to Kerala Chief Minister Pinarayi Vijayan asking him to intervene and ensure that they live in the present convent& are not transferred. They also said that the Bishop is very powerful and can sabotage the case

The survivor nun has also written a separate letter to the state's Chief Minister, seeking his help in the matter.

"Their aim is to single me out and to harass and torture me. My life will be in danger if such a situation arises," she has alleged in her letter.

Their congregation - Missionaries of Jesus under the Jalandhar diocese of the Roman Catholic Church - has directed the nuns to join their previously-assigned convents, according to the transfer orders issued between March and May, 2018.

The five of the four nuns - Alphy, Anupama, Josephine and Ancitta - were served notice by the superior general of the congregation, Regina Kadamthottu, urging them to take up their assigned responsibilities as befitting members of the Missionaries of Jesus congregation.

Meanwhile, Sister Nina Rose, who also fought for justice for the rape survivor nun, has not been asked to leave the convent.

While Sister Alphy has been transferred to a convent at Pakartala in Bihar, sister Ancitta and sister Josephine have been directed to join their convent in Lalmatia, Jharkhand.

Sister Anupama has been asked to report at a convent in Punjab.

In their letter to Vijayan, the nuns alleged that the transfer orders were aimed at splitting them and "to sabotage the case" against Bishop Franco Mulakkal.

Bishop Franco is supported by some of the church authorities and his henchmen, they alleged.

They are making false propagation and character assassination against us, the nuns alleged in their letter.

"The aim of the present transfer orders is to pressure and threaten us as all of us are prominent witnesses in the case," the four nuns said.

They claimed that their "fate of life" itself would be unpredictable if they were transferred to distant regions.

"They want to split us and put us into different locations in India. We will not be able to appear and give evidence before the court at the trial stage in such a situation," they said in the letter.

The nuns sought Vijayan's intervention to ensure that all of them could live at the St Francis Mission Home in Kuravilangad itself, with the survivor, till the trial of the rape case was over, especially considering their safety.

"The victim is actually living on the strength and support extended from our side. Our presence itself is a great solace for her, who is totally in a broken situation," they said.

Alleging that the transfer orders were a "strategy" to put all of them under pressure, the nuns said, "If the transfer is effected, we will not be in a position to give evidence in the case daringly."

"We will not be allowed to live peacefully and will collapse emotionally and mentally. Our lives will be in danger," they said.

The protest led by the nuns and the Catholic reformist forums here in September last year had led to a public outrage and demands for action against the bishop.

Bishop Mulakkal, a senior member of the Roman Catholic clergy in India, was arrested last year following allegations by the nun that he repeatedly raped and sexually assaulted her at the Kuravilangad convent between 2014 and 2016, a charge denied by him.

2 women attempt to trek to Sabarimala temple, return back to base after police warning