In a massive show of strength and intent, Amit Shah painted Kolkata saffron to showcase the support BJP enjoys here and in West Bengal.

Kolkata: Amit Shah on Tuesday took the electoral battle against TMC to Mamata Banerjee's bastion and held a massive roadshow in Kolkata ahead of final phase of voting in Lok Sabha election 2019.

Thousands of well-wishers and supporters of the Bharatiya Janata Party came out on the streets to greet party president Shah who repeatedly punched the air and showed the victory sign. "We have to revive democracy in West Bengal. Only this state has seen poll-related violence. People here are extremely angry with Mamata Banerjee and the support for us is for all to see here," he said. The roadshow began from Dharmatala after Kolkata Police had denied permission to the original starting point in Sahid Minar Maidaan, stating that BJP had tried to set up a stage here. The change in the starting point hardly dissuaded BJP workers and supporters from coming out in large numbers in what was a massive show of strength and intent. 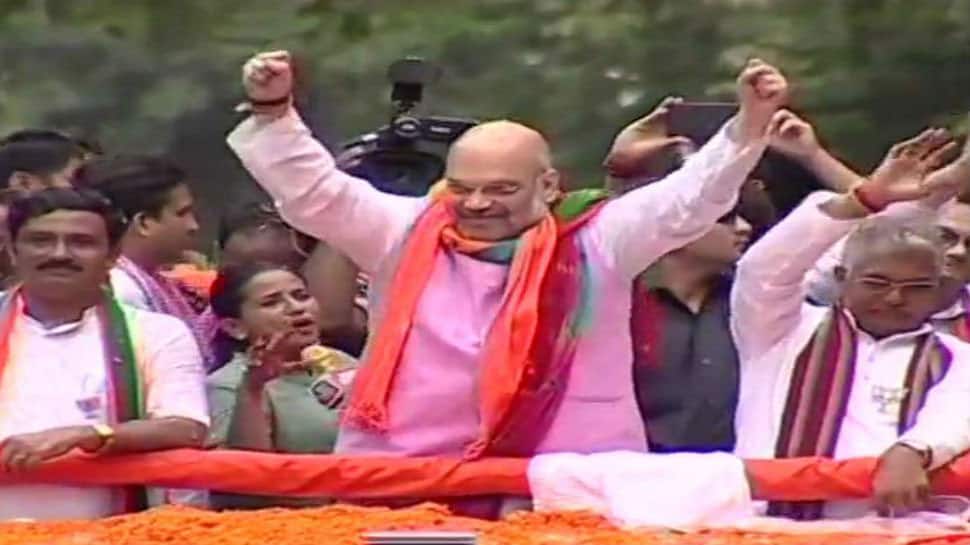 There were also reports of TMC workers allegedly throwing sticks at BJP supporters even as the roadshow progressed on its pre-planned route. (Full report here)

Flower petals rained on Shah through the entire course of the roadshow which proceeded to Esplanade, Lenin Sarani, Wellington Square, Boubazar, College Square, Amharst Street, Kali Badi and Swami Vivekananda's house on Simla Street. Shah, however, said he was unable to enter the house because of the ruckus created by TMC workers.

Kolkata appeared to have replaced the hues of blue and white - colours of TMC - with saffron through the entire course of Shah's roadshow. There were tableaus from 20 states accompanying Shah with cultural events organised at various points. Interestingly, one of the tableau also had people dressed as Lord Ram, Laxman and Sita. Chanting 'Jai Shri Ram' has been a major point of BJP's attack against TMC. Mamata had reportedly been angered when a group of people had chanted  'Jai Shri Ram' while she was en route an election rally earlier this month. This had prompted PM Narendra Modi to ask if chanting Lord Ram's praise was a crime. Shah too had dared Mamata to have him arrested for chanting  'Jai Shri Ram'.

Why is DIDI so upset with chants of JAI SHRI RAM & why does she call it "GALAGALI"? pic.twitter.com/dTrBqrS6Oo — BJP Bengal (@BJP4Bengal) May 4, 2019

Tensions have been high and Kolkata, earlier on Tuesday, had witnessed scenes of chaos when BJP alleged TMC workers had torn posters they had put up along the route of Shah's roadshow. "Mamata ji's goons and police removed all the posters and flags. They escaped soon after we reached here," Kailash Vijayvargiya, BJP national secretary, had told news agency ANI.

BJP and TMC have been engaged in an intense political tussle this election season with Mamata claiming that BJP would be unable to gain a foothold in West Bengal. BJP has countered by exuding confidence and pointing to Mamata's misrule in the state. Each of the six phases of voting in West Bengal has witnessed poll-related violence. Of the 59 parliamentary constituencies that vote in the final phase this Sunday, there are nine in West Bengal.