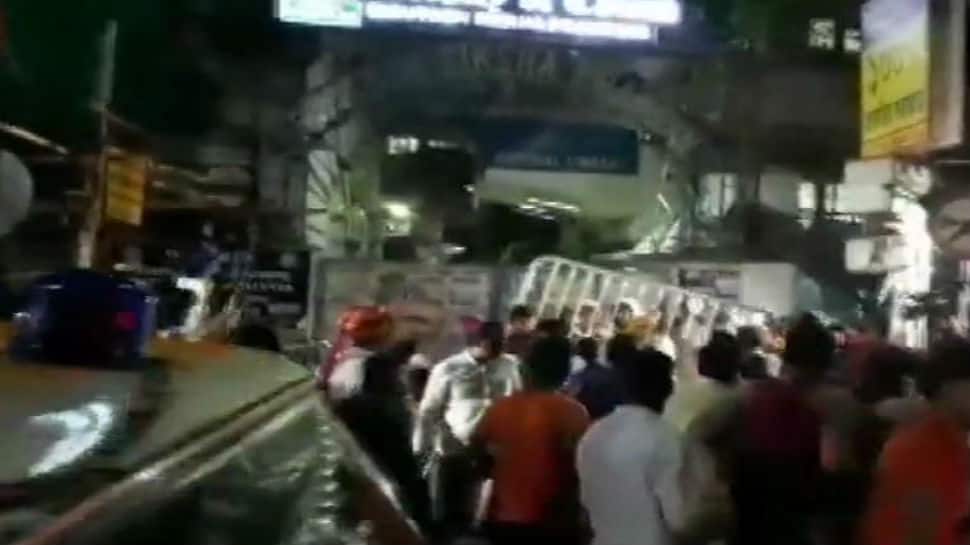 Kolkata: In a charged-up political atmosphere in Kolkata on Tuesday, Trinamool Congress workers clashed with supporters of Bharatiya Janata Party during Amit Shah's roadshow in the city.

Thousands had come out to greet the BJP president as he began his roadshow from Dharmatala in the afternoon. In what was a show of strength from the BJP, there were also incidents of clashes with TMC workers allegedly throwing sticks at Shah's truck. This was followed by the TMC workers clashing with supporters of BJP near College Square - one of the routes of the roadshow. It is reported that TMC student's wing had been holding black flags and anti-BJP placards here which were questioned by BJP supporters. This led to clashes with many resorting to throwing stones and using lathis to damage BJP hoardings along the route of the roadshow. Some of them even resorted to damaging public property and at least two vehicles were set ablaze.

While TMC has said that BJP supporters who began the commotion, the counter-charge is that TMC workers were using violent means to undermine the roadshow. Kolkata Police eventually resorted to lathi charge to bring the situation under control. Amit Shah, however, blasted the state government for indulging in violence and accused it of deliberately trying to disrupt the roadshow. "The attack was carried out by TMC workers, they carried out arson," he told Zee News. "Mamata is frustrated as she is fearing defeat. This is a step taken because of their frustration." (Full report here)

This is not the first time that supporters of the two parties have clashed although Kolkata has so far not seen incidents of violence.

Shah's roadshow in Kolkata is seen as BJP's final push to take the electoral battle to Mamata's bastion. Mamata, however, is confident of a strong TMC showing.