Political parties continued with their high-octave electioneering across the country on Friday. The fourth phase of the seven-phased Lok Sabha election will be held on April 29. 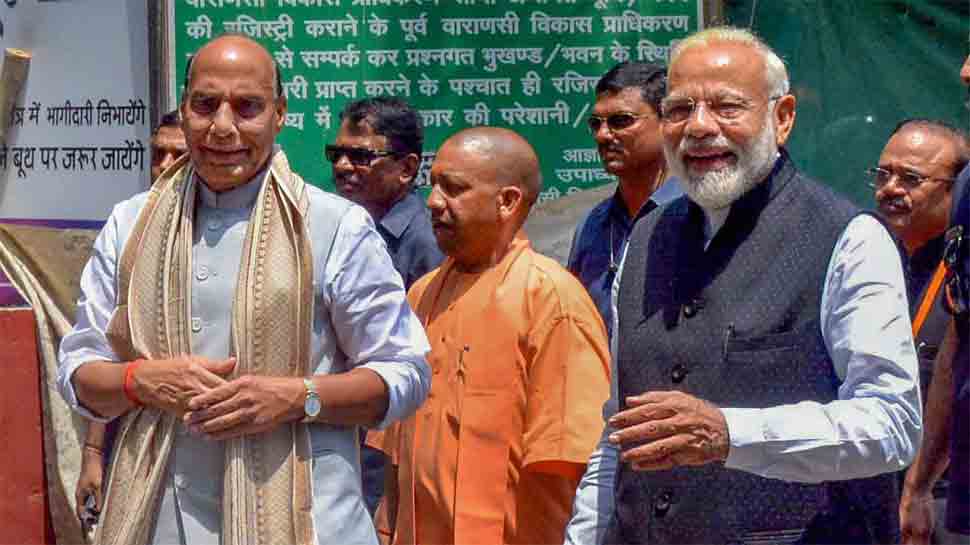 Apart from PM Modi, a slew of other leaders will filed their nominations on Friday, including SAD chief Sukhbir Singh Badal from Ferozpur, his wife Harsimrat Badal from Bathinda, BJP's Ravi Shankar Prasad and Ashwini Choubey from Patna Sahib Seat and Buxar respectively.

Here are all the election-related updates of April 26:

* PM Modi said opposition leaders are in a race to support Pakistan on the issue of military operations against terror camps in the neighbouring country.

* PM Narendra Modi at NDA rally in Mumbai: Once upon a time, telephone bill was a huge part in the list of expenses of the middle class. Due to the efforts of our government, calling is almost free, data in India is also the cheapest in the entire world.

PM Narendra Modi at NDA rally in Mumbai: Once upon a time, telephone bill was a huge part in list of expenses of middle class. Due to efforts of our government, calling is almost free, data in India is also the cheapest in the entire world pic.twitter.com/70iISBXGnv

* Andhra Pradesh Chief Electoral Officer Gopal Krishna Dwivedi, who has been accused by Chief Minister N Chandrababu Naidu's of 'exceeding his jurisdiction' in implementing the Model Code of Conduct, asserted that he was functioning strictly as per norms. "I will not react to what the Chief Minister wrote in the letter (to the Chief Election Commissioner). I will only implement the instructions issued by the CEC," Dwivedi said.

* BJP president Amit Shah said his party's policy is to reply with a bombshell if Pakistan fires a bullet, while the Congress just plays 'ILU-ILU' with terrorists. "Rahul Baba, you do Ili-Ilu with terrorists. We don't do that. Our policy is very clear. If a bullet comes here, a shell lands there," he said.

* The day when the entire country was cheering, distributing sweets, there was disappointment at two places. One, in Pakistan and the other, in Rahul Gandhi and company's office, says Amit Shah

* Narendra Modi is the only Prime Minister since 1996 who has been unable to conduct assembly elections in Jammu and Kashmir on time: Omar Abdullah

* Union Finance Minister Arun Jaitley on Friday took a dig at the Congress party, saying that India`s grand old party was contesting the 2019 election on 1971 agenda.

* Anurag Thakur, the BJP`s three-time MP from Hamirpur in Himachal Pradesh, on Friday filed his nomination papers and declared movable and immovable assets worth over Rs 5.54 crore.

* The Congress approached the Delhi Election Commission and filed a complaint against Chief Minister Arvind Kejriwal accusing him of giving communal and provocative statement in a bid to attract voters on communal lines and demanded the poll panel to bar him from campaigning.

* Congress President Rahul Gandhi on Friday called NYAY scheme a surgical strike on poverty as he took a dig at Prime Minister Narendra Modi for growing employment in the country.

* A Delhi Court on Friday sought an Action Taken Report (ATR) from Delhi Police on a criminal complaint seeking directions for registration of an FIR under section 124A (IPC-- Sedition charges) against Congress president Rahul Gandhi.

* The Congress party had no idea of the struggles faced by the poor people of the country as their money from the scams used to be deposited in Swiss banks, said Uttar Pradesh chief minister Yogi Adityanath.

* BJP writes to CEO seeking prompt action against Mamata Banerjee alleging that she violated the Model Code of Conduct by asking Trinamool Congress party workers to resort to violence to ensure its victory in Lok Sabha election.

* Remember how Congress people made fun of 'Swachh Bharat mission'. They didn't leave any chance to call the idea a small one. Whenever I used to pick the broom, they used to spend the entire day trolling me on social media, says PM Modi in Jabalpur

PM in Jabalpur, Madhya Pradesh: Remember how Congress people made fun of 'Swachh Bharat mission'. They didn't leave any chance to call the idea a small one. Whenever I used to pick the broom, they used to spend the entire day trolling me on social media pic.twitter.com/VEHVfyEAnZ

* Hisar MP Dushyant Chautala's mother and JJP MLA Naina Chautala launched a sharp attack on Sunita Duggal, the BJP candidate from the Sirsa Lok Sabha seat, terming her a "barsati mendak" (seasonal politician) who would not be seen once the polls are over.

* CPI(M) general secretary Sitaram Yechury drew a comparison between Hindu mythology characters Duryodhana and Dushasana and Prime Minister Narendra Modi and BJP president Amit Shah. "Out of 100 Kauravas, you just remember the name of two brothers Duryodhana and Dushasana. In the world`s biggest party, how many names do you remember? Modi-Amit Shah. What Kauravas faced in Mahabharata, the same situation is now panning out in political Mahabharat here," he said.

* Delhi court extends interim protection from arrest to P Chidambaram, Karti till May 6 in Aircel-Maxis case.

* Among all prime ministerial aspirants, who can really eliminate terrorism: Pm Narendra Modi.

* Shiromani Akali Dal chief Parkash Singh Badal upped the ante by comparing the battle between Prime Minister Narendra Modi and Congress president Rahul Gandhi to one between an elephant and ant. "People of India need to think who they want as their Prime Minister? Who can fight Modi in a battle? This Gandhi? That would be like a battle between an elephant and an ant. That will be the extent of difference between the two," he said.

* Odisha Congress chief Niranjan Patnaik and his son Navajyoti have emerged as the richest candidates in the fray for the fourth and final phase of twin elections in the state, according to a report.

* While greenhorn Navajyoti Patnaik, with a total asset of Rs 104 crore, was found to be the wealthiest among the 52 candidates contesting the Lok Sabha polls, father Niranjan Patnaik's figured on top of the list of 334 assembly election nominees with property worth Rs 60 crore.

* “People of India need to think who will be the next Prime Minister of India? Who can compete with Modi.. this (Rahul) Gandhi, it's like comparing an elephant to an ant,” says Shiromani Akali Dal patron and former chief minister of Punjab Parkash Singh Badal. Read more

* Sam Pitroda says it was Priyanka Gandhi own decision to not fight from Varanasi. Speaking in a press conference in Jaipur, Sam Pitroda said, "It is Priyanka ji's decision.She herself thought that there is a lot of responsibility. She thought that rather than concentrating on one seat, she should focus on the job she has at hand. So that decision was finally hers and she decided it."

* Congress game plan not to stop BJP, but come to power in UP in 2022: Akhilesh Yadav

*"I express my gratitude to the people for their love and blessings. A roadshow for such a long duration can only be done by the people of Kashi. Heartfelt thanks to the residents of Kashi and those who are voting. Voting is your right, election a celebration of democracy. Everyone should vote," says PM Modi to media in Kashi.

I thank our NDA family for joining us on this historic occasion.

* SC refuses to interfere in the EC order banning release of film on PM Narendra Modi till the end of last phase of voting on May 19. SC also dismisses plea by Modi Biopic Movie. SC accepts the report of Election Commission. SC says "We are not inclined to interfere".

*Rahul Gandhi's flight returns to Delhi after engine trouble, tweets the Congress chief. He informed that his rallies will be delayed. "Engine trouble on our flight to Patna today! We’ve been forced to return to Delhi. Today’s meetings in Samastipur (Bihar), Balasore (Orissa) & Sangamner (Maharashta) will run late. Apologies for the inconvenience," tweeted Rahul.

* PM Modi on his way to Collectorate's office along with his convoy to file nomination from Varanasi Lok Sabha Constituency.

* Andhra Pradesh CM N Chandrababu Naidu wrote to Election Commission on Thursday over the transfer of DG Intelligence, Chief Secretary and Superintendents of Police of various districts of the state and seeks directions to CEO not to interrupt functioning of the state government: ANI

* SP-BSP sacrificed seats in national interest, but Congress' agenda in LS polls is not to stop BJP from forming govt at Centre. Congress more keen on forming UP govt in 2022, rather than halting BJP: Akhilesh Yadav to PTI

* This election is not a fight, but a celebration of democracy: PM Modi

* You're responsibility is to win your polling booth: PM Modi

* “Today everyone from Kashmir to Kanyakumari is excited and looking forward to participating in this festival of democracy. There is again a wave in India which echoes- ‘Phir ek baar, Modi sarkar’…”: PM Modi

* I too was a karyakartas once. I also had the privilege of putting up posters on walls: Modi in Varanasi

* "I always say SP is 'Samapt Party' and BSP 'Bilkul Samapt Party'. You've already worked towards finishing off Congress party in Uttar Pradesh. They are breathing through two seats - Amethi & Raebareli but this time there will be 'Lotus' on both of them,"says Uttar Pradesh Deputy Chief Minister Keshav Prasad Maurya.

* West Bengal: The Election Commission will deploy 580 companies of central forces to cover 100 per cent of election booths in the state during the fourth phase of polling. "We expect this will enable us to cover as many as 100 per cent of the polling stations by central forces," the Election Commission official told PTI. On Monday, eight Lok Sabha constituencies in the state - Baharampur, Krishnanagar, Ranaghat, Bardhaman Purba, Bardhaman-Durgapur, Asansol, Bolpur and Birbhum will go to polls.

* Political parties will continue with their high-octave electioneering across the country. The fourth phase of the seven-phased Lok Sabha election will be held on April 29.

PM Modi will address two rallies in Madhya Pradesh's Sidhi and Jabalpur while Congress chief Rahul Gandhi will campaign in Bihar's Samastipur. Both the leaders will also address public meetings in Maharashtra. While PM Modi will address a rally at Bandra-Kurla Complex (BKC) in Mumbai on Friday evening while Rahul will speak at Sinnar in Nashik district around the same time. PM Modi will be accompanied by Shiv Sena Chief Udhav Thakre in BKC rally. BJP's Amit Shah will hold a roadshow in Rajasthan's Jodhpur, Raghubar Das will hold a rally in Jharkhand's Dumka while Bihar Deputy Chief Minister Sushil Modi will rally in Bihar's Lakhisarai and Darbhanga.

We responded to terrorists in their own language: PM Narendra Modi in Varanasi