Lok Sabha election then and now: What Congress promised in 2014 vs promises of 2019 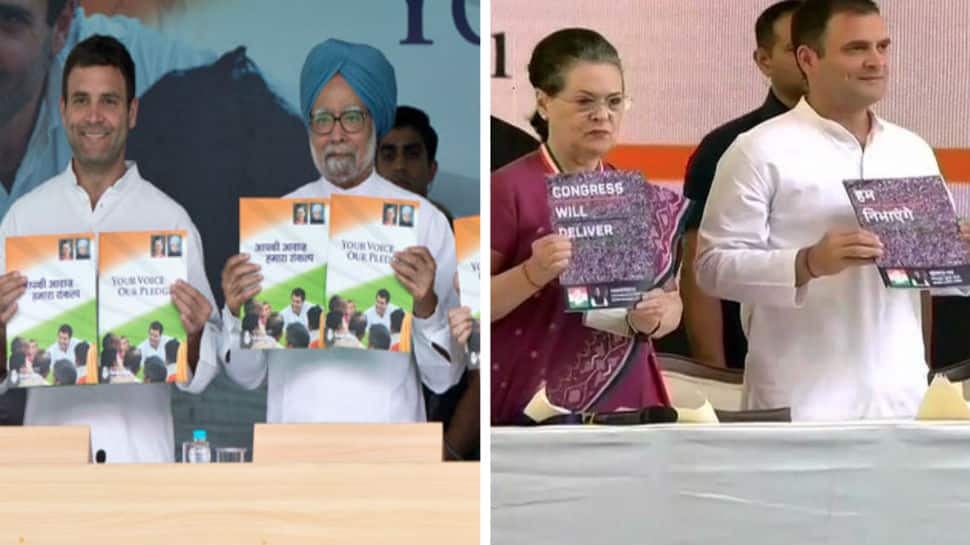 New Delhi: Rahul Gandhi led a number of key Congress leaders on Tuesday and released the party manifesto in yet another bid to woo voters and win power.

Rahul was joined at the party headquarters by former PM Manmohan Singh, Sonia Gandhi, P Chidambaram, AK Antony, Randeep Surjewala and - now in a political role - Priyanka Gandhi Vadra. While the party president had already outlined how its NYAY scheme would highlight its manifesto for Lok Sabha 2019 election, Rahul once again elaborated on how Congress is committed to the cause of removing poverty from the country.

Fighting poverty has been a Congress promise for decades. 'Garibi Hatao' was a poll promise of Indira Gandhi and 'Garibi Mitao' has become synonymous with Congress' election strategy in recent years as well. Before the 2014 Lok Sabha election, Congress had played hard at projecting itself as a party devoted to upliftment of the economically marginalised.

Here are some of the highights of Congress manifesto from 2014 and 2019:

'Your Voice Our Pledge'

Congress had claimed in its manifesto before the 2014 Lok Sabha election that it is a party that remains committed to the cause of the people. Despite massive corruption charges against some of its leaders, the party maintained that jobs - 100 million - would be created, subsidy would be given to the deserving, export taxes would be done away with, growth rate of 8 per cent within three years, introduction of GST within 100 days of returning to power, fiscal deficit of 3 per cent by fiscal 2017 and $ 1 trillion investment in infrastructure.

On Tuesday, Rahul once again made promises galore and said the Congress manifesto will look out for the poor, youth and other sections of the society. "Money for poor, money for farmers," he said.

The manifesto promises that Congress would fill 22,000 government jobs, assure employment in gram panchayats for 10 lakh youth, ensure no permission is required for entrepreneurs for three years, a guarantee of 150 days of MGNREGA, separate farmer budget and ensure that defaulting on farm loans won't be a criminal offence but a civil offence. The manifesto also says that six per cent GDP would be for education and that the poor would have access to high-quality medical facilities.

Congress' manifesto is also based on the following key pledges:

* Quality Education For Every Child

These and many others are lofty promises made by Congress for the upcoming election. Will 900 eligible voters choose to put their faith in the party and its promises or will they once again reject Congress? May 23 - counting day - will reveal.