With just two days to go for the counting of votes for the 2019 Lok Sabha election, the leaders of BJP-led NDA appear confident of their victory and have started making plans for the future, while a jittery opposition, which is back to blaming EVMs, is busy holding parleys to chalk out a post-poll strategy. 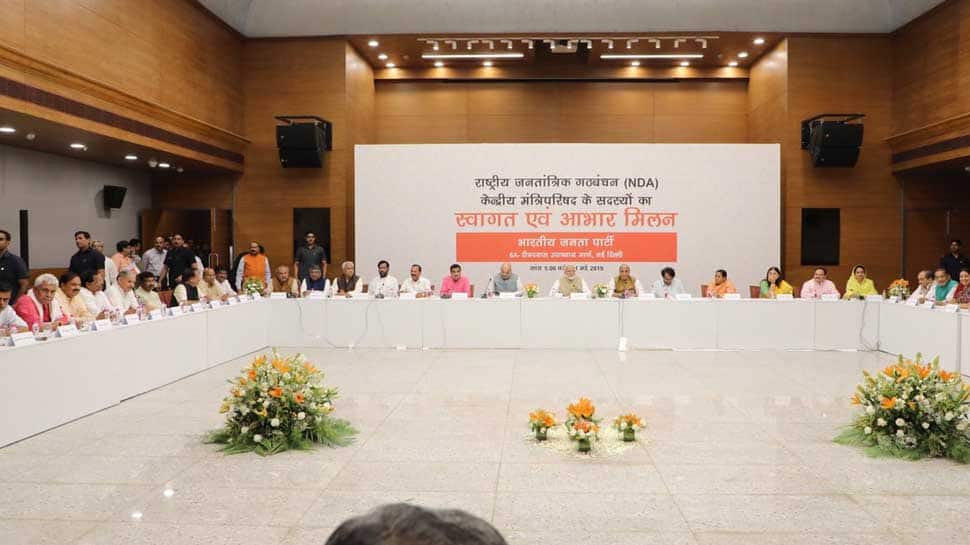 NEW DELHI: With just two days to go for the counting of votes for the 2019 Lok Sabha election, the leaders of BJP-led NDA appear confident of their victory and have started making plans for the future, while a jittery opposition, which is back to blaming EVMs, is busy holding parleys to chalk out a post-poll strategy.

Earlier in the day, a delegation of 22 Opposition parties met the Election Commission officials and raised concerns over alleged manipulation of the EVMs used during the polling.

The Opposition leaders also submitted a memorandum to the EC and said that they represented "the voice of 70 per cent of the electorate in the country."

The Opposition leaders demanded that VVPAT slips at randomly selected five polling booths should be counted first, and if any discrepancy occurs, then VVPAT slips should be tallied for the entire assembly segments.

The delegation also raised concerns over reports about EVMs being "replaced" at various places.

"All the VVPATs should be counted at the beginning. If there are any discrepancies, total VVPAT (voter verified paper audit trail) of the entire assembly segment should be counted," Telugu Desam Party (TDP) president and Andhra Pradesh Chief Minister N Chandrababu Naidu told reporters after meeting the EC officials.

Naidu, who has been spearheading the opposition's campaign against the EVMs and to stitch a non-BJP front, asked what problem did the Election Commission have in implementing their suggestions.

On his turn, Congress leader Abhishek Manu Singhvi said that the suggestions of the Opposition parties were "no brainer" and they were a part of their memorandum submitted to the commission a month ago.

"In last one and a half months, we have raised these issues with other opposition parties. There is nothing to disagree. It is a small, simple measure, which is a confidence-building measure. They (EC) have assured us that they will meet tomorrow (Wednesday) and discuss our suggestions," he said.

Singhvi added that the ''the EC did not have to change even a rule. It is merely a change of guidelines, the procedures that you count first."

Congress leader Ghulam Nabi Azad informed that the EC was apprised of reports about the replacement of EVMs. "All political parties spoke about how EVMs were found in private vehicles near the strong rooms. Also, we told the officials how votes would go to the BJP when it was actually given to a candidate from the different party," he said.

The opposition parties said that they will decide the next course of their action if the EC refused to accept their demands.

The Election Commission, however, said that it would discuss the issue on Wednesday.

While the opposition kept holding parleys, the Union Council of Minister of the Narendra Modi government met on Tuesday. It was followed by a dinner hosted by BJP chief Amit Shah for the NDA allies on the successful completion of five years of the Modi government at the Centre.

Ahead of the dinner, PM Modi congratulated his Council of Ministers for successfully working as a team for the last five years. PM Modi said that the election was like a ''pilgrimage'' for him.

The 2-hour long meeting was attended by all the ministers, who on their part congratulated PM Modi for the development works that the government did in the last five years under his leadership.

Later, during the dinner at Delhi's Ashoka Hotel – the leaders of NDA passed a resolution which pledged to make a strong, developed and inclusive India by 2022 when India completes 75 years of its independence. The resolution was proposed by BJP ally and Union minister Ram Vilas Paswan.

During the dinner, the PM expressed concern over the "needless controversy" created by the Opposition over EVMs even as the ruling alliance laid out its agenda for the next five years if it is elected to power again. In his address, PM Modi stressed on the need to change the narrative from caste lines and orient it for the poor.