Joint opposition will approach the top court on the issue again, seeking counter checking of at least 50 per cent of the VVPAT slips to ensure transparency in counting of votes. 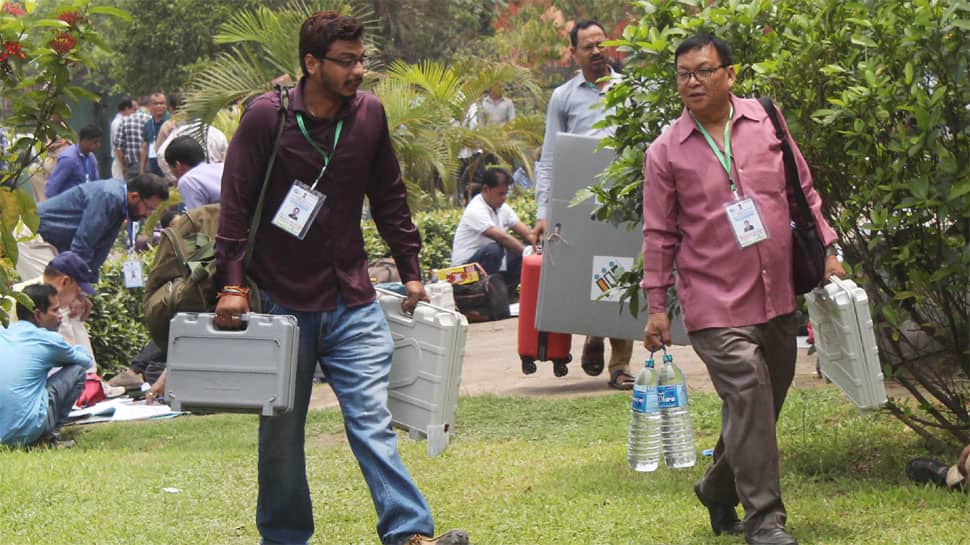 Polling officials leaves after collecting EVM and other election material ahead of the third phase of 2019 Lok Sabha elections, at a distribution centre, at Maniram Dewan Trade Centre in Guwahati on Monday. ( ANI Photo)

Alleging that EVMs are vulnerable to "hacking and programming errors", TDP chief Naidu on Tuesday said, “We have serious doubts about EVMs. I am a strong supporter of technology. But today, technology is very vulnerable. Every six months technology is changing. There are also technical problems, vulnerability and also malfunctioning. Only three countries out of the ten most populous countries in the world use EVMs. These countries are also not technologically strong."

He further said that Russian hackers could be involved and urged the Election Commission (EC) to check all polling machines after elections. NCP president Sharad Pawar said while citizens are in a mood to change the Modi-led government, manipulation of EVMs is the "only worrying factor".

"Our only worry is someone misusing this technology to manipulate elections...Our worry is manipulation through these machines," Pawar said.

Samajwadi party chief Akhilesh Yadav also alleged that EVMs in several areas were recording “votes in favour the BJP” amid reports of glitches.

“EVMs across India malfunctioning or voting for the BJP. DMs say poll officials untrained to operate EVMs. 350+ being replaced. This is criminal negligence for a polling exercise that costs 50,000 crs,” the former chief minister of Uttar Pradesh tweeted.

EVMs across India malfunctioning or voting for the BJP. DMs say poll officials untrained to operate EVMs. 350+ being replaced. This is criminal negligence for a polling exercise that costs 50,000 crs.

Should we believe DMs @ECISVEEP, or is something far more sinister afoot? pic.twitter.com/eGsGUUBWai

EVM malfunction was reported from polling booths in Kerala, Uttar Pradesh, Bihar and Goa during the third phase of Lok Sabha Election on Tuesday.