There are 28 Lok Sabha seats at stake in Karnataka, out of which the BJP currently holds 16 seats, while the Congress and the JDS hold 10 and two seats, respectively. 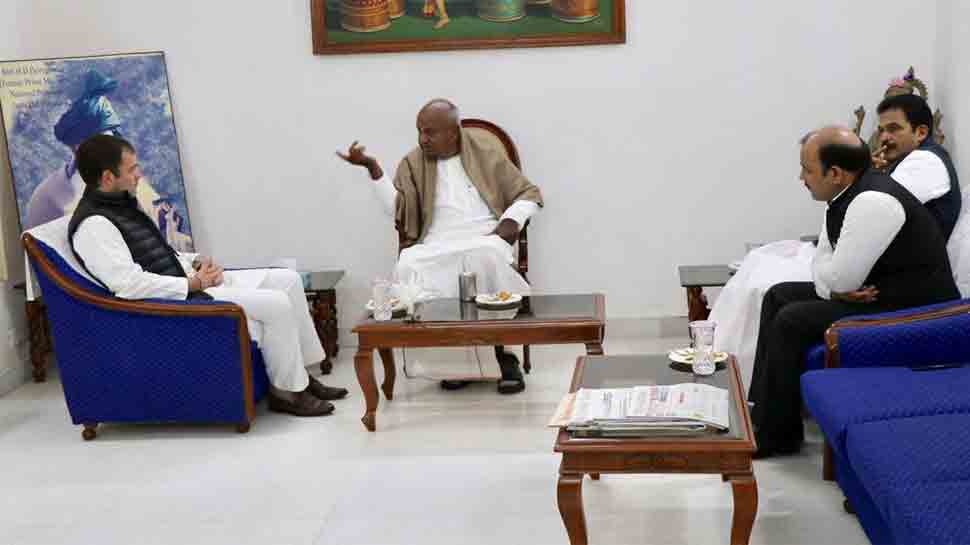 At the meeting, Gowda demanded the Congress chief to give his party at least 10 seats to contest in the upcoming general assembly elections in the state. "Gandhi discussed about seat sharing in Karnataka. This is the first such discussion between the two parties. There are 28 Lok Sabha seats in the state. Earlier, I had asked for 12. At the meeting, I requested Rahulji to give at least 10 seats to the JDS," Gowda told reporters.

"Rahul will take the final decision after taking inputs from Ali and Venugopal," he said.

The seat-sharing arrangement is expected to be announced by March 10.

"At the meeting, the two leaders discussed the prevailing political situation in the country, opposition unity and pre-poll alliance in Karnataka. The Congress would contest two-thirds of the seats and the rest are for the JDS. Seat wise, we have to discuss and finalise. We are going to reach a decision shortly and will announce it by March 10," he said.

On March 3, Deve Gowda had said that they had agreed to join hands with the Congress to revive secular forces."The two parties will finalise seat-sharing very soon," JDS general secretary Danish Ali said.

There are 28 Lok Sabha seats at stake in Karnataka, out of which the BJP currently holds 16 seats, while the Congress and the JDS hold 10 and two seats, respectively. The seats, which have become a bone of contention for Congress and JDS, are in Mysuru region. JDS has staked a claim for 12 seats, but the Congress does not want to give more than nine seats, said earlier reports.

Ahead of Rahul-Gowda meeting,Ali has asserted said that the issue of seat sharing will be sorted out soon as the alliance is intact in Karnataka. "The two parties will contest the Lok Sabha polls together," he said.

Earlier, on February 28, Chief Minister HD Kumaraswamy had said that if the Congress and JDS alliance won at least 20-22 seats in the state, then a Kannadiga could once again become the next Prime Minister of the country.

"Many formulae are on the table. Our main motive is how we should defeat the BJP on the maximum number of Lok Sabha seats. How we should cut down the BJP’s strength from Karnataka is the common goal for Congress and JDS," he told media persons after the meeting in Bengaluru.

"We are discussing each and every seat. We will take care of the aspirations of each other while finalising the seats we will contest. However, the final decision will be taken by Congress and JDS presidents," he said.

Former Chief Minister and Congress leader Siddaramaiah said that the final decision on seat-sharing would be announced soon. "We have had good discussions. We are going in the right direction. In a few days, we will give the final picture," he said.

Former Prime Minister Deve Gowda had on Sunday said that they had agreed to join hands with the Congress to revive secular forces.