At least 150 passengers from first local going from CST to Karjat have been rescued by the Railway staff. Around 100-120 people are still stuck inside the train. 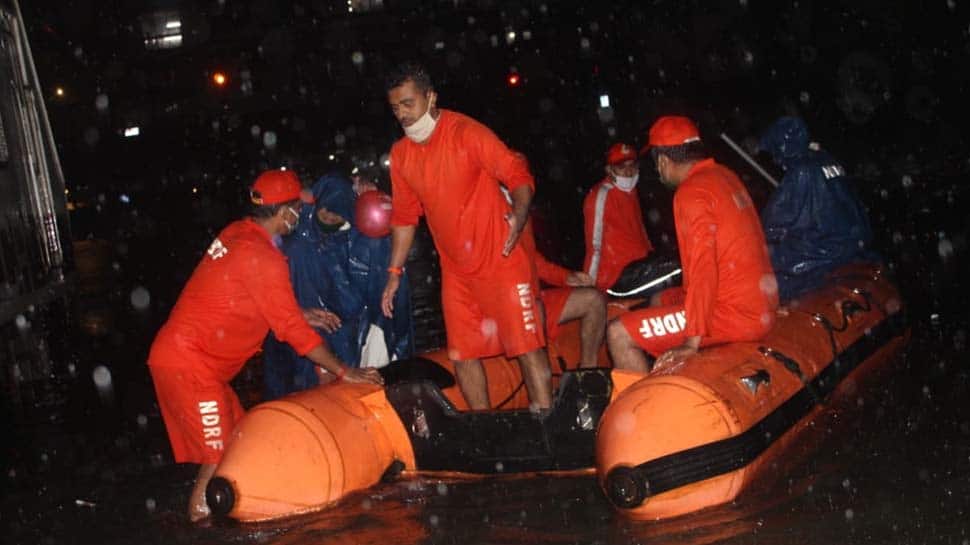 As heavy rains lashed Mumbai on Wednesday, the city witnessed water-logging in several areas and also on railway tracks causing two local trains to halt midway. Two local trains were stuck at the Masjid railway station in Mumbai with over 200 passengers.

At least 150 passengers from first local going from CST to Karjat have been rescued by the Railway staff. Around 100-120 people are still stuck inside the train. Another local, which was on its way from Karjat to CST was stuck at about 60 metres from Masjid station which may have 50-60 passengers. The water is about 2.5 to 3 feet deep.

The National Disaster Response Force (NDRF) rushed to the spot and started rescue operations. Taking to micro-blogging site Twitter, the NDRF said that as of 11 pm, 55 passengers were rescued.

Extremely heavy rains will continue to batter Mumbai and neighbouring areas until Thursday morning, the IMD said in a special bulletin.
On Wednesday, incessant heavy rainfall and strong winds battered Mumbai and neighbouring Thane and Palghar districts, disrupting suburban train and bus services. Three high-capacity cranes deployed at the Jawaharlal Nehru Port Trust in Raigad district collapsed due to gusty winds in the afternoon, but there was no casualty, an official said.

From 8.30 am to 5.30 pm, extremely heavy rainfall (above 20 cm) lashed parts of Mumbai. Colaba recorded 22.9 cm while Santacruz recorded 8.8 cm of rainfall, according to the India Meteorological Department. Wind speed reached 70 kmph and gusted at 107 kmph between 5 pm and 5.15 pm in Colaba.

"Strong winds with speed reaching 70 kmph along and off the Mumbai and adjoining Konkan coast likely to continue till 6th morning and gradually reduce thereafter. Extremely heavy rainfall is also likely to continue over Mumbai tonight and reduce from tomorrow 6th August," the special bulletin said.