The three parties are likely to make a formal announcement once a broad consensus is reached on the power-sharing in Maharashtra and the common minimum programme for the Shiv Sena-NCP-Congress government. 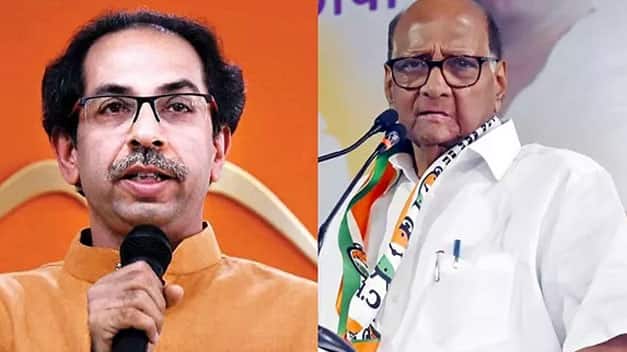 MUMBAI: Even after the imposition of President's Rule in Maharashtra, efforts are underway to end political uncertainty in the state with the sources claiming that the NCP, Shiv Sena and Congress have agreed on a power-sharing deal.

Sources told Zee Media on Wednesday that Sharad Pawar's NCP and Uddhav Thackeray-led Shiv Sena have arrived at a consensus on ''50-50 power-sharing formula'' in Maharashtra.

The two sides have reportedly agreed to share the chief ministerial position for 2.5 years each, while the Congress – the third partner in the power-sharing deal – has settled for the post of deputy chief minister for five years.

However, no agreement could be reached on the Maharashtra Assembly Speaker's post, discussions for the same are underway.

The three parties are likely to make a formal announcement as soon as a broad consensus is reached on the power-sharing deal in Maharashtra and the common minimum programme for the Shiv Sena-NCP-Congress government in the state.

Shiv Sena had earlier sought support from Pawar's NCP and the Congress, severing its 25-year-old old ties with the BJP after the saffron party rejected its demand for rotational chief ministership and 50-50 power-sharing agreement.

The Nationalist Congress Party (NCP) and the Congress had earlier said that they will make an announcement after detailed discussion on the political deadlock in Maharashtra. The two parties maintained that it will take time for them to firm up a working relationship with the Shiv Sena.

"We are in no hurry. We will hold discussions with Congress and then take a decision to support Shiv Sena," NCP chief Sharad Pawar had said.

It may be recalled that the BJP, despite emerging as the single-largest party in Maharashtra, has declined to form the government since its lacks majority in the 288-member Maharashtra assembly, while the Shiv Sena has so far failed to give a letter of support to the state's Governor Bhagat Singh Koshyari.

As the political logjam continued, Koshyari recommended the imposition of President's Rule in Maharashtra, which was later approved by President Ram Nath Kovind on Tuesday.

Reacting to the political crisis in the state, Sena chief Uddhav Thackeray had said that the BJP is still contacting him through unofficial channels to join hands to form the government in Maharashtra.

"They keep making vague and different offers each time. But we have decided to go with the Congress-NCP combine," he had claimed.

His party on Wednesday blamed its former NDA ally BJP for the present political deadlock in Maharashtra, saying the Governor's recommendation for President's Rule is an insult to the mandate given to the two parties by the voters of the state.

The Shiv Sena also termed the Governor's decision as ''unconstitutional and unreasonable.''

In an editorial in its mouthpiece Saamana, Shiv Sena said that the Governor was “expected to show some independent thinking”.

The strongly-worded Saamna editorial also accused the BJP of not honouring the 50-50 power-sharing deal, which was reportedly agreed between the two parties before the assembly election in Maharashtra.

Attacking the BJP, Sena article said had the former respected and honoured the power-sharing deal, the situation in Maharashtra would have been different.

The Saamana article also accused the BJP of conspiring to defame Shiv Sena and said that the party seems to be enjoying after pushing Maharashtra into a state of political instability.

Hitting out at the BJP, the Sena editorial said, ''though horse trading hasn't yet begun in Maharashtra, President’s Rule is a step in that direction”.

Accusing the BJP of adopting ''double-standards'', the Sena article sought to know if the saffron party followed its principles and the constitutional provisions while dealing with PDP chief Mehbooba Mufti in Jammu and Kashmir and Nitish kumar in Bihar.