Recurrent use of tablets, mobile phones and hand-held games, are the primary cause behind the rise of muscoskeletal problems in children. 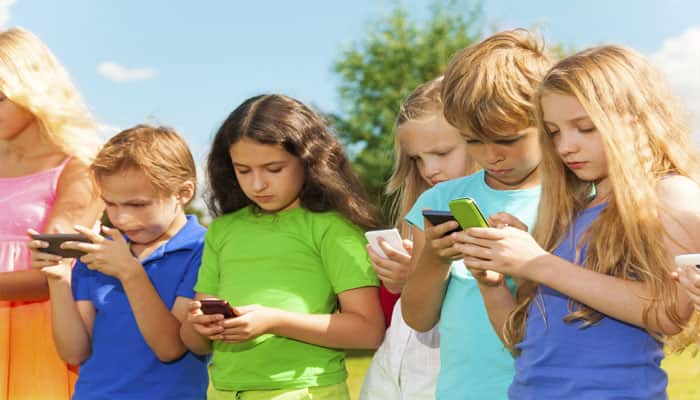 New Delhi: Technological advancement has taken the world by storm and we humans have become slaves to it. So much so, that it has kids as old as 3 years of age eating out of its hands.

By this, we mean the usage of the latest gadgets in the market like smartphones, tablets, et al.

This habit is having an adverse effect on children's health, as doctors have started pointing out that small children queue up outside their clinics complaining of back pain, eye problems, etc., triggered by the excessive use of gadgets.

Recurrent use of tablets, mobile phones and hand-held games, are the primary cause behind the rise of muscoskeletal problems in children.

The Times of India, a leading English daily, spoke to Dr. Sadiya Vanjara, who heads the department of physiotherapy and pain management at Noor Hospital, who said that there has been an alarming increase in the incidence of pain in the neck, shoulder, swelling of muscles from holding gadgets and even inability to sit and write for long hours among children.

The average hours children clock up slouching endlessly over gadgets totals up to six hours or more per day. These statistics can present a good idea of the extent to which their health is taking a wrong turn. Furthermore, by whiling away so much time on gadgets, children lose the time they can spend outdoors and their physical activity becomes nil.

According to the Times of India, Dr. Vanjara elaborated further on this, saying, “Children sit in a slouching position for hours altogether, causing discomfort to their back and spine, even affecting their posture. Swiping continuously on a screen obviously does not give them the required dexterity in the fingers or arm muscles. Further, the limited or non-existent outdoor activity robs them of the optimum vitamin and calcium levels.”

This is the worst thing to happen to your child. Reduced physical activity, courtesy the hours spent bending over those gadgets may result in your child becoming overweight, which predisposes them to various lifestyle diseases like diabetes and hypertension.

Cognitive development of children can slow down due to overuse of gadgets, causing attention deficit disorder. It may also hamper physical development and impair social skills.

Excessive us of gadgets can cause blurry or double vision, redness, dry eye syndrome, etc. Therefore, immediate measures need to be ensured in their lifestyle in order to avoid such problems.

Neck, back and shoulder pain along with posture problems are the primary concerns for children who resort to excessive gadget use.. Due to this, children are also predisposed to get spondylitis at an early stage in life.

Sleeping late or sleeping less is normally a given when gadgets are overused. Sleep deprivation can cause anxiety, increased hyperactivity and other behavioural issues.

Whey-based beverage can improve your health